KAMPALA — The dfcu Bank on Sunday, October 6 issued a statement denying the bank is shutting down 22 branches housed in the disputed Meera Investments Ltd buildings, but insisted that a review of the bank’s branch network was part of her digital strategy.

In the statement, the bank said:

“As we communicated at this year’s Annual General meeting in June, the Bank is in the process of implementing its digital strategy to drive better customer experience, improve efficiency and align its operations with emerging trends in the financial sector. This calls for continuous rationalization of branch operations and redesigning of the Branch model”.

The bank has since been ordered to vacate the buildings owned by the former’s landlord Meera Investments Ltd after it emerged that the dfcu Bank was misled by city Law firm Sebalu & Lule Advocates to transfer title properties. The law firm has since been banned from representing dfcu Bank in the dispute after being found guilty of conflict of interest.

The document titled Transfer of former Crane Bank household properties, dated May 8, 2017, exposed the transfer of land tittles that belonged to Sudhir’s Meera Investments Ltd as BoU handed the disputed properties to dfcu Bank without as part of the deal. The matter is under legal challenge.

An internal procurement document now shows that dfcu Bank intends to de-commission some of the branches housed in the properties under disputed as the legal battle between Sudhir and his companies against Bank of Uganda rages.

The city businessman has repeatedly defeated the central bank in the decided court cases so far.

In the last 24 hours there has been a false notice and other nonfactual stories circulating on social media.

The Bank wishes to clarify that the purported notice in respect to branch closures is false and did not originate from dfcu Bank.

The Bank further wishes to clarify as follows:

1. dfcu Bank is NOT closing 22 branches starting 14th October 2019 as alleged in the fake notice. The public is advised to disregard it.

dfcu Bank has a network of 63 branches spread across the country. As we communicated at this year’s Annual General meeting in June, the Bank is in the process of implementing its digital strategy to drive better customer experience, improve efficiency and align its operations with emerging  trends in the financial sector. This calls for continuous rationalization of branch operations and redesigning of the Branch model.

The Bank has, in the last two years, enhanced some and introduced new  alternative delivery channels like Agent banking, Online banking and  Mobile banking to support its digital agenda.

dfcu will continue to align the Branch network to leverage these alternative channels.

dfcu would like to reassure all its customers, stakeholders and the general  public that the Bank continues to focus on its mandate of making more possible for Ugandans through the provision of superior financial services that transform the economy and enhance the well-being of the people. 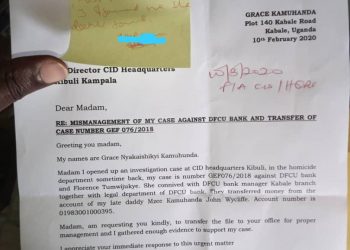