The coveted award ceremony was the first of its kind in the region; held on June 19, 2019, at the White Sands Hotel Beach Resort in Dar es Salaam, Tanzania.

According to the organisers of the awards, the major purpose of the awards is to identify talent and people which they say helps the organization to perform and take the business to the next level.

SBI International Holdings AG is a global construction and development group with a portfolio of hundreds of landmark projects.

According to SBI’s Operations Manager, Jackie Magayane the group was established in 1958 and has since gained a great reputation in all areas of civil engineering, development, and construction.

SBI Uganda has a solid financial base and implements turnkey projects, EPC contracts, joint ventures, and standard procurement contracts among other related roles.

This year’s debut edition of the awards invited East African Countries to participate in the annual show by attracting over 50 top companies from the East African region to add value to the subcontinent.

Some of SBI’s current projects include the upgrade of the Mukono-Katosi-Nyenga Rd that measures over 74 Kilometers, they have also done the design and Built the Mukono – Kayunga – Njeru Rd measuring a staggering 92.5 Km 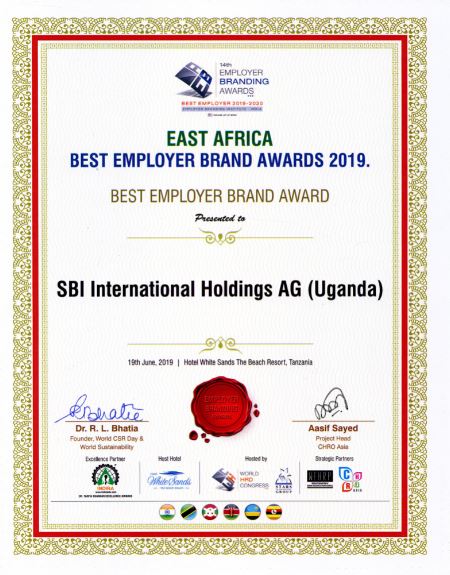 The award-winning company has also participated in the development of the Kabaale International Airport in Hoima.

The other prominent companies that participated in the East Africa Best Employer Brand Awards 2019 include:

The Employer Branding Institute is a virtual organization where senior leaders in Human Resource connect with each other in the cyberspace to share the best practices in Employer Branding and outstanding professionals in several countries.

The EB Institute’s mission is to contribute to “Talent Management, talent development and talent innovation.” The institute has a global presence in other continents like Asia and does similar work in several Asian countries.

With over 14 years of existence, the network of Employee Branding Institute is increasing in size and stature with several H.R leaders from over 36 Countries, recommended individuals and organizations that are doing exemplary work.