His revelation ends the uncertainty over Umeme’s future in Uganda’s energy sector as electricity supplier.

“With respect to power distribution, the distribution concession with Umeme Limited will be renegotiated and extended to ensure further investment, and also lower electricity tariffs,” Kasaija told MPs and the whole country at the reading of the 2019/20 budget speech on Thursday June 13 2019, at Kampala Serena Hotel.

Umeme’s contract is expiring in 2025, but there has been speculation the company might not get its concession renewed.

The speculation was heightened by a letter last year by President Yoweri Museveni where he accused the company of deliberately maintaining technical losses high (17%), which was costly to the taxpayers, despite the company claiming to have invested more than $500m in the industry.

The president then ordered that it was high time the country looked for Umeme’s replacement.

President Museveni also tasked the ministry of Energy to explain the incessant cost of power, with tariffs charged by UMEME remaining astronomical despite significant reduction in technical and commercial losses incurred by the power distribution company.

However, change in tone shows Umeme has been able to convince the government that it was the best candidate for the job.

High Voltage Electricity transmission grid infrastructure now totals 2,258km. Later this year, the 600MW Karuma is expected to be launched and this will be installed electricity generation capacity to nearly 2,000MW. 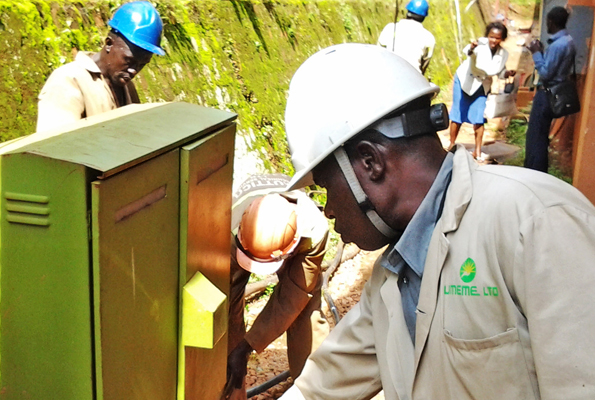 The task to Uganda Electricity Transmission Company Limited, which buys power in bulk, and Umeme is to make sure this power reaches the bulk users.

Umeme leaders have said they needed up $1bn to build a network to distribute the extra power being produced.

Last month, City businessman Patrick Bitature, the Chairman of Umeme Uganda Ltd board at the firms 6th Annual General Meeting at Serena Hotel in Kampala revealed that government had summoned Umeme to re-negotiate a long term concession, following an impasse in the recent past.

Much as Umeme still has six years ahead on their contract, Bitature said: “it in both parties’ interest to start negotiating a concession now because we have Karuma Power that is imminent, Isimba is now already switched on and we need to evacuate this Power.”

According to a recent Umeme AGM, NSSF is the largest shareholder with a 23% stock in the power distributor.

Umeme chairman Bitature recently noted that the firm will need to invest between USD1 billion and USD1.5 billion over the next five to ten years.

He said this will enable Umeme to create a vigorous distribution network to last the country for over 20 years.

Mr. Bitature said that over the next 6 years, Umeme estimates to invest up to USD450 million in capital expenditures (CAPEX) alone.

Mr. Bitature also said that Umeme was willing to reconsider their rate of return- currently at 20% since the investment environment had greatly improved, since 2005 when the concession was signed.

“Today the perceived high risk of the country is much lower than then, so it is easier to attract capital. The policies of this country have been very stable, the movement of foreign exchange, the amount of inflation etc. the risks in many of the areas have been mitigated.

If the high rate of return is the pain in the thigh of the government and the public, we are willing to consider a few points on our rate of return, as long as it makes business sense- for our customers and shareholders,” he told CEO East Africa Magazine.