KAMPALA – The High Court has issued an order to attach accounts of Bank of Uganda and dfcu Bank accounts to recover UGX. 98 million arising out of a court award to a former Crane Bank employee who successfully sued the two, for unlawful deductions to his account.

In his ruling on January 15 this year, Justice David Wangutusi ordered dfcu Bank to pay Mr Shakil Pathan Ismail UGX62 million compensation, general damages of Shs 20 million and costs of the suit, plus an interest rate of 21 percent of the total sum from April 2016.

In a Friday, May 24 order, High Court deputy registrar Flavia Nabakooza commanded both Bank of Uganda and dfcu Bank to appear before court on June 4, and show cause why their accounts should not be attached.

“Costs of this application are to be met by the judgment creditor,” 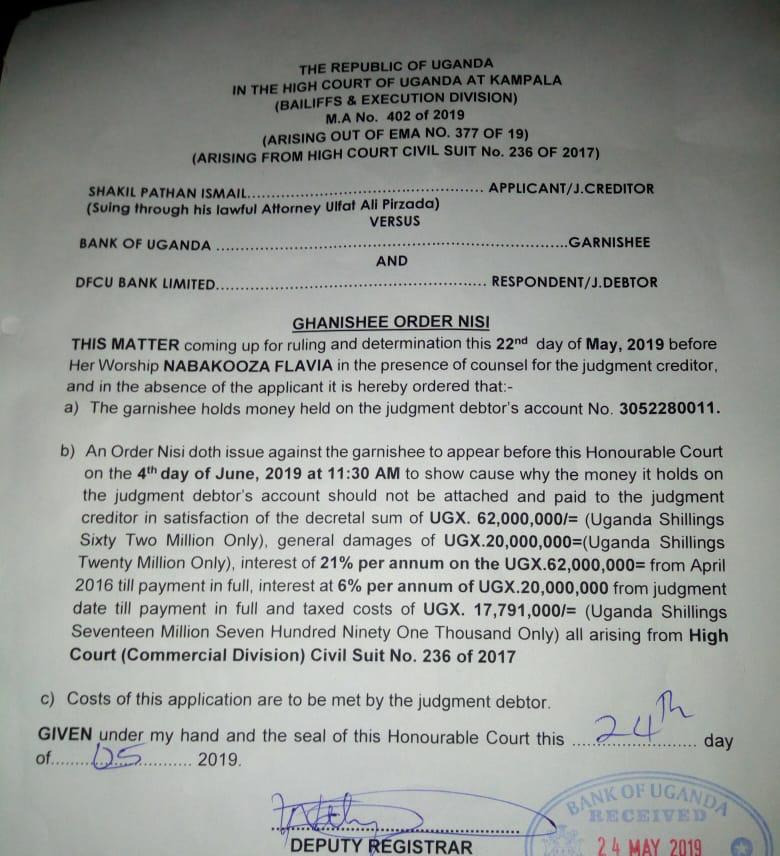 In his original suit, Mr. Ismail complained that the former Crane Bank management had blocked and deducted his salary to the tune of Shs 62 million without reason.

Crane Bank Ltd, owned by city tycoon Sudhir Ruparelia, was closed by Bank of Uganda in October 2016 and later controversially sold to dfcu Bank in January 2017.

In his ruling January 15, Justice Wangututsi declared that dfcu Bank can suffer all previous liabilities inherited from Crane Bank- provided the victims of these liabilities, were never privy to the purchase of Crane Bank Assets & Liabilities. In rejecting an application by dfcu Bank filed by city law firm MAKKS Advocates seeking to add Crane Bank as a defendant, Justice Wangutusi indicated that owing to an earlier ruling, the firm and that of city lawyer David Mpanga cannot represent any entity in any case against Crane Bank because an earlier court inquiry found them “conflicted”.

In December 2017, the Commercial disqualified Mr Masemmbe and Mr Mpanga from the sh397b Sudhir Ruparelia’s case against Bank of Uganda (BoU), citing conflict of interest.

Mr Sudhir has since indicated that he is determined to defend his Ruparelia Group’s integrity following the “dubious takeover” of Crane Bank, and fight to recover it after findings of the Auditor General and Parliament’s Committee on Commissions, Statutory Authorities and State Enterprises [COSASE] found out that it’s closure and six other banks, breached several provisions of the Financial Institutions Act 2014 and was therefore illegal.