KAMPALA – The Bank of Uganda has instructed veteran advocate Joseph Byamugisha to represent them in the fresh suit filed by city tycoon Sudhir Ruparelia, who is seeking orders to dismiss an earlier suit brought against the businessman and his Meera Investments Ltd.

In a May 17, notice to the High Court, the central bank has confirmed having instructed Mr Byamugisha, through his Byamugisha & Co. Advocates, confirming that they have since kicked out Sebalu & Lule Advocates, who were on April 29, declared conflicted, and therefore unfit to represent the parties in a longstanding commercial dispute.

In his April 30 ruling, Justice Paul Gadenya Wolimbwa, kicked Sebalu & Lule Advocates out of any commercial disputes involving, Mr. Ruparelia and his Crane Management Services, because “the Applicant has made out a case that the first respondent (Sebalu & Lule) has relevant information of the applicant. The information is relevant and I accordingly grant an injunction restraining the first respondent from handling any case involving the applicant”.

The judge ordered the respondents to “pay costs of this application”.

In his ruling delivered on December 21, 2017, the head of the commercial court division, Justice Wangutusi stated that Mr. David Mpanga of A.F. Mpanga Advocates and Timothy Masembe of MMAKS Advocates acted in violation of the Advocates (Professional Conduct) regulations.

Mr Ruparelia has this week confirmed that he is determined to take on the Bank of Uganda to recover his closed Crane Bank Ltd.

The central bank in October 2016 closed Crane Bank Ltd, previously one of the best performing banks before controversially selling it dfcu Bank in January 2017 for a paltry UGX200 billion. The central bank has since come under the spotlight after the closure Crane Bank Ltd backfired with both Parliament and the Auditor General faulting the BoU officials in the middle of the transaction.

The dfcu Bank which received some of the assets and liabilities of Crane Bank has since been allowed to operate in different branches whose ownership belonged to Meera Investments Ltd, one of the companies owned by Mr. Rupaleria.

After closing Crane Bank and selling it off, the Bank of Uganda then sought to take Mr. Ruparelia to court personally and to purportedly recover UGX400billion from him and 48 land titles that housed Crane Bank branches.

But in the latest application, Mr. Sudhir’s lawyers have argued that under the Land Act, the closed bank cannot own land.

In the application lodged to court on April 30, Kampala Associated Advocates want court to strike out the suit because of the central bank purported to sue Mr. Ruparelia and his Meera Investments Ltd through Crane Bank (in receivership), using an expunged process and false records. 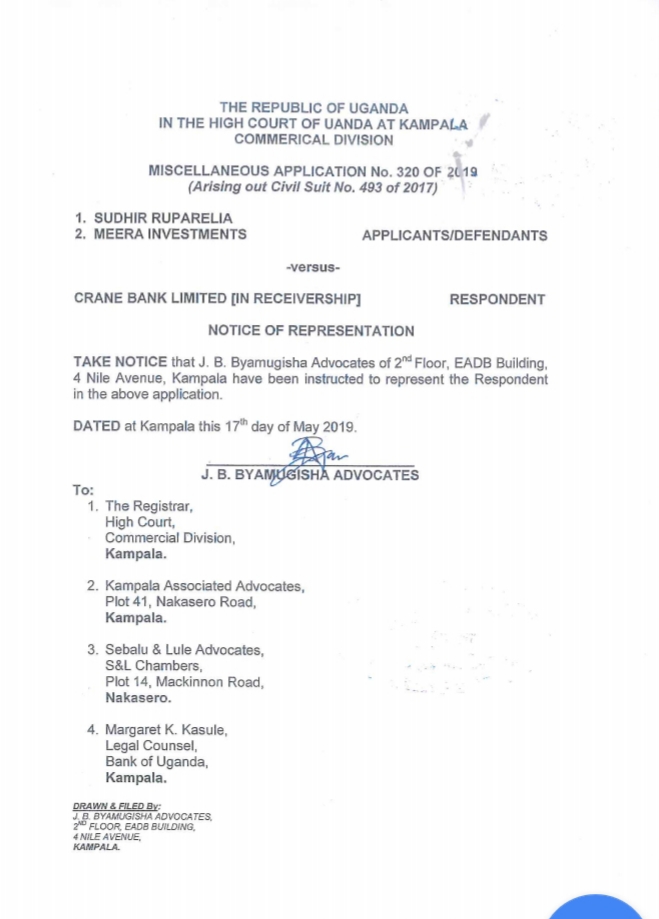 The latest action by BoU to instigate transactions on a matter under contention in court may kick off yet another storm as Mr. Sudhir digs on in his quest to get back his bank.

In an interview with the CEO East Africa Magazine this week, the businessman indicated that he is determined to defend his Group’s integrity following the “dubious takeover” of Crane Bank.

“As you are aware, we are in court contesting what we believe was an unjustified closure of our bank, but also the rushed negligent and fraudulent manner in which it was closed. So there is only little we can say at this moment as the matter is subjudice. However, our claims have so far been proven by the findings of the Auditor General and Parliament’s Committee on Commissions, Statutory Authorities and State Enterprises [COSASE] who found out that the closure of Crane Bank and six other banks, breached several provisions of the Financial Institutions Act 2014 and was therefore illegal” he said.

Parliament’s Committee on Commissions, Statutory Authorities and State Enterprises in February released her report and made groundbreaking recommendations against Bank of Uganda and individuals named in what the MPs termed as “unlawful” closure of some commercial banks.

The COSASE inquiry into the conduct of Bank of Uganda and it’s officials in the closure of seven banks, with some ending up in massive controversy that lasted for the last three months brought into focus the mismanagement of closed banks by BoU after the Auditor General Mr John Muwanga issued a stinging criticism of the central bank in a special audit that cited massive flaws in the closure of Teefe Bank (1993), International Credit Bank Ltd (1998), Greenland Bank (1999), The Co-operative Bank (1999), National Bank of Commerce (2012), Global Trust Bank (2014) and the sale of Crane Bank Ltd (CBL) to dfcu (2016).