With the Serie A now up and running, all the major five leagues in Europe are now in action.

This past weekend produced less of shocks as most of the big boys registered anticipated victories in their respective fixtures.

In Spain, defending champions Barcelona came from a goal down to register a 5-2 victory over Real Betis, their first of the 2019/20 campaign.

Still without the injured Lionel Messi plus Luis Suarez and Osman Dembele, Barca suffered an early scare as they went behind to a Nabil Fekir goal on 15 minutes.

However, they recovered to ensure that they are level by halftime through Antoine Griezmann. Griezmann added a second just after the break to turn the game on it’s head before Carles Perez, Jordi Alba and substitute Arturo Vidal all scored to see the home side take a 5-1 lead. Loren Moron pulled one back for the visitors but it turned out to be a mere consolation as Barca sealed their first victory of the season after two games.

In the capital, Real Madrid were held to a disappointing 1-1 drew at home to Real Valladolid. After a tense opening 80 minutes, Karim Benzema broke the deadlock with 8 minutes to play but as Real tried to hold onto the victory, the visitors had other ideas. Sergi Guardiola equalized with just two minutes on the clock to silence the Bernabeu and hand his side an unlikely point in the end.

For Real’s cross-city rivals Atletico, they moved joint top of the standings after scrapping to a 1-0 victory away to Leganes.

As anticipated, it was a tough contest and Diego Simone’s side had to wait until 19 minutes from time before Vitolo scored the all-important goal that puts them second on the log.

Sevilla like Atletico also still hold a 100% record after overcoming Granada 1-0 away from home on Friday. Joan Jordan scored the only goal of the night 7 minutes into the second half. This is the second victory in as many games since the start of the league two weeks ago.

Elsewhere in Spain, Levante came from behind to beat Villareal 2-1, Celta Vigo bounced back from their opening day defeat to overcome Valencia 1-0 at the Abanca Balaidos while Sociedad were 1-0 winners at Mallorca.

The other four games in the La Liga all ended in draws.

In the German Bundesliga, Bayern Munich bounced back from an opening day 2-2 draw at home to Hertha Berlin, defeating Schalke 3-0 at the VELTINS Arena.

Star striker Robert Lewandowski continued his fins start to the season, scoring all three of the Barivians’ goals. The Pol now has five in two games having also scored a brace on opening weekend.

In the same game, Philip Coutinho who had joined Nico Kovac’s side earlier in the week, came off the bench 12 minutes into the second half, to replace Thomas Muller.

As Bayern were registering their first victory, rivals Dortmund were also winning away from home.

Lucien Favre’s side who came into the game top of the standings came from a goal down to defeat newly promoted Koln 3-1. Jordin Sancho, Ashraf Hakimi and Paco Alcacer scored the goals for Dortmund who still hold a 100% record after two games.

Four other sides hold the same record as Dortmund; Freiburg, RB Leipzig, Wolfsburg and Leverkusen are also yet to drop a point this season.

This past weekend, Freiburg beat up on Paderborn 3-1, Leipzig were 2-1 home winners against Frankfurt, Wolfsburg powered past Hertha 3-0 while Leverkusen defeated Dusseldorf 3-1 away from home.

Elsewhere in Germany, Hoffenheim were 3-2 winners at home to Bremen, Gladbach registered their first victory as they beat Mainz 05 while Augsburg were held to a 1-1 draw at home to Union Berlin.

In the Italian Serie A, defending champions Juventus started their title defence with a scrappy 1-0 victory away to Parma.

On a weekend that was littered with goals, Napoli came from a goal down to beat Fiorentina 4-3 in a thriller. Eric Pulgar put the hosts ahead via the spot on 9 minutes but Napoli scored twice-through Dries Mertens and Lorenzo Insigne-before halftime to turn the game on its head.

After the break, Nikola Milenkovi levelled matters for Fiorentina 6 minutes after the break but Jose Callejon put Napoli once ahead once again five minutes later. With 25 minutes to play, debutant Kevin Prince Boateng levelled the game but Insigne ensured victory for Napoli two minutes later.

AC Milan new manager Marco Giampaolo got off to a poor start as his side were beaten Udinese. Rodrigo Becao scored the all-important goal with 18 minutes to play.

In Rome, AS Roma were held to a thrilling 3-3 draw at home to Genoa. Roma who took the lead three times in the game, scored through Cengiz Under, Edin Dzeko and Alexandre Kolarov while Genoa’s goals were scored by Andrea Pinamonti, Domenico Criscito and Christian Kouame.

In Ligue One, PSG returned to winning ways this past weekend as they defeated Toulouse 4-0 at the Parc de Princes.

It was not as easy as the score-line suggests and Tomas Tuschel’s side had to wait until the 50th minute to get the break through-Eric Choupo-Moting scoring the goal.

The Cameroonian international struck one again either side of Mathieu Goncalves’s own goal and Marquinho’s first of the campaign.

PSG who have started the season without want-away superstar Neymar Jr have now won two and lost the other of their three games.

Monaco continued their trend of seeing a player sent off as they threw-away a 2-0 lead to draw 2-2 at home to Nimes.

Just like in the opening two fixtures, this time it was Jemerson who was shown red in the 55th minutes with Monaco leading thanks to first-half goals by Islam Slimani and Wassim Ben Yedder.

The one-man advantage was the catalyst that Nimes required to get back into the game as Romain Philippoteaux and Ahoueke Denkey scored in the last 20 minutes to grab a point.

Elsewhere in Ligue One, Nantes, Bordeaux, Angers, Brest and Rennes were all victorious in their respective fixtures.

All La Liga Results from the past weekend

All Bundesliga results from the past weekend

All Serie A results from the past weekend

All Ligue-One Results from this past weekend 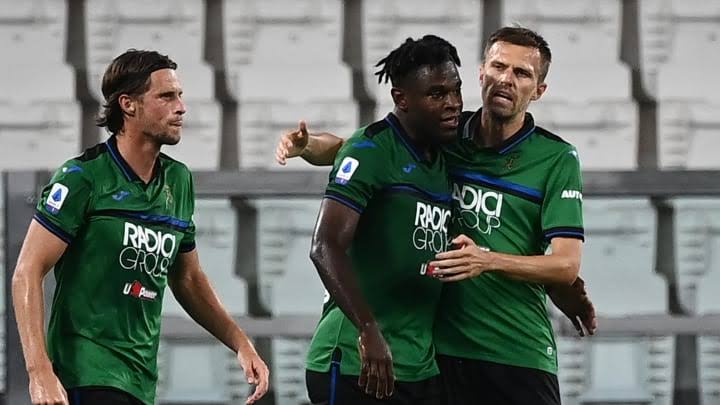