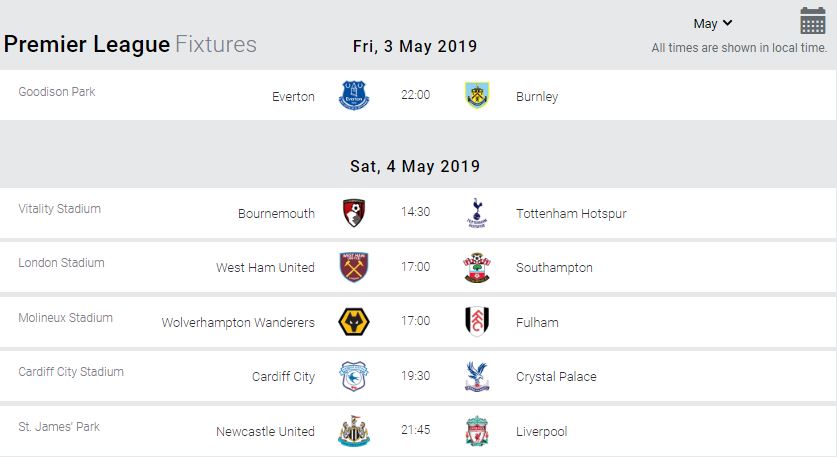 Everton have no new injury concerns, although Andre Gomes serves the final match of a three-game suspension. Theo Walcott has overcome illness, and Yerry Mina could return from a hamstring injury.

Burnley are set to welcome back Peter Crouch following an appendix operation, while Phil Bardsley may return from a gashed leg. Robbie Brady is also available after missing last weekend for the birth of his second child.

Everton have lost three of their past five Premier League games against Burnley, as many as they had in the previous 16 top-flight meetings. Burnley can win consecutive league matches at Goodison Park for the first time since a run of three victories between 1958 and 1960.

Tottenham are without defender Jan Vertonghen because of the head injury he suffered against Ajax on Tuesday. Serge Aurier, Harry Kane, Erik Lamela and Harry Winks are still absent, but Son Heung-min and Vincent Janssen are available after missing the Ajax match.

Tottenham are unbeaten in all seven Premier League meetings, winning six and conceding just two goals. Spurs average 3.1 goals per game against Bournemouth in the top flight, their best record against any Premier League side. Their only meeting outside the Premier League was back in 1957 when Bournemouth won an FA Cup fifth-round tie 3-1 at home.

It’s 18 defeats for Spurs in all competitions this season, their most in a campaign since they they were beaten 19 times in 2008-09. Tottenham have lost 11 matches in 2019, including four of their past five. They lost 11 competitive fixtures in the whole of 2018. Mauricio Pochettino’s side have suffered 12 Premier League defeats so far this season – only two teams have lost more and still finished in the top four: Chelsea in 1997-98 (15) and Everton in 2004-05 (13). Tottenham had the division’s best away record at the end of January but they and Huddersfield are the only Premier League sides not to earn a point on the road since then. Son Heung-min has scored five goals in his past four games against Bournemouth, his joint-highest tally against a single club along with Watford.

West Ham’s injury problems are easing, with Samir Nasri, who has missed five games with a calf strain, among those set to return. Manuel Lanzini and Aaron Cresswell are fit again, while Carlos Sanchez could make his comeback from a knee injury.

Southampton will again be without Maya Yoshida and Jannik Vestergaard because of illness and injury respectively. Mario Lemina could start for the first time since returning from an abdominal problem.

West Ham are aiming to do a league double over Southampton for the first time since 2000-01. The Hammers have come from behind to win in seven Premier League games against Southampton. This is the 100th league fixture between the clubs. A different West Ham player has scored twice in each of the past three Premier League meetings: Javier Hernandez, Marko Arnautovic and Felipe Anderson.

Wolves could name the same starting line-up for a third consecutive game. Head coach Nuno Espirito Santo has indicated that third choice goalkeeper Will Norris, 25, may feature in one of their two remaining matches.

Fulham are winless in 14 league and cup games away to Wolves since a 4-0 victory in the second tier in April 1985 (D4, L10). The Cottagers have lost three of their four Premier League games at Molineux, conceding twice in each of those defeats.

Kenneth Zohore should be fit for Cardiff but Aron Gunnarsson is a doubt and Harry Arter is likely to miss out. Sol Bamba, Callum Paterson, Joe Ralls and Matthew Connolly are all sidelined for the remainder of the season.

Crystal Palace will be without Christian Benteke, who took a blow to his cheekbone during the draw with Everton and has not trained all week. Mamadou Sakho, James Tomkins, Jeffrey Schlupp and Pape Souare are also ruled out by injuries.

Cardiff have failed to score in all three previous Premier League meetings, losing twice and drawing the other. The Bluebirds have won only one of their last five league matches against Palace (D1, L3), a 2-1 home Championship triumph in 2012. However, the Eagles have recorded just one victory in their previous nine trips to Cardiff (D4, L4). 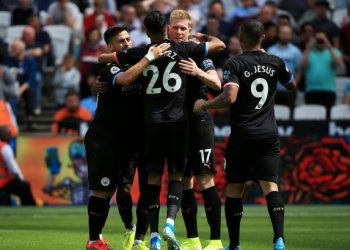 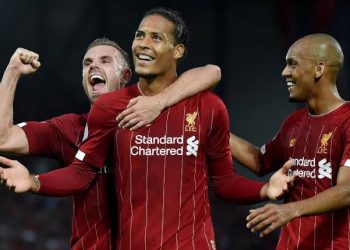