Vipers in must win situation away to Police

LUGOGO – 2018/19 will be a year to forget for everyone associated with Vipers SC.

The Venoms have extremely underperformed this season and will most definitely end the season empty handed despite competing for five honours at the start.

At the start of the season, Vipers lost to KCCA FC 4-2 in penalties during the Super Cup. The Venoms then went on to exit both the CAF Champions League and Confederations Cup in their initial stages.

With a few months to the end of the season, the Kitende based side were eliminated for the Uganda Cup by Big League side Proline FC to leave them competing for only the League.

Last week, Nam Ouma’s side were defeated 2-1 at home by URA FC, leaving them 9 points behind leaders KCCA FC with only three games to play.

With the Kasasiros only one point away from sealing the StarTimes Uganda Premier League, everyone at Kitende knows that they will be relinquishing the crown they won last season and there is nothing they can do about it, save for praying for a miracle.

As they try to somehow keep their slim hopes alive, they come up against one of the stand out performers in the League this season.

Despite sitting in 9th on the log, the Cops have scored the second most total of goals (40). Only KCCA FC (52), have scored more goals this season than Police.

The goals go in at the front end but the team’s down fall has been the inability to shut out opponents.

Going into Tuesday’s game, Abdallah Mubiru’s side have conceded a League third most 42 goals with only the bottom two of Paidha Black Angels (47) and Nyamityobora (46), letting in more.

If they can shut out Vipers at the back end, a victory over the Venoms is very much with the reach of Police.

Vipers’ Tom Masiko who is suffering from a fever will have to face a late fitness test ahead of this match. Bobosi Byaruhanga limped off during the match against URA FC and is ruled out of this game with an ankle injury. Dan Sserunkuma is back in the squad after serving his one match suspension for accumulating three yellow cards. Taddeo Lwanga is suspended for this tie after accumulating three yellow cards accumulation. Halid Lwaliwa is still out nursing a groin injury.

Police FC come into the game a little depleted with midfield gems Hassan Kalega and Ashraf Mugume ineligible to play against parent side while wingers Johnson Odong and Ruben Kimera are doubtful for the tie as well as left back Arafat Galiwango.

This will be the 19th meeting between the two sides since November 2011.

In the previous 18, Vipers have triumphed on 10 occasions, Police 4 times with the other four ending in stalemates.

However, Police have won both of their last two League meetings with Vipers scoring four goals and conceding only one.

The reverse fixture last season ended in a 2-1 win for Police before Vipers defeated the Cops 1-0 in this season’s first round.

Police come into the game on a four game unbeaten run, winning two and drawing the other two. Their last League loss came against Bul FC (2-1) at the start of last month.

At home, the Cops have lost only one of their last 11 League games (W7 D3). The only defeat in that period was in the 4-1 loss against Nyamityobora on January 29th.

For Vipers, they come into the game on the back of a three game winless run (D2 L1). Their last victory in the League was against Maroons, defeating the Prison side 2-0 at Kitende at the end of last month.

The Venoms have also been in wanting form away from home lately as they are winless in their last 5 travels (D4 L1). Their last victory away from home was in the 1-0 win against Nyamityobra at the start of February.

The other games to be played on Tuesday @4:30pm:

Barca, Real both away from home in La Liga mid-week action 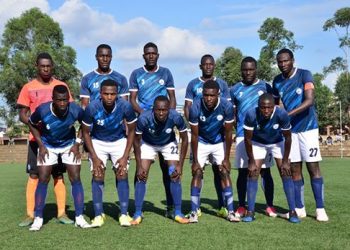 Barca, Real both away from home in La Liga mid-week action