Revenge is to be high on Robert Kovac’s mind when he takes his title chasing Bayern Munich side to Borussia Park to face Dieter Hecking’s Gladbach in Saturday’s late kick off.

The Bavarians have recovered from a shaky start to the Bundesliga season by collecting thirty out of the last thirty three available points to move within striking distance of leaders Borussia Dortmund.

Borussia Moenchengladbach were one of a cluster of teams responsible for Kovac’s early season misery as they maintained their reputation of giving Bayern Munich a bloody nose by winning 3-1 at the Allianz Arena courtesy of a brace from then newly recruited French striker Alassane Plea.

An indifferent run of form after the winter break has seen Gladbach surrender interest in the title. Injury to lead striker Plea and kamikaze defending has seen their previously impregnable home fortress twice breached by identical 0-3 losses to Hertha Berlin and Wolfsburg.

Pacesetters Borussia Dortmund have a chance to extend their advantage atop the standings to six points when they travel to relegation threatened Augsburg on Friday.

An equally captivating match up takes place at the Commerzbank Arena in Frankfurt where the Eagles host Julian Nagelsmann’s revitalised Hoffenheim.

Fifteen goal Bundesliga top scorer Luka Jovic will be raring to go against a Hoffenheim side not noted for keeping clean sheets.

Another young Englishman, Reiss Nelson, will feature as part of the visitors’ striking cast.

Other appetising confrontations to look out for include the relegation six pointer at the Mercedes Benz Arena between hosts Stuttgart and Thomas Doll’s Hannover, RB Leipzig’s visit to rock bottom Nuremberg and the matchup between Bayer Leverkusen and Freiburg at the Bay Arena. 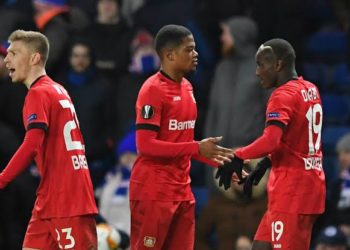