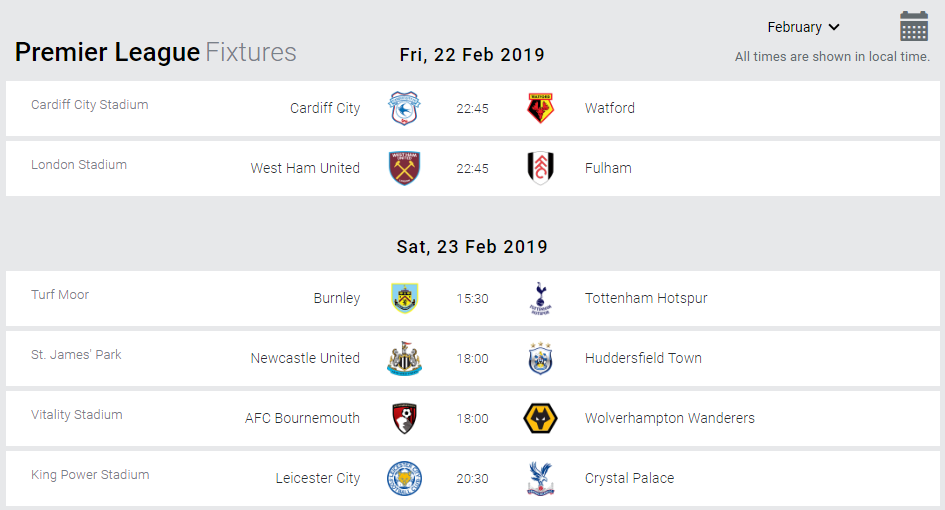 Cardiff are hoping midfielder Victor Camarasa will be fit to start against Watford following a calf injury. Camarasa, who came off the bench against Southampton, could be joined in the squad by Sean Morrison, five weeks after he had an appendix operation.

Watford trio Roberto Pereyra, Isaac Success and Sebastian Prodl are available after injuries. Kiko Femenia, who has a hamstring problem, is the only player unavailable to head coach Javi Gracia.

Watford have earned successive victories in this fixture and could equal their longest league winning streak against Cardiff. However, Cardiff have lost just one of the last six league meetings in Wales (W4, D1).

Manuel Lanzini may make his first West Ham appearance since tearing his anterior cruciate ligament in June, and Samir Nasri is also back in contention. Jack Wilshere remains sidelined but Marko Arnautovic, who came off the bench in the last game, could return to the starting line-up.

January signings Lazar Markovic and Havard Nordtveit are in contention to make their debuts for Fulham. Both players were short of fitness when they joined the club two weeks ago. Loanee Timothy Fosu-Mensah is once again available, having missed out against parent club Manchester United, so the injured Alfie Mawson is Fulham’s only expected absentee.

West Ham won 2-0 away to Fulham in December and are hoping to complete a league double against the Cottagers for the time since the 2008-09 season. Fulham won their first Premier League game away to West Ham in 2001 but they are winless in nine subsequent league visits (D4, L5).

Burnley wingers Robbie Brady and Johann Berg Gudmundsson are both fit despite missing the win at Brighton with muscle problems. Midfielder Steven Defour remains sidelined with a calf injury.

Tottenham striker Harry Kane and full-back Ben Davies are back in training after recovering from respective ankle and groin problems and could feature. Danny Rose has been suffering from illness and will be monitored, while Dele Alli remains sidelined.

Burnley are winless in their last nine league and cup games against Tottenham. The Clarets beat Spurs 4-2 on the final day of the 2009-10 season, but that is their only top-flight win against Tottenham in the past 44 years. Spurs have kept clean sheets in each of their last three visits to Turf Moor. This fixture could see Mike Dean become the first referee to show 100 red cards in the Premier League.

Tottenham have won all 16 of their Premier League games this season against sides currently outside the top eight. They are chasing their 12th league away win – which would be their highest total in a single season since a similar tally in 1984-85. Spurs have scored a league-high 12 Premier League goals from outside the penalty area this season, while Burnley have conceded a league-high 12 from that range. They have lost their last two away games in all competitions: at Chelsea in the Carabao Cup and at Crystal Palace in the FA Cup.

Bournemouth remain without injured pair Callum Wilson and David Brooks, while Junior Stanislas faces a fitness test on a thigh problem. Charlie Daniels is back after missing out at Liverpool for personal reasons and loanee Nathaniel Clyne, who was ineligible at Anfield, also returns.

Diogo Jota is available for Wolves, having recovered from the dead leg that ruled him out against Bristol City. Matt Doherty was substituted because of a knock in the last game but is fit. Star midfielder Ruben Neves, who featured as a substitute last weekend, is set to reclaim his place in the starting line-up.

Wolves beat Bournemouth 2-0 at Molineux in December and can record their first league double against the Cherries. Bournemouth have never lost a home league game against Wolves, winning two and drawing one of the three previous matches.

Newcastle are looking to do the league double over Huddersfield for the first time since 1964-65. Huddersfield’s only victory in their past 11 away league matches at St James’ Park came in the Championship in August 2016 (D5, L5). This is the 50th top-flight match between the sides.

Newcastle United midfielder Jonjo Shelvey is available for the first time in seven weeks after recovering from a recurring thigh injury. Ki Sung-yueng, Paul Dummett and Joselu are also fit, while Miguel Almiron could make his first Newcastle start.

Huddersfield goalkeeper Jonas Lossl and defender Chris Lowe are in contention to return after missing the defeat by Arsenal because of illness. Isaac Mbenza, Danny Williams and Abdelhamid Sabiri remain out.

Crystal Palace have won each of the past three Premier League meetings, by an aggregate score of 9-0. Leicester lost the corresponding fixture 3-0 last season but have never lost consecutive top-flight home games against Crystal Palace.

James Maddison and Ben Chilwell are fitness doubts for Leicester but Nampalys Mendy is available after missing the defeat by Spurs. Marc Albrighton and Daniel Amartey are long-term absentees.

Crystal Palace defenders Aaron Wan-Bissaka and Martin Kelly have been ruled out because of injuries. Wilfried Zaha returns after a two-match ban, while Cheikhou Kouyate and James Tomkins recovered from injuries to make the bench at Doncaster last Sunday. Roy Hodgson will become the oldest manager in Premier League history on Saturday, aged 71 years and 198 days.

Arsenal are unbeaten in their last 23 home league games against Southampton (W17, D6). Southampton have won never won at Arsenal in the Premier League (D5, L14). However, Saints are looking to complete their first league double over Arsenal since 1988, when a 17-year-old Alan Shearer scored a hat-trick on his first league start.

Arsenal hope captain Laurent Koscielny will be fit despite him limping off in Thursday’s Europa League win. Alexandre Lacazette is available after being suspended for that match but Ainsley Maitland-Niles is struggling with illness.

Southampton forward Michael Obafemi could feature for the first time since mid-December after recovering from a hamstring injury. Stuart Armstrong, who has had a minor calf problem, is also fit again.

Arsenal are unbeaten in 12 Premier League home games, winning six in a row ahead of Sunday. The Gunners have conceded 999 Premier League goals – only seven teams have so far conceded 1,000. Fulham are the only club to have kept fewer Premier League clean sheets this season than Arsenal, whose four have all come at home. Arsenal have come from behind to earn 12 points this season – second only to Leicester’s tally of 13. Alexandre Lacazette could become the first Arsenal player to score in four consecutive Premier League home matches since Robin van Persie netted in five in a row from December 2011 to March 2012. Pierre-Emerick Aubameyang has scored 25 goals and provided eight assists in 38 Premier League appearances, and has scored six goals in his last six home league games.

Manchester United are optimistic that Jesse Lingard and Anthony Martial will be fit after respective hamstring and groin injuries. David de Gea is set to return in goal after making way for Sergio Romero in the FA Cup win at Chelsea on Monday.

Liverpool’s Virgil van Dijk returns after being suspended for the midweek draw with Bayern Munich. But fellow defender Dejan Lovren will miss out again with a hamstring problem.

Manchester United have won seven of their past nine home league games against Liverpool (D1, L1). Liverpool’s most recent win at Old Trafford was 3-0 in March 2014. Liverpool won the reverse fixture 3-1 and are looking to do the Premier League double over Manchester United for the first time since 2013-14. There has not been a red card in any of the last seven Premier League meetings in this fixture.

United have won eight of their last nine Premier League matches.They have kept just one clean sheet in their 12 Premier League home games this season, a joint-division low. A seventh successive home fixture without a clean sheet would represent United’s worst top-flight run of conceding since an eight-match streak in 1972. Ole Gunnar Solskjaer has won 25 points in his nine league games as United manager. The record points total for a manager in their first 10 games in charge of a Premier League side is also 25, set by Guus Hiddink with Chelsea. David De Gea has kept 99 clean sheets in the Premier League. He could become the 15th different keeper to record 100, and just the seventh to do so with a single club. Paul Pogba has scored eight goals and provided five assists in his last nine Premier League games. He could become the first United player to score in five consecutive home league fixtures since Robin van Persie in 2013.

Liverpool have lost just once in this season’s Premier League – and that was against leaders Manchester City. But they are winless in their last seven away fixtures against sides starting the day in the top four. The Reds have scored in every away match in this season’s Premier League. They have conceded just eight away goals in the division this campaign – and 15 in total – fewer than any other team. Mohamed Salah has scored 49 Premier League goals for Liverpool – if he scores in this game, he will have 50 in just 63 games, making him the fastest player to reach the milestone for a single club. Sadio Mane could become the fifth Liverpool player to score in five consecutive Premier League matches. Jurgen Klopp has not won at Old Trafford in any of three of his visits there as a manager (D2, L1).