Liverpool out to examin Arsenal progress as Premier League continues 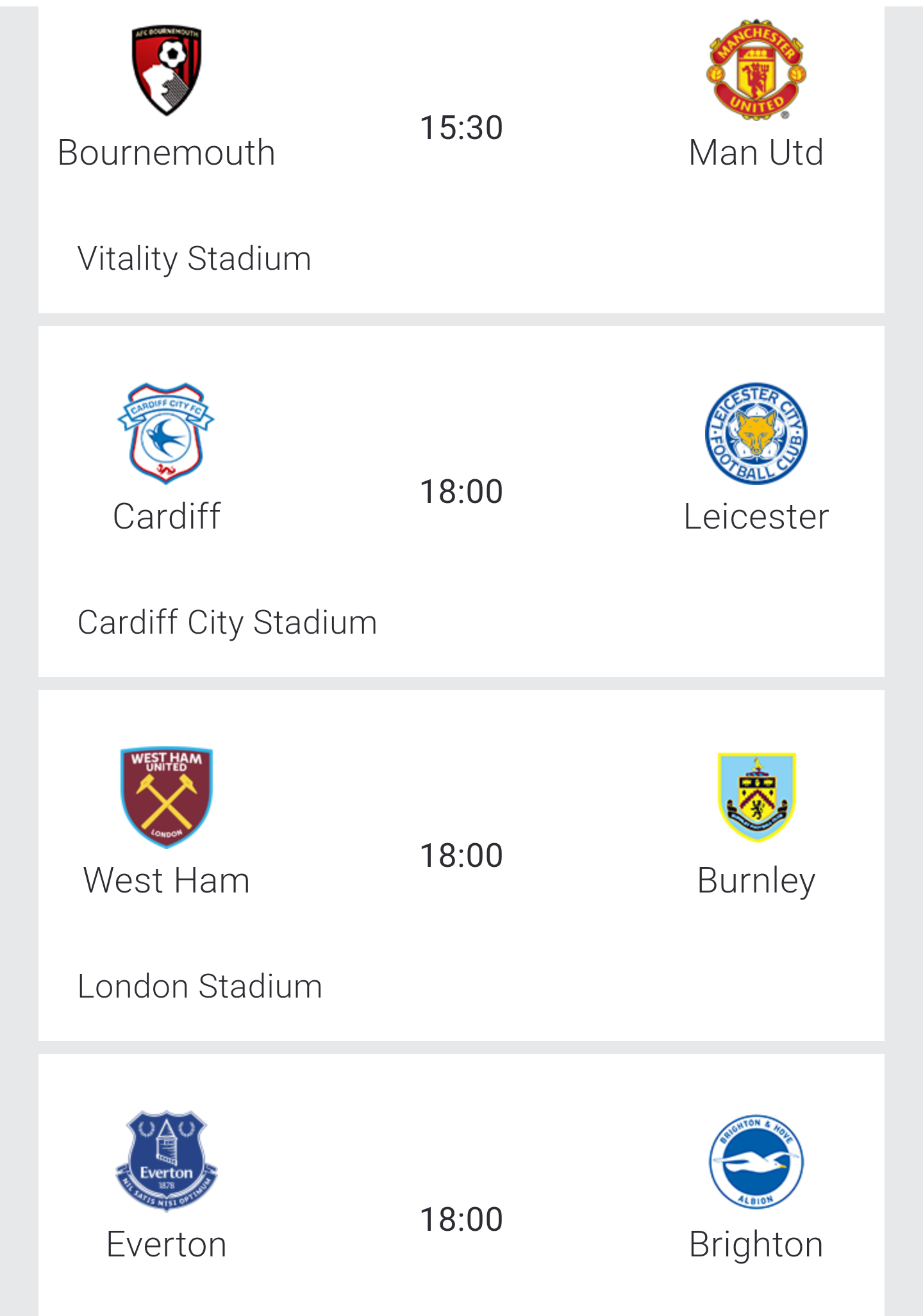 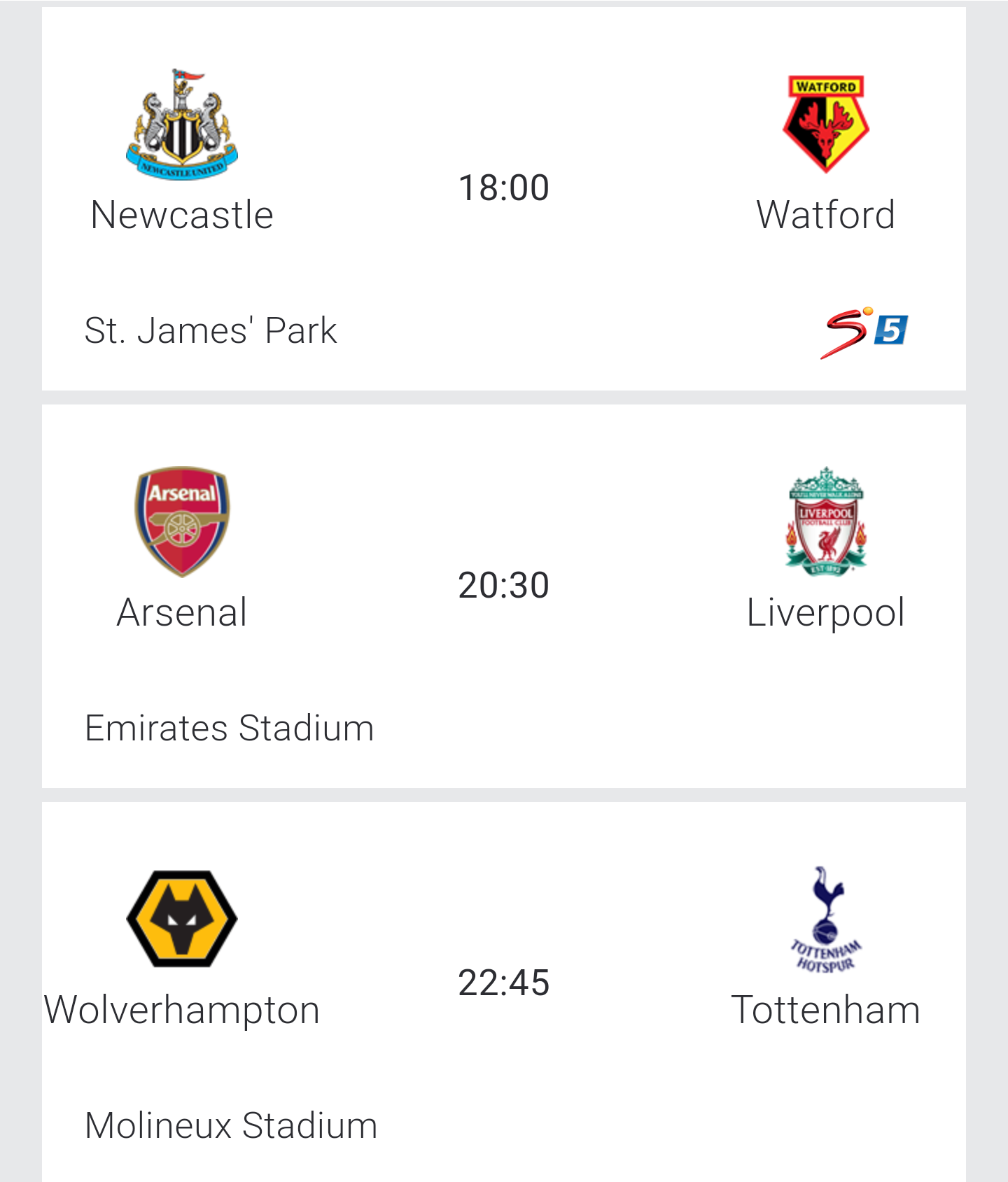 Manchester United will be hoping they can follow up last week’s 2-1 home win over Everton with a triumph over Bournemouth in Saturday’s lunch time kickoff.

Bournemouth are again without Joshua King, who is nursing an ankle problem. Captain Simon Francis is doubtful with a groin injury and will be given a late fitness test.

Manchester United boss Jose Mourinho must decide whether to recall striker Romelu Lukaku, who began on the bench against Everton. Jesse Lingard, who made his comeback from injury as a late substitute in that game, will also hope for a recall to the starting line-up. Captain Antonio Valencia is still absent with a knee injury, while Marouane Fellaini and Diogo Dalot also remain sidelined.

Bournemouth won their first Premier League game against Manchester United in 2015 but are winless in the five subsequent meetings, losing four times. United have won on their last two visits to the Vitality Stadium, scoring five goals and conceding just one.

Leicester manager Claude Puel says Saturday’s result is not important, but that the team will play to honour owner Vichai Srivaddhanaprabha, one of five people who died in a helicopter crash last weekend. Captain Wes Morgan is available after completing a suspension. However, Daniel Amartey will be sidelined for four months following ankle surgery.

Cardiff midfielder Joe Ralls serves the final game of a three-match ban. Harry Arter, who is one booking away from suspension, may return to the starting line-up. Jazz Richards is out with an injury sustained in training, while Danny Ward, Lee Peltier and Nathaniel Mendez-Laing remain sidelined.

Cardiff have lost just one of their last six meetings with Leicester in all competitions (W2, D3). This will be the first top-flight meeting between the sides since 1962. Leicester have won the last three encounters at the highest level, scoring 10 unanswered goals.

Everton have never lost at home to Brighton in six matches in all competitions, winning four and drawing two. Brighton have beaten the Toffees just once since 1924, a 3-1 home triumph in the top flight in 1982. That was one of only two Brighton victories in 13 meetings overall (D5, L6).

Everton boss Marco Silva will be without defenders Phil Jagielka and Jonjoe Kenny because of minor injuries. Midfielder James McCarthy is stepping up his return from a broken leg and played for the club’s under-23 side this week.

Brighton remain without the key duo of Pascal Gross and Davy Propper because of ankle injuries. Gross has not played for two months while Propper has been absent since the win over West Ham on 5 October.

Newcastle United defender Ciaran Clark has returned to training following an illness but won’t be involved against Watford. Florian Lejeune, who is recovering from a knee injury, remains a long-term absentee.

Watford midfielder Nathaniel Chalobah is set to return from a knee problem. But forward Troy Deeney remains a doubt with a hamstring injury, while Sebastian Prodl, Daryl Janmaat and Tom Cleverley are all definitely out.

Aaron Lennon returns after missing Burnley’s last game through illness. Midfielder Jack Cork faces a late fitness test after being forced off against Chelsea with an ankle injury.

The biggest fixture on in the EPL pits Arsenal at home to Liverpool. Arsenal look a different side under new manager Unai Emery and have won 12 of their last 13 matches in all competitions. However, how far the side has gone since their loses to Chelsea and man City at the start of the season will be determined against a Liverpool side that sits joint top of the league standings on saturday evening.

Arsenal will monitor right-back Hector Bellerin, who was forced off last weekend because of a muscle problem. Matteo Guendouzi is suspended, while Nacho Monreal and Sead Kolasinac are nearing returns from hamstring injuries and will be assessed. Sokratis Papastathopoulos, who is nursing an ankle problem, is also a doubt ahead of Saturday’s game.

Liverpool midfielders Jordan Henderson and Naby Keita are again ruled out by hamstring injuries. Mohamed Salah has worn protective strapping in training this week because of an inflamed wrist tendon, but he is fit to play against the Gunners.

Liverpool have netted 17 times in their last five league games against Arsenal, scoring at least three times in each of those encounters. If the Reds score three or more on Saturday it will be the first time in their history they have done so in six consecutive top-flight games against a particular opponent – and the first time it has happened to Arsenal (against any side). Arsenal are winless in six Premier League meetings with Liverpool (D3, L3), their longest such run against them since a 12-game sequence from 1994 to 2000. The only previous managerial meeting between Unai Emery and Jurgen Klopp was the 2016 Europa League final, in which Emery’s Sevilla beat Liverpool 3-1.

Wolves boss Nuno Espirito Santo says winger Diogo Jota will not be available for Saturday’s game. The Molineux side named the same starting line-up for their first nine league games this term before bringing in Adama Traore for Jota last weekend.

Tottenham’s Eric Dier and Victor Wanyama have been ruled out through injury and are not expected to return until after the international break. Spurs remain without defenders Danny Rose and Jan Vertonghen.

Tottenham have lost just four times in 26 matches against Wolves, winning 16 and drawing six. Wolves were the last newly-promoted side to win both league games against Spurs in a single season, doing so in 2009-10. Tottenham have won four of their last six top-flight games at Molineux (D1, L1). 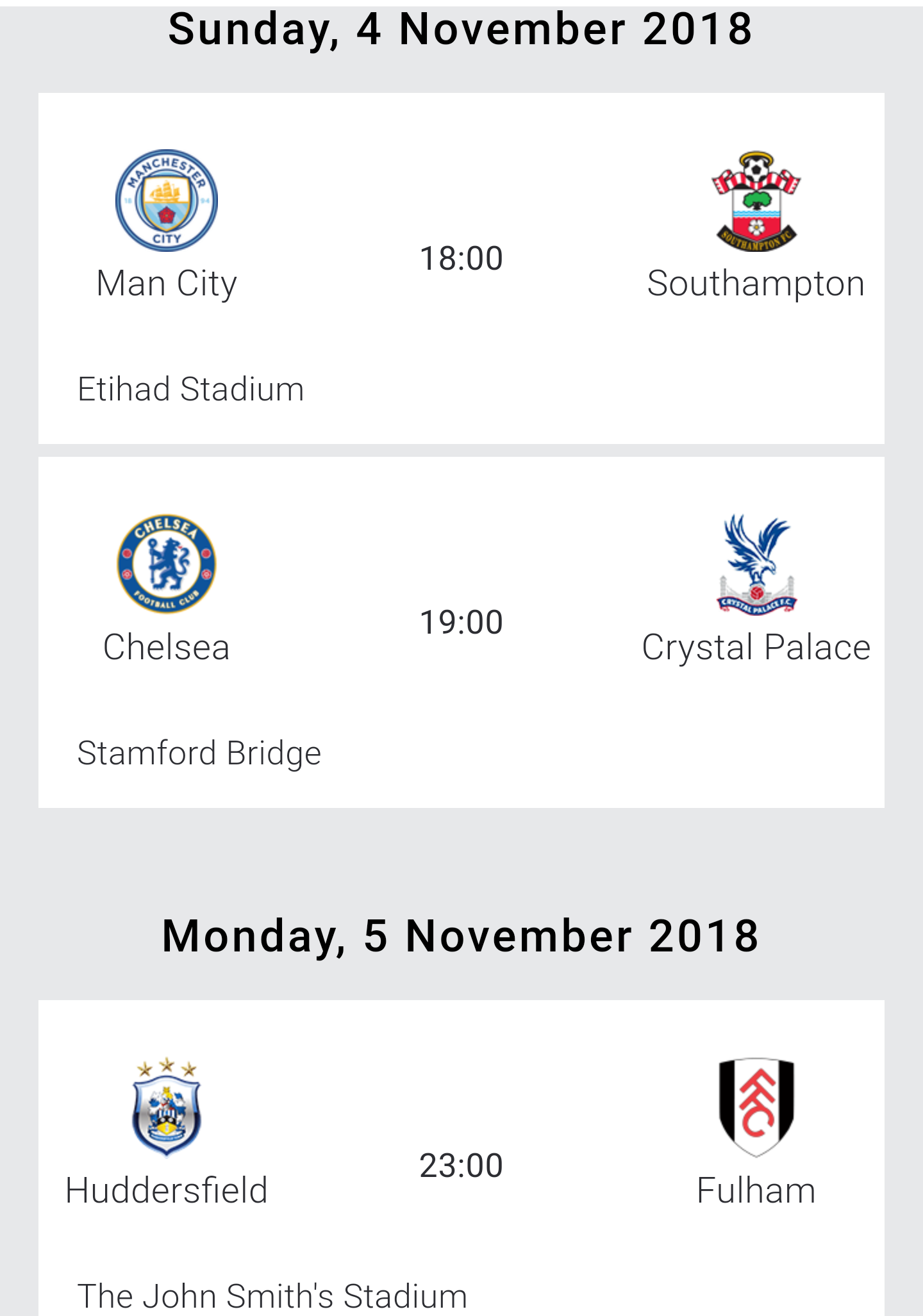 Man City past their latest test winning 1-0 away to spurs and they are still the side to beat 11 games into the season. With a champions League home tie against Shakther coming up mid week, Pep Guardiola will want his side to take care of Southampton as first as they can on Sunday.

Manchester City’s Kevin de Bruyne will be out for five to six weeks with knee ligament damage sustained in Thursday’s Carabao Cup win against Fulham. Ilkay Gundogan has returned to training following a hamstring injury but is a doubt while Nicolas Otamendi is out with a tendon problem.

Southampton have a fully-fit squad to choose from for the trip to the Etihad Stadium. Midfielder Pierre Hojbjerg is available having recovered from a recent illness.

Chelsea will be expected to continue their fine start to the 2018/19 league campaign when they host a Palace side that are fresh from their 2-2 draw at home to Arsenal.

Chelsea’s Eden Hazard is expected to be fit to play some part after recovering from a back injury. Blues midfielder Ross Barkley is set to return having been rested for Wednesday’s Carabao Cup win over Derby County.

Wilfried Zaha missed Crystal Palace’s midweek defeat at Middlesbrough with a shoulder problem but is fit. But Connor Wickham joins Christian Benteke, Scott Dann and Joel Ward on the sidelines due to a thigh strain.

Terence Kongolo is among the players who could return for Huddersfield. David Wagner has said it looks as if the only man in his squad not in contention for Monday’s contest is midfielder Danny Williams (knee). Kongolo (hamstring) and Tommy Smith (knee), both missing for the last three games, have been back in training, as have Rajiv van La Parra and Abdelhamid Sabiri after illness.

Fulham midfielder Kevin McDonald is back in contention after he missed the defeat to Manchester City due to suspension after being sent off against Bournemouth last weekend. Defender Joe Bryan remains unavailable because of a hamstring injury.

Bet on all these games at Bunga Bet

JULIUS MUCUNGUZI | Tribute to Kembabazi: WHO WAS KEMBABAZI --of--KEMBABAZI NAGURU?

JULIUS MUCUNGUZI | Tribute to Kembabazi: WHO WAS KEMBABAZI --of--KEMBABAZI NAGURU?