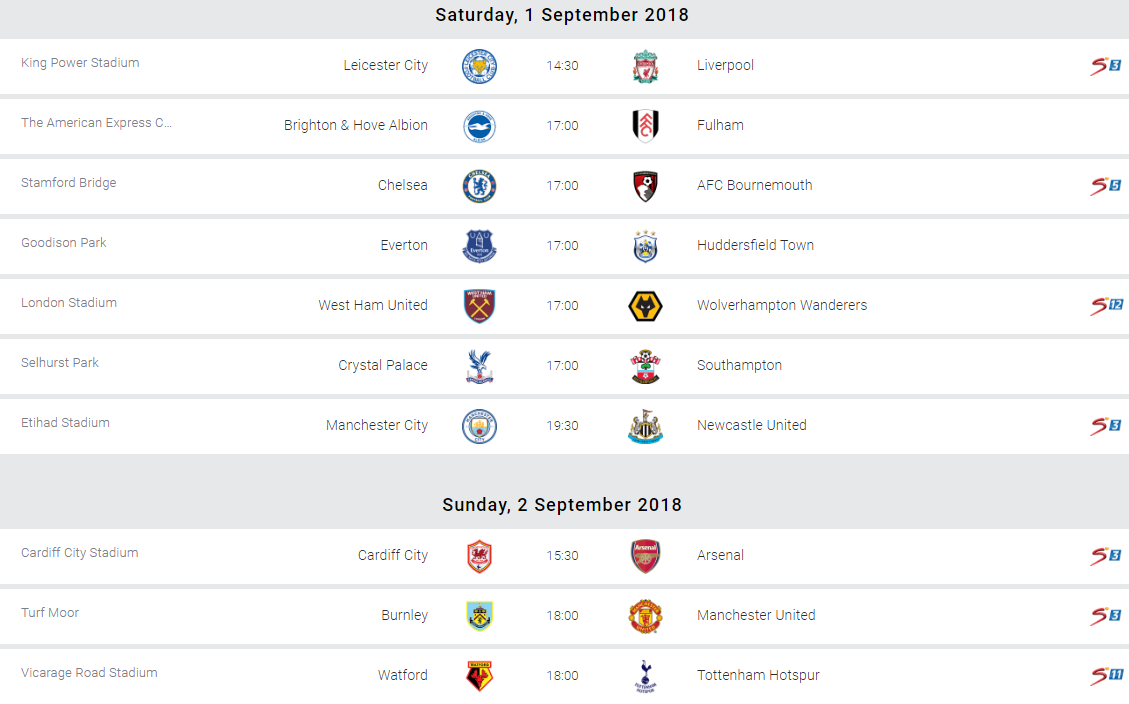 Leicester City will be hoping their fine run that has seen them win both of the last two games will continue when they host a Liverpool side that still hold a 100% record (W3 D0 L0).

The Foxes’ striker Jamie Vardy misses out as he serves the last of his three-match suspension. Summer signing Caglar Soyuncu is still building fitness after injury, while Matty James remains sidelined by an Achilles problem.

Reds defender Dejan Lovren is not yet ready for a first appearance of the season as he continues his rehabilitation from a pelvic problem.  Midfielder Alex Oxlade-Chamberlain is a long-term absentee.

Liverpool ended a run of three straight defeats in all competitions away at Leicester with a 3-2 victory in September 2017.The Reds have won eight of their last 12 league matches against the Foxes.

Brighton and Hove Albion vs Fulham

Two teams with an identical record of winning one and losing two of their opening three league games clash at the American Express stadium on Saturday Afternoon.

Brighton captain Bruno is available after recovering from the ankle injury he suffered against Watford. Lewis Dunk faces a fitness test, while Florin Andone and Jose Izquierdo are definitely out.

Fulham are without Tom Cairney because of a foot injury he sustained in last week’s win over Burnley. Floyd Ayite, Neeskens Kebano and Tim Ream are also absent, but Alfie Mawson could make his first league appearance for the Cottagers.

This is the first top-flight meeting between these sides. Brighton have won their last five matches against Fulham, all of which were in the Championship. There have been only three draws in the 40 league fixtures between them.

Chelsea will be out to maintain their 100% winning start to the league when they host one of the other five unbeaten sides in the Premier League on Saturday.

Chelsea go into the game having won nine of their 12 meetings with Bournemouth, including five of the last six in the Premier League.The away team has triumphed in five of the six previous Premier League fixtures, some thing that should give Bournemouth courage going into Saturday’s fixture

Maurizio Sarri has no new injury concerns and may field the same starting XI which won at Newcastle last weekend. Willian may return but Cesc Fabregas remains out with a knee injury.

Bournemouth’s club record signing Jefferson Lerma could make his Premier League debut for Bournemouth, and Adam Smith returns from suspension. Lys Mousset is sidelined with an ankle injury, while Marc Pugh is also a doubt with a calf problem.

Palace and Southampton have both endured a frustrating start to the start of the season with only a single win between them. The win was Palace’s 2-0 win on opening day at Fulham.

The home side will have Aaron Wan-Bissaka available for, having returned from a one-match ban in the League Cup win over Swansea on Tuesday. Central defender James Tomkins is set to be fit after two games out with a knee injury, while full-back Pape Souare is also back in contention.

Southampton striker Danny Ings faces a fitness test after training this week with a bad blister.  Pierre-Emile Hojbjerg returns after serving a suspension in midweek.

Crystal Palace have triumphed in three of the last six Premier League meetings, having failed to win any of the first 12. The Eagles could secure consecutive top-flight victories in this fixture for the first time since 1991. However, Southampton have won four of their last six away league games against Palace, losing two.

Everton have a host of injury concerns, with captain Phil Jagielka and midfielders Idrissa Gueye and Bernard all ruled out.Top scorer Richarlison has two games remaining of a three-match ban, meaning Ademola Lookman is in contention for a first start of the season.

Huddersfield midfielder Jonathan Hogg is also suspended following a red card in the draw with Cardiff last weekend. Goalkeeper Ben Hamer is sidelined with a knee injury sustained in that match.

Huddersfield’s last win at Goodison Park came in 1937, a 2-1 victory in the First Division. They have lost 12 of the subsequent 14 away games, drawing twice. Everton won 2-0 in both Premier League meetings last season. The Toffees have only lost three of the last 24 encounters home and away, winning 14.

The only team that has lost all its first three games in the league-West Ham will host a Wolves side that is still searching for their first victory despite losing only one fixture.

West Ham forward Marko Arnautovic has recovered from the knee injury he suffered during the defeat at Arsenal last Saturday. Captain Mark Noble is available after a back problem but Andy Carroll, Manuel Lanzini and Winston Reid remain out.

Wolves could be unchanged for the fourth successive league game. Club record signing Adama Traore made his first start in the midweek Carabao Cup win at Sheffield Wednesday, while Ivan Cavaleiro is the only absentee.

This will be their first Premier League meeting since West Ham won 2-0 at Upton Park on New Year’s Day 2011. Wolves also lost at West Ham in an FA Cup tie in January 2016. Their only victory in the past nine visits came in the Premier League in March 2010 (D2, L6).

Man City have no fresh injuries as they bid to recover from a disappointing 1-1 at Wolves last time out. Kevin De Bryne, Danilo, Claudio Bravo and Eliaquim Mangala all remain out.

Man City are unbeaten in their last 21 top-flight games against Newcastle (W18 D3). It is their longest ever unbeaten run against a specific top-flight opponent, as well as being Newcastle’s longest such winless run. Newcastle have lost each of their last nine away league matches at the Etihad, conceding 32 goals and scoring just six in reply. Man City have won their last nine Premier League home games against Newcastle – only against Wolves (10 between 1900 and 1937) have they had a longer winning run in the top-flight. Manchester City have won all seven of their Premier League matches in September under Pep Guardiola, scoring 26 goals and conceding just twice; Guardiola has not lost a match in all competitions as a manager in September since September 2010 (Barcelona 0-2 Hercules) and is unbeaten in 41 games since (W35 D6).

Arsenal registered their first victory of the season thanks to a 3-1 win over West Ham last weekend. They travel to Wales to take on a Cardiff side that has found life not easy to endure on their return to the top flight, managing just two points out of a possible nine.

Mesut Ozil who missed the win at home to West Ham will return for the Gunners after overcoming illness. Elsewhere, captain Laurent Koscielny, Sead Kolasinac, Ainsley Maitland-Niles and Carl Jenkinson are missing, as Lucas Torreira pushes for his first start.

For Cardiff, they have injury problems of them selves. Nathaniel Mendez-Laing has been ruled out for three months after damaging knee ligaments and Junior Hoilett faces a fitness test on a groin injury that has sidelined him for two weeks. Aron Gunnarsson will not return until after the international break because of a knee injury that has ended his hopes of linking up with Iceland following the Arsenal game.

Cardiff are winless in their last 13 games against Arsenal in all competitions (D5 L8), since a 3-2 away win in February 1961. Arsenal won both previous Premier League meetings with Cardiff back in 2013-14, including a 3-0 triumph at the Cardiff City Stadium. Four of Arsenal’s five Premier League goals against Cardiff have come in the final five minutes of games.

Manchester United are hoping to avoid their worst start to a season since 1987 when they visit Burnley on Sunday.  Mourinho’s side have lost two of their opening three league fixtures and nothing but three points away to Burnely on Sunday will see them endure their worst start since the first full season of legendary manager, Sir Alex Ferguson’s reign.

Eric Bailly may return to the Manchester United squad following Phil Jones’ injury during Monday’s defeat to Spurs, while Alexis Sanchez may be fit enough for a start. Diego Dalot and Sergio Romero remain sidelined.

Burnley are set to be without Johann Berg Gudmundsson again.  Dyche made seven changes to his starting line-up for that match and Chris Wood, Jack Cork, James Tarkowski and Joe Hart are among the players poised to come back in. Ben Gibson is available again after being suspended for the European match.

Burnley have won just one of their last 17 top-flight meetings with Manchester United (D8 L8), with that victory coming in their first ever Premier League meeting back in August 2009 (1-0). Manchester United have kept a clean sheet on nine of their last 10 visits to Turf Moor in all competitions, with the exception being a 0-1 defeat in August 2009.

Hugo Lloris will not feature for Tottenham on Sunday as they travel to Watford, with the goalkeeper suffering a thigh injury. He will be joined on the sidelines by Moussa Dembele (hamstring) while Erik Lamela (hamstring) will be assessed and Victor Wanyama (knee) is back in full training. Son Heung-min is still away on international duty with South Korea at the Asian Games.

Watford have a nearly fully fit squad to choose from, with on Tom Cleverley (Achilles) missing through injury. Nathaniel Chalobah limped off with cramp in midweek, but is set to be available while Miguel Britos has shaken off a knock.

Watford are winless in their last 13 meetings with Tottenham in all competitions (D3 L10) since a 3-2 win at White Hart Lane in a League Cup tie in October 1994. Tottenham are unbeaten in 12 league meetings with Watford (W8 D4) since a 0-1 loss at Vicarage Road in May 1987. Watford are looking to win their first four league matches of a season for only the second time in their entire history, also doing so in the 1988-89 campaign when they were in the second tier.