Ankole Kingdom is a farce, created by colonialists

I hope that most of you who have been debating the issue of restoring Ankole monarchy know the difference between Nkore and Ankole. Let me explain. Nkore refers to the small pre-colonial kingdom that included present Mbarara and Kiruhura districts and Isingiro North constituency.

Present day Ntungamo, Greater Bushenyi and Ruhinda districts were part of Mpororo Bashambo chiefdoms. present Buhweju and Ibanda districts were different Kingdoms under Barisa and Babito dynasties respectively. Bunyaruguru was independent and Bukanga was under Koki.

These otherwise Independent chiefdoms and Kingdoms were forcefully amalgamated to Nkore by the British to form Ankole kingdom in the 1901 Ankole agreement. Kajara by the way was not part of this Agreement. The chiefdom of Beene Kihondwa of kajara had not yet been fully subdued by the British.

These kingdoms were independent of Nkore complete with their royal drums–the then symbol of power. Theses royal drums are now kept in the Uganda museum together with that of Nkore kingdom. The  last king of Igara called Musinga commited suicide to avoid the humiliation of being forcely subordinated to that of Nkore in 1901. The one of Buhweju a one Ndagra resisted British occupation and  was killed together with his son and his drum taken to Kamukuzi.

This shows that Ankole is a British creation. It is not precolonial. It therefore has no historical and traditional legitimacy in the eyes or hearts of all Banyankore–i.e the people of Ankole (not Nkore) whom the British “created” in 1901. Note that the name Ankole was a corruption of Nkore the small kingdom which is the nucleus upon which the bigger Ankole was created. just like Uganda is a corruption of Buganda. 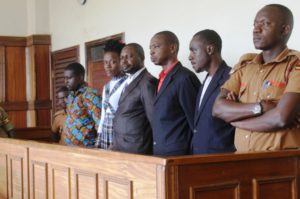