KAMPALA – The head of the Anti-Corruption Unit at State House Col. Edith Nakalema has confirmed a major investigation into the affairs of Bank of Uganda is underway and revealed that Governor Emmanuel Tumusiime Mutebile blew the whistle.

In a statement, issued Friday June 14, Col. Nakalema also indicated that the investigation initiated by her team was looking into the conduct of a number of senior Central bank officials and those in the customs and Civil Aviation Authority (CAA) in relation to discrepancies in printing and transportation of some billions of Uganda shilling bills. 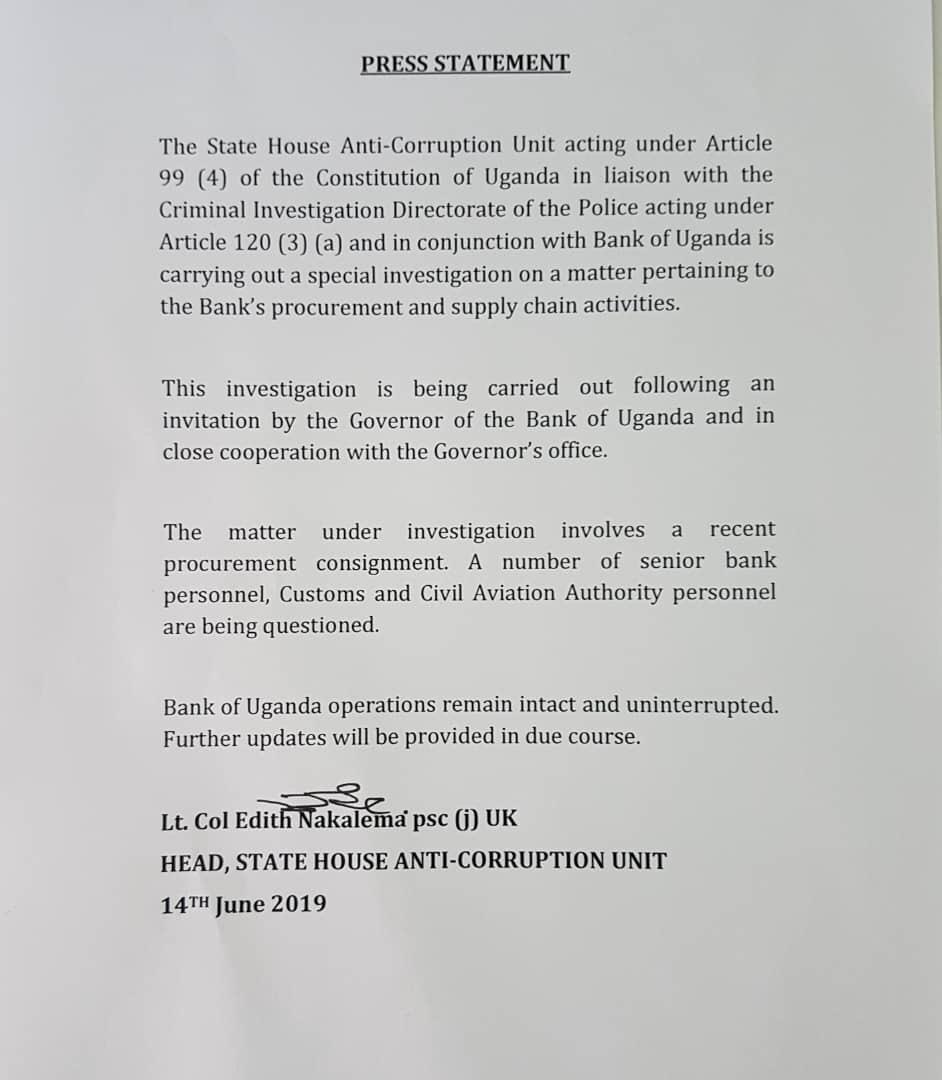 More than a dozen plainclothed officers descended on the Bank of Uganda Thursday, arresting officials in “conjunction with the Governor’s office”.

The arrests were made on an invitation of Central bank governor Tumusiime Mutebile after reports that officials headed by Dr. Barenzi, the deputy director who represented Charles Malinga Akol, BoU’s Executive Director Operations had allegedly ordered for printing of over UGX 90 billion in excesses ‘without his knowledge’.

Collaborating on the same, government spokesperson Ofwono Opondo said the BoU officials were being questioned on suspicion of “criminal mismanagement” and money laundering.

He has said the timing of the operation was deliberately co-ordinated with the arrests on aninvtaitaion by the governor “to avoid any possible collusion” between suspects and because a large number of those involved in the scum were present at the bank.

Mr. Opondo said the president after learning about the gravity of the matter authorised Col. Nakalema to raid the bank and bring the culprits to book.

Mr. Opondo said that investigations show that there is no excess money was printed by BoU and brought into the country contrary to reports. He said the people who are under investigation are eight and more people will be questioned.

The investigation, according to reliable information obtained by this website in the last two days is being led by the Police Criminal Investigations Director Grace Akullo, who led a team of investigators that held a long day meeting at the Central Bank on Wednesday.

Ms Akullo has apparently been nominated to lead the investigation by the State House Anti-corruption Unit, led by Col. Edith Nakalema, and has enlisted the support of the Police Special Investigations Unit, now led by veteran detective Elly Womanya.

Sources told us that five top officials at Bank of Uganda are in trouble, and were subject of deliberations in the Wednesday meeting.

Bank of Uganda officials according to reports left the country to German where Uganda prints its cash aboard a chartered airplane to ferry the printed cash to Uganda.

However, upon arrival, this website has learnt, the delegation headed by Dr. Barenzi, the deputy director who represented Charles Malinga Akol, BoU’s Executive Director Operations who was on leave allegedly ordered for printing of over UGX 90 billion in excesses ‘without knowledge of their Bosses.’

Sources close to the controversial development say, some of the said UGX90 billion was used for purchasing goods which were as well loaded into the chartered plane.

Sources say at Entebbe International Airport the delegation was received by another team from BoU and the security team but two officials allegedly snubbed security and ferried the cash into their private vehicles that never reached central bank.

Industry commentators say Bank of Uganda officials have had a habit of printing money off the official approved figures and that investigators believe this has been going on for a while since its believe that top cream of Bank of Uganda is involved in the scheme.

Operation specs to arrest those involved are still keep a top secret, only security directors involved in this operation are aware of who next to arrest, it is believed that the president gave a green light to this huge operation.

This website has learnt that five top officials of the bank of Uganda are being held at CMI headquarters and 60billion shillings balance has been impounded as evidence.

Another area of interest for the investigators is said to be the Shs478 billion that BoU claims to have used during the receivership of Crane Bank.

They are believed to have connived to dupe some of the banks of their money. For instance, some banks like a cooperative bank, Greenland Bank and International Credit Bank had their assets sold at over 90 percent discount even though some had valid documentation like land titles.
It is also believed that BoU officials took part of the Shs478 billion supposedly injected in Crane Bank Limited (CBL) while in receivership as liquidity support. Yet the Auditor General John Muwanga while auditing the expenditure of the money found that Shs320 billion of the funds could not be accounted for.