MUNYONYO —President Yoweri Museveni on Saturday graced the wedding ceremony of Isaac Kutesa and Yvette Kamurasi, at Munyonyo Peace Hub in Kampala during a church session where the newlywed couple tied the knot.

The bridegroom Isaac is a son to Mr Sam Kutesa, the Minister of Foreign Affairs, and late Jennifer Kutesa, while the bride Yvette is a daughter to Mr. and Mrs. Yona and Penninah Kamurasi of Mugore village, Rushere in Kiruhura district.

The Deputy Speaker of Parliament Jacob Oulanyah, government officials, diplomatic dignitaries among other graced the occasion.

Mr Museveni congratulated Mr Kutesa for raising and nurturing his children responsibly, saying that it’s not easy for parents to see their children reach this stage. He also thanked Isaac, the bridegroom for perseverance and reaching this stage of marriage in life.

He further thanked God for protecting their families. “During the bush war these families faced too many problems. They politically faced it. As the children were growing, there followed the untimely demise of their mother Jennifer Kutesa. The good Lord really sympathised with these families because he put them on the right side during the political turmoil,” he said.

The President cautioned young people especially the youths to value marriage and be careful and serious while choosing partners. 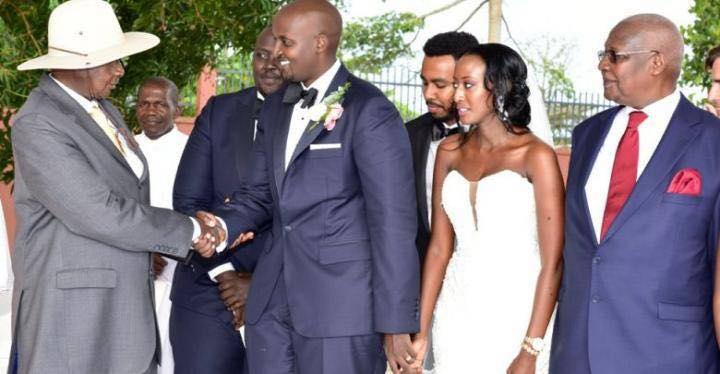 He urged them to plan well for successful marriages in terms of life and wealth.

Mr Kutesa thanked the congregation for turning up to witness their children wedding vows saying it’s a blessing to the family. He thanked Mr Museveni for sparing his time to grace the occasion.

Preaching to the congregation, the retired Bishop of North Ankole Diocese John Muhanguzi while addressing the congregation said that there’s no one who is an expert in marriage experience.

“Tolerance and forgiveness are the keys to a successful marriage. Marriage is an institution of God and a blessing that sustains human society and where God does not make a mistake.

And when Jesus steps in marriage, there can never be a disruption,” he said.