The course was conducted and facilitated by the Joint Special Operations University from the United States of America (USA).

While presiding over the training as chief guest, the Deputy Chief of Staff URDCC Col Paul Eswapu congratulated the participants upon completion of the seminar.

He said that Civil Military Cooperation (CIMIC) is a reality, that is why its applied everywhere in natural calamities like floods, famine and in war.

“The relationship between the military and the local population must exist” Col. Eswapu emphasised.

He thanked the USA government for building CIMIC Capacity and that these skills and capabilities are very important because they remain relevant to the people to be able to handle some of the calamities like Ebola in Africa.

“CIMIC is recognized to be playing a big role in UPDF and that’s why human terrain is key terrain in military operations”. He added.

He further said that, military operations have now changed, the enemy is now everywhere, even in the population, so without applying CIMIC, one will be wasting time. He tasked participants to go and disseminate the good skills to their fellow officers and soldiers who did not get the opportunity to attend. 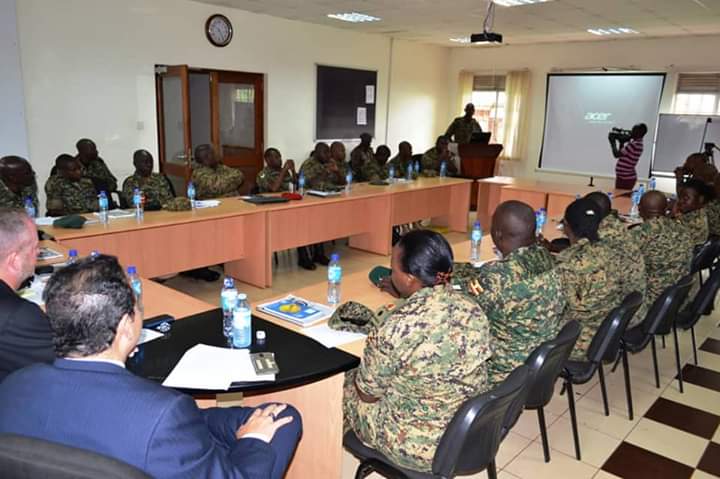 Earlier on, a representative from the US Embassy Maj Micheal Miller said that he was humbled by the hospitality UPDF has extended to the facilitators.

“This portrays the good diplomatic relations between Uganda and USA. The US government will continue to support UPDF by facilitating more CIMIC courses because CIMIC helps every soldier to have a special mandate” Miller said.

He appreciated the good work that the UPDF is doing in Somalia especially in public relations which he attributed to CIMIC.

He observed that it’s not only UPDF that is benefiting from these CIMIC courses but the world at large.

The course closure ceremony was attended by the Deputy Chief CIMIC UPDF Col Nelson Aheebwa, head of the facilitating team from the Joint Special Operations University in USA Mr Ken Lavoy and representatives of commandants from other training schools in Jinja.