NAKASEKE – President Julius Maada Bio of Sierra Leone, who is on a 3-day visit to Uganda at the invitation of President Museveni, has expressed delight to have been able to visit the country to share in the experiences of the country.

He remarked that his visit has enabled him to confirm that Uganda is an economically progressing country.

The President made the remarks today during his tour of Namunkerera Agro-Processing Industries Limited Service Centre in the Central Region’s Nakaseke District where he witnessed an assortment of locally manufactured products such as vegetables, legumes, organic seed and compound fertilizers.

Accompanied by by Agriculture, Animal Industry and Fisheries Minister, Vincent Ssempijja and State Minister for Works, Gen. Katumba Wamala, the Sierra Leone leader was conducted was taken on a guided tour of the complex by Gen. Salim Saleh who is Chief Coordinator of Operation Wealth Creation (OWC). Gen. Salim Saleh.

He observed that He noted that Uganda is a democratic state has displayed determination to progress adding that Sierra Leone should borrow a leaf from Uganda to be on the road to develop with a view to catching with the rest of the world. 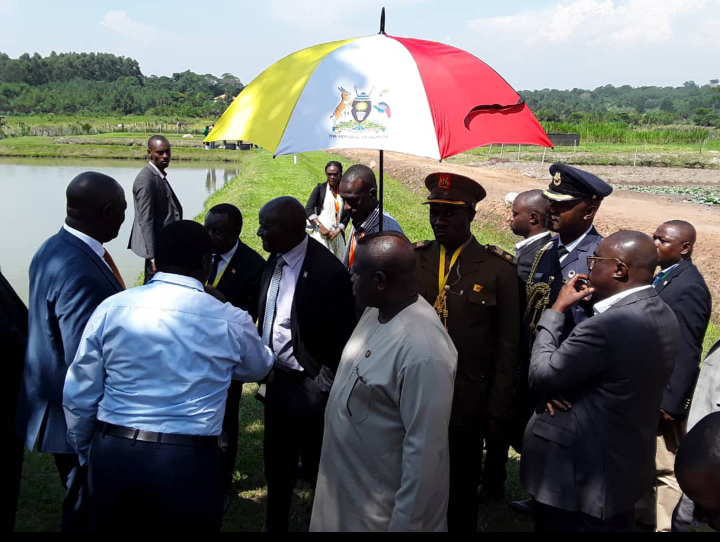 “My visit to Uganda is a step ahead and motivation to put to reality in Sierra Leone so that Sierra Leone becomes an agricultural country for a politician is one who does what he says,” he remarked. .

“I am looking forward to progressive leadership in Africa because as the continent shares similar challenges, I have travelled a lot to pick the best examples in services sectors, more especially in human capital, as first target for development and agriculture to ensure food security and productivity,” added.

Minister Sempijja noted that Uganda and Sierra Leone have a lot to share in common adding that African countries should strive to import more from each other. He stressed that Uganda has laid emphasis on commercialised agriculture to benefit wanabchi.

Gen. Saleh reported that Uganda ahs made positive strides in agricultural mechanization and industrialization adding that the Nakaseke project started 14 years ago.