KAMPALA- The Uganda Revenue Authority (URA) has on Monday, July 15 broken down the URA annual revenue performance in a press brief for the just concluded financial year 2018/19 under the theme ‘Transparency and Accountability for Effective Service Delivery’ at the URA main boardroom.

According to URA, the press brief is expected to bring to the taxpayers’ attention the factors that explained last years’ good revenue collection performance, the administrative and policy interventions executed during the year.

It should be noted that during the fiscal year 2018/19 was given a net revenue target of UGX 16.36trillion.

The URA Commissioner General, Doris Akol revealed that the net revenue collections for FY 2018/19 were UGX 16.62trillion, registering a growth rate of 14.95% (UGX 2.16trillion) compared to last financial year which was UGX 258.89 billion above the target, posting a performance level of 101.58%.

The Commissioner General revealed that net revenue has consistently changed from FY 2014/15 to FY 2018/19 at an average rate of 15.72% over the five year period.

According to URA, the major import items that registered an increase in tax yield during the FY 2018/19 compared to last year include; worn clothing (UGX 42.25 billion), cigarettes (UGX 29.27 billion), motor vehicles (UGX 28.36 billion), Footwear (UGX 27.00 billion) among others.

Ms. Akol said that the public sector performed at 127.96% of the target which boosted the overall PAYE tax head performance which was really healthy in FY 2018/19.

During the FY 2018/19, the demand for private sector credit increased to 12% from 6.8% in FY 2017/18 which increased the level of economic activities as reflected in their GDP growth rates and hence increase in revenue collected and leading to the surplus according to Ms. Akol.

The net international trade tax collections during the FY 2018/19 were UGX 6,875.41 billion registering a performance of 100% and UGX 0.34 billion above the target.

Ms. Akol said that FY 2018/19 was particularly the 3rd year of the implementation of the URA Corporate Plan 2016/17-2019/20 which is premised on 3 major pillars of cultivating a taxpaying culture through the provision of reliable services, leadership development and building strategic partnerships.

“In order to expand the tax base, URA together with local governments, Kampala Capital City Authority and Uganda Registration Services Bureau implemented the Taxpayer Registration Expansion Project to penetrate the informal sector that accounts for 48% of the economy,” she said. 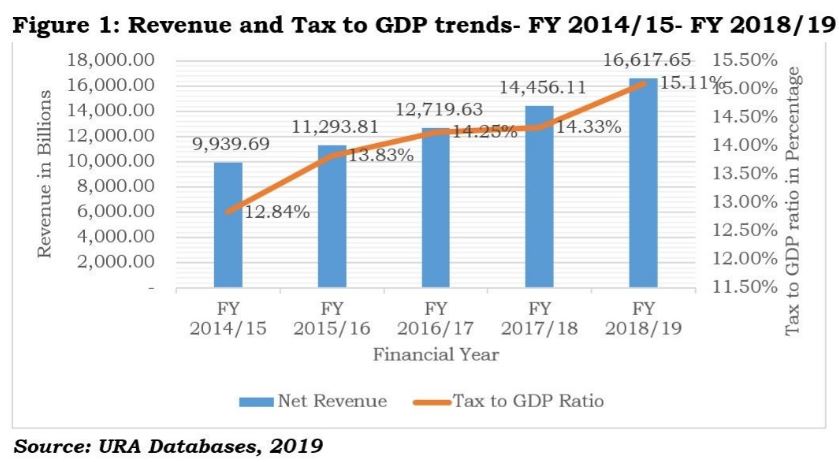 She further noted that several initiatives aimed at educating taxpayers on their tax obligations through customized and tailored tax education initiative were implemented.

The Commissioner-General said, “URA implemented the Block Management System in greater Kampala which helped to map out taxpayers in Blocks and the unregistered taxpayer is brought onto the tax register.”

URA said that over 42 tax societies in universities and schools were held and regional budget breakfast all over the country among others.

“Because of the above initiatives, Ugandans have voluntarily registered for taxes and a total of 166,663 new taxpayers have been added onto the URA tax register,”Ms. Akol remarked.

Ms. Akol has applauded Ugandans for paying taxes saying, “We specifically appreciate all taxpayers and partners that have supported us on this journey and we managed to collect more revenue for government last year.”