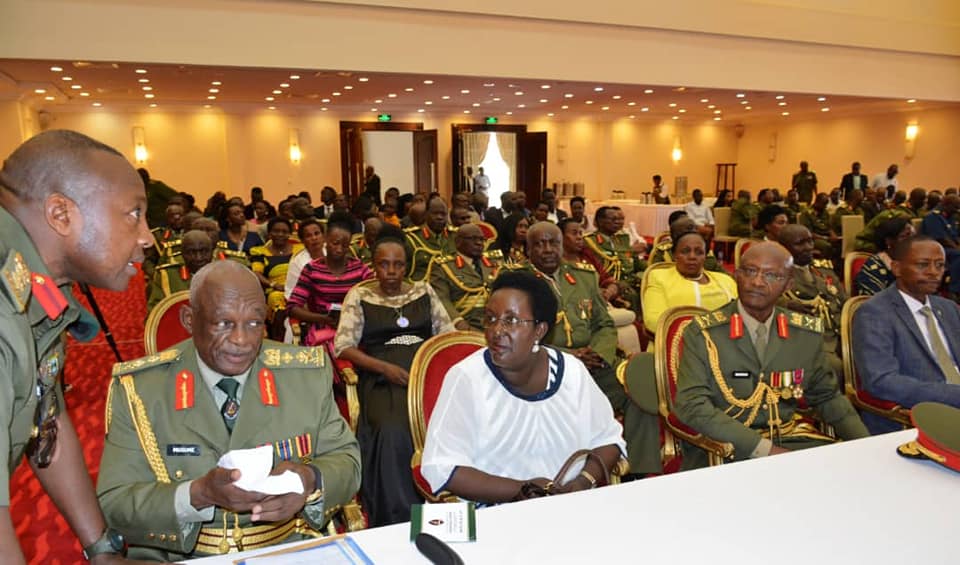 ENTEBBE – President Yoweri Museveni and Commander-in-Chief of Uganda Armed Forces has advised the Uganda People’s Defence Forces (UPDF) retirees to invest their retirement package wisely and create a base for themselves in civilian life.

The President was on Monday evening speaking at a farewell party he hosted at State House, Entebbe for 19 retiring UPDF Generals who have served the country for a period of between 30 to 45 years.

The colorful ceremony that was graceful with music played by the UPDF Band, President Museveni handed over certificates of recognition and field sticks among others to the Generals who were escorted by their families and thanked them for the years of serving and liberating Uganda. He also hosted them and their families to a dinner.

“I remember Joram Mugume when attacking Kabamba in 1983. When we had no food, he linked us with his uncle who gave us a cow that helped us for a few days,” he recalled.

He commended the Generals for having served and sacrificed for their country right from the beginning when they were being paid little or no salary. He noted that this was the reason why the Army has been able to grow on a very healthy foundation and why there is peace and rapid economy growth in the country.

“If we first insisted on a good pay, the country would have no Army. Because we were able to provide security for our country, business has boomed. You now find people dying of rich-men diseases like gout. If countries like Somalia can also first start by having a volunteer army, they can be able to save their country,” he observed.

The President advised the retirees to go back to their villages and teach people how to make money through farming as opposed to producing for their stomachs.

He also urged them to teach wananchi the need for regional integration saying that it was the only way that Africa would prosper and have an advantage as a big bloc.

“Things are moving very well in East Africa because they have agreed to create a confederation. If Africa does not establish a center of gravity for itself, it can be in very big trouble,” he said.

The Chief of the Defence Forces, Gen, David Muhoozi advised the retirees to find something worthwhile to do with their time.

“You retire from active service but you must also retain the image,” he said.

He disclosed that there would be a regional command that would keep in touch with the retirees to check on their well-being. He noted that the UPDF had been enabled to standardize and give a befitting send off to its retirees because because of the peaceful country and the economic growth.

On behalf of the retirees, Gen. Joram Mugume, expressed happiness that as they retired, the Army had achieved the original mission of keeping peace. He thanked the UPDF for being a disciplined Army and urged those still serving to keep focused on the country’s historical mission.

“I have memories of 1970 Cadet Course in Munduli, Tanzania and how tough it was. We returned to a hostile environment which later culminated into the 1986 guerilla war which I was part of,” he said.

He thanked other retirees for having worked tirelessly for the liberation of Uganda.

I had no idea! Museveni surprised private institutions are paying taxes