KASESE – Ministry of Health has Wednesday, June 12, 2019, confirmed three more cases of Ebola, all relatives to five-year-old who was first diagnosed with the disease on Tuesday.

The five-year-old boy has since succumbed to Ebola, both health ministry and World Health Organization (WHO) of the United Nations (UN) have confirmed.

Ministry officials and partners are in Bwera, Kasese to assess the situation.

The death is the first in Uganda, amid a deadly outbreak in neighbouring Democratic Republic of Congo.

More than 2,000 cases have been recorded in DRC in the last 10 months – most of which have been fatal.

WHO director-general, Tedros Adhanom Ghebreyesus, on Tuesday said that he will convene an advisory body — called an emergency committee — as quickly as possible to review the situation and decide whether the outbreak now poses a global health threat.

Mr. Ghebreyesus said Uganda and partners have been working for months to protect the border area against just this type of event.

“It’s never good news to have Ebola,” he said but suggested the preparatory work should help contain the threat.

The infected child crossed into Uganda with his family in Bwera, near the Congolese city of Butembo. The Congolese Health Ministry told WHO that the family was traveling from Mabalako. Both Mabalako and Butembo have experienced intense Ebola transmission of late, Minister Aceng told the media on Tuesday. 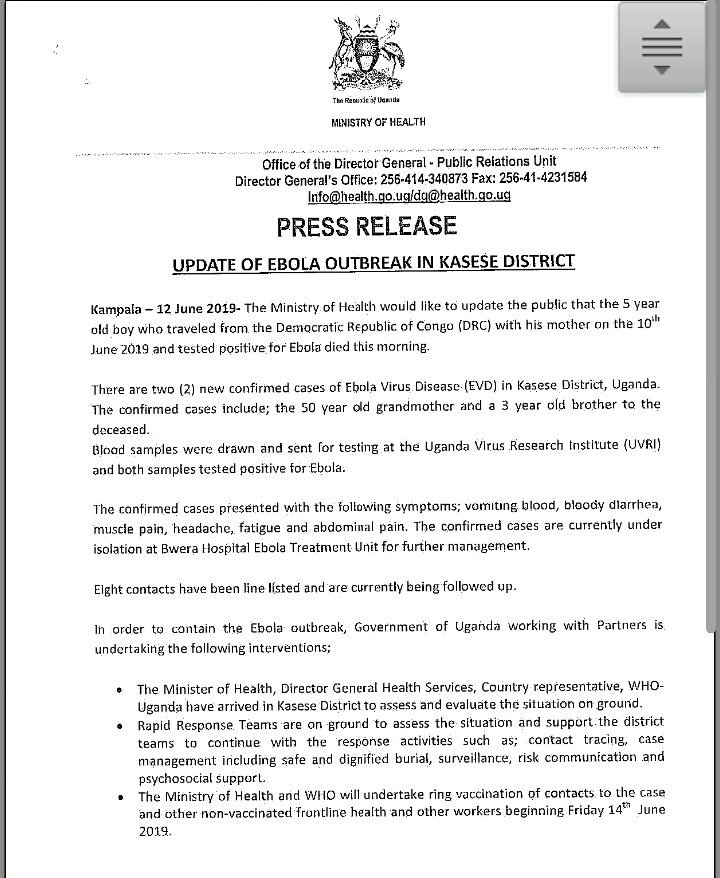 This website independently verified that the boy’s mother is Congolese but his father is Ugandan; they live in Uganda, near the border. The family had traveled to DRC to see the woman’s father.

He died from Ebola in late May.

A group of 14 family members set off to return to Uganda, arriving at a village called Kasindi near the border on June 10. Of the group, seven are children, ranging in age from 7 months to 12 years of age.

When they arrived at Kasindi, 12 members of the group were experiencing symptoms, and they stopped there at a health facility. They were directed to an isolation center, but then six members of the family fled the facility, crossing into Uganda, said the Congolese Health Ministry, which alerted Ugandan authorities of the family’s movements. The group that crossed the border included the boy, his mother, and four others.

The WHO’s country office for Uganda said that after crossing the border, the group sought care at a hospital in Kagando, where health workers recognized the boy was likely infected with Ebola.

The boy was transferred to an Ebola treatment center at Bwera, one of the facilities Uganda has set up in anticipation of the possibility of seeing cases imported from DRC. He was tested for the virus there.

For months, Uganda has been preparing for the possibility that a case arising from the outbreak in DRC could spill into their territories, with Uganda, South Sudan, and Rwanda vaccinating health workers in health facilities near their borders with DRC. 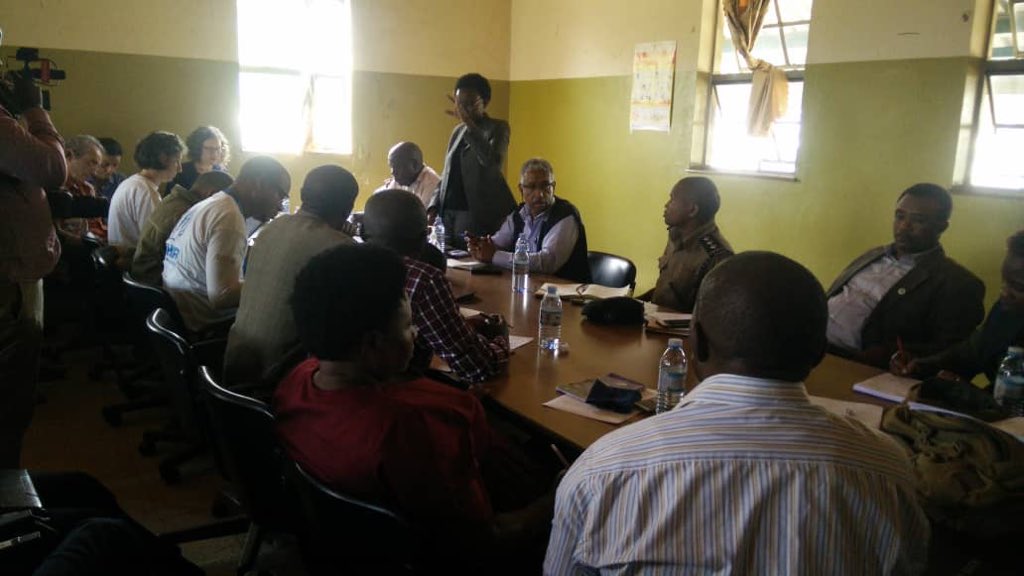 Uganda has vaccinated nearly 5,000 health workers at 165 health facilities, including both the one where the boy is being treated and the one at Kagando where his family first stopped for care.

It progresses to vomiting, diarrhoea and both internal and external bleeding.

People are infected when they have direct contact through broken skin, or the mouth and nose, with the blood, vomit, faeces or bodily fluids of someone with Ebola.

Patients tend to die from dehydration and multiple organ failure.