KAMPALA – The Minister of Defence and Veterans affairs Hon Adolf Mwesige has said that the government of Uganda will continue to support training in the UPDF as a continuous means to achieving professionalization of the forces. He said UPDF is a professional force and training must be one way of maintaining that status.

Hon. Mwesige said that this course is a clear reflection that East Africa Community integration is a success since it has drawn students from the entire East African Region and South Africa.

On behalf of HE the President and Commander in Chief of the UPDF, Hon Mwesige applauded the UPDF as an institution for the tireless efforts to maintain peace in Uganda and the entire region.

He also thanked partners like the US, UK, China, India, Egypt and others for supporting the UPDF in the form of training and equipment.

He acknowledged the contribution from Makerere University faculty of social sciences for partnering with the college to offer an affiliated Masters Degree program at the college.

He also thanked everyone in attendance for sparing time for the function and congratulated the graduands upon successfully completing the course. “I know it was not easy through this one year at the course, thank you for your endurance and congratulations to you all” he concluded.

The Chief of Defence Forces(CDF) Gen David Muhoozi said that training is improving human resource and is at the core of capacity building and professionalism in UPDF.

Gen Muhoozi further said that UPDF has now improved training by standardising the way it teaches in conformity with other colleges in the region.”We have strived to improve training by empowering the teaching staff with other foreign partners like India, Tanzania and Kenya,” he said.

The Commandant of the college Lt Gen Andrew Guti while welcoming guests informed the chief guest and the gathering that, this was intake 14 of 2018/19 with all 42 students successfully completing and ready for graduation. He said the students were drawn from all East African Community partner states as well as the Republic of South Africa.

He appreciated the support from UPDF leadership that enabled the smooth running of the course hence its success. 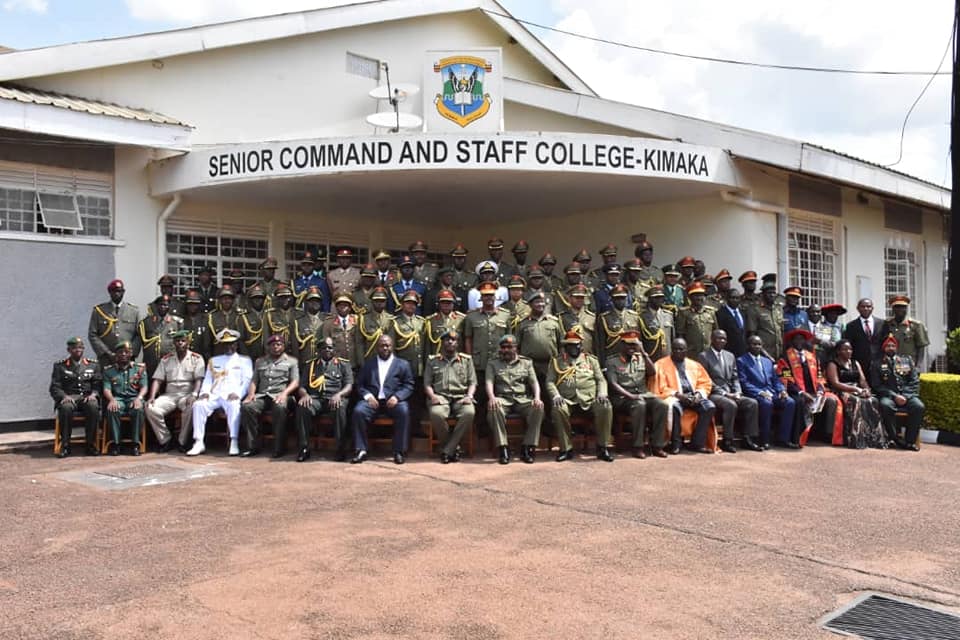