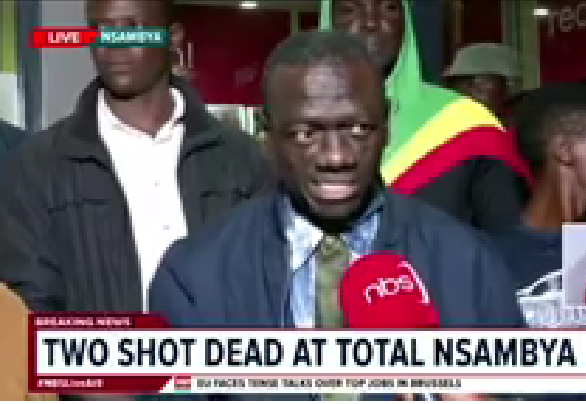 NSAMBYA – Two armed robbers have been shot dead in a fire exchange with police at a fuel station owned by Dr Kizza Besigye in Nsambya, a Kampala suburb.

According to witnesses, the police engaged the thugs following an intelligence tip off that they were planning to rob an unspecified amount of money at the fuel station.

When this reporter arrived at the fuel station, two bodies of the suspects were lying in a pool of blood while police recovered two guns at the scene.

Police have sealed off the police station as further details are gathered about the incident.

This is a developing story and PML Daily will be keep you updated.

The incident is one of the many involving guns in a period of eight months.

Early this month, this website reported that a rising spate of armed robberies involving soldiers has puzzled security agencies, further complicating efforts to stem the crime.

PML Daily has learnt that the men behind this robberies are highly trained and coordinated, which has made it difficult to apprehend them.

Just like the Nansana robbery, the armed thugs were riding motorcycles without number plates.

In a bit recent separate incident, police officers engaged suspected armed robbers in a shootout at the suspects’ residence in Masanafu in Rubaga Division.
Kampala Metropolitan Police spokesman, Superintendent of Police Patrick Onyango, said the gunmen shot and injured one of the police officers. The policeman, who was shot in the leg, was admitted to hospital.

According to police, one of the two suspects, a serving Uganda People’s Defence Forces (UPDF) solidier, escaped. Police recovered two guns belonging to the UPDF and two magazines containing 32 bullets. The guns had UPDF serial numbers.

Sources investigating the matter recently told this website that judging from the manner in which the robberies of Nansana and Zzana were carried, highly trained soldiers have a hand in them.

The police suspect that the soldier, who escaped in the Rubaga incident, is part of the group that has been behind armed robberies in Nansana Municipality in Wakiso District and Rubaga Division in Kampala City.

“The suspect on the run is Richard Kasirye. A big reward awaits any member of the public with information that can lead to his arrest,” said Kampala Metropolitan Police spokesperson Patrick Onyango.

Security agencies also argue that the sophisticated robbers are also able to beat CCTV camera surveillance using masks. In the Nansana robbery, the gunmen had masks. Government has so far spent at least Shs560 billion on installation of CCTV cameras in Kampala and neighbouring areas.

The deployment of  thousands of LDUs around Kampala  and Wakiso has not done much to deter armed criminals.

President Museveni, in September last year, issued a 10-point security strategy which he assured the country would stop or eliminate the criminals.

He said government would instal CCTV cameras, introduce electronic vehicle number plates, give police officers radio calls and drones and deploy 24,000 Local Defence Unit personnel to police Kampala. Since then, 6,000 LDUs have been trained and deployed in the city centre to conduct patrols to check criminals.