City businessman Patrick Bitature has Thursday, May 9, 2019, been re-elected as the Chairman of Umeme Uganda Ltd board.

Mr. Bitature said Umeme has inception invested $627m in the distribution network and that the distribution subsector still needs more money to enable the evacuation of increased generation from Isimba and Karuma dams.

Bitature also revealed that government has summoned Umeme to re-negotiate a long term concession, following an impasse in the recent past.

Much as Umeme still has six years ahead on their contract, Bitature said: “it in both parties’ interest to start negotiating a concession now because we have Karuma Power that is imminent, Isimba is now already switched on and we need to evacuate this Power.”

He said that the government has done its side and that it’s now for the private sector to play its role.

On financial performance, Mr. Baitature told shareholders that the company recovered from the 2017 regulatory write-downs, posting a strong performance for the year. Earnings before Tax depreciation and amortization increasing by 8.9% to UGX354b in 2018 compared to UGX35b in 2017.

During the year, he noted, cash flows generated from operations were 395b compared to 302b in 2017.

In total, “our capital investments implemented in this year were UGX231b.”

This year, he noted that the board has recommended a final dividend of 28.8% per share compared to 7.6 per share in 2017.

He told PML Daily that the final dividend will be paid on or about July 15, 2019.

Speaking to the media shortly after AGM, Umeme Ltd Chief Executive Officer (CEO), Selestino Babungi noted that the customer base has doubled over the last four years with Prepayment metering contributing 24% of the Company revenues.

“We project further growth with the implementation of Electricity Connection policy, that aims to achieve 80% access to clean energy by 2040,” he noted.

According to the annual report, electricity sales increased by 9.1 on account of increased industrial demand, new connections, system stability, and energy losses reduction.

Umeme noted that the growth is consistent with other economic indicators.

He said: “Last year we registered a 9.1% in electricity sales which is consistent with 6.1% GDP growth”.

Babungi noted that Africa is coming here to appreciate what Umeme has been able to achieve.

“We are delivering efficiently. We thank you for the support.” 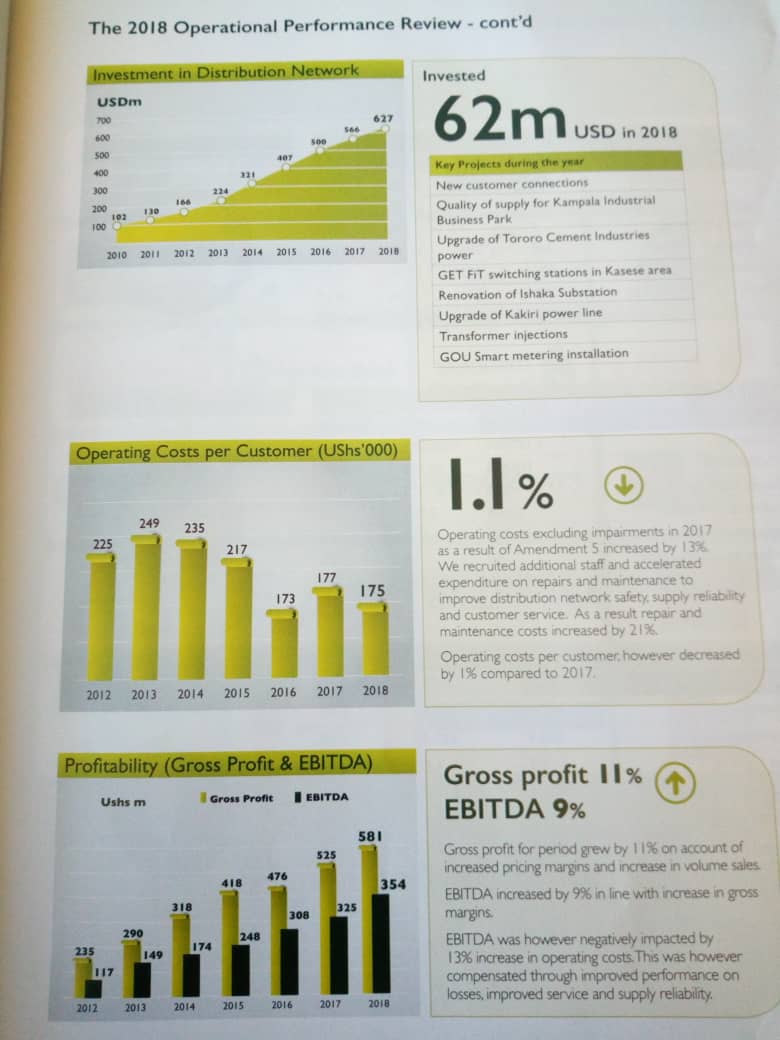 This according to Mr. Babungi, has been achieved through deliberate investment in the distribution network to reduce technical losses and implantation of the commercial losses reduction strategy.

Mr. Babungi said they will use the most appropriate technology to bring down energy losses, sustain a rigorous safety regime and invest in strengthening the network to improve the quality and reliability of supply.