KAMPALA – President Yoweri Museveni has called for patience from nurses and midwives and public servants with assurances that government is committed to the gradual enhancement of the remuneration public servants.

He reminded them that salary increment cannot be done at the expense of the country’s development programmes because it is only having a better national economy that can guarantee the sustainability and progress of any nation.

He made the remarks on Sunday while addressing nurses and midwives at Kyamate Secondary School grounds in Ntungamo Municipality, to mark this year’s International Nurses Day.

The President said it was not wise for the government to spend the biggest proportion of the national revenue on salaries and forget to develop the country’s infrastructure that form the backbone of the national economic development.

Mr. Museveni also used the occasion to advise civil servants to stop clamouring for comparable remuneration of all Civil Servants noting that government had made a decision to give enhanced payment to scientists to save the country from brain drain and called for patience from other Civil Servants assuring them that their payments will be enhanced as the country’s economy improved.

On the shortage of nurses in government hospitals, the President said that there was a shortage of public servants generally because of limited resources to meet their heavy wage bill.  He cited the example of the Uganda Police Force, which by international policing standard of one policeman per 500,000 people, Uganda should be having a force 82,000 members of the police but currently, the country has 43,000 members only.

“Let’s learn to live within our means and do what is affordable as we ensure a minimum amount of growth. It is not wise to consume all that we produce. We shall hurt the economy and the country as a whole,” he advised.

“The economy is growing.  You should not worry. The government will pay you better. Even when you are retired, with a good economy, your pension will be enhanced,” he added.

The President pledged that the government will give lunch allowance to all nurses and midwives in government hospitals as a way of motivating them and enhancing health service delivery.

On a large number of nurses coming out of nursing schools annually, the President welcomed the development noting that at the current population growth, Uganda will have a population of 100 million by 2050 that will require 100,000 nurses. He observed continued enrolment and training was necessary. He, however, called for specialised training of nurses with a focus on the diseases that hurt the population most. 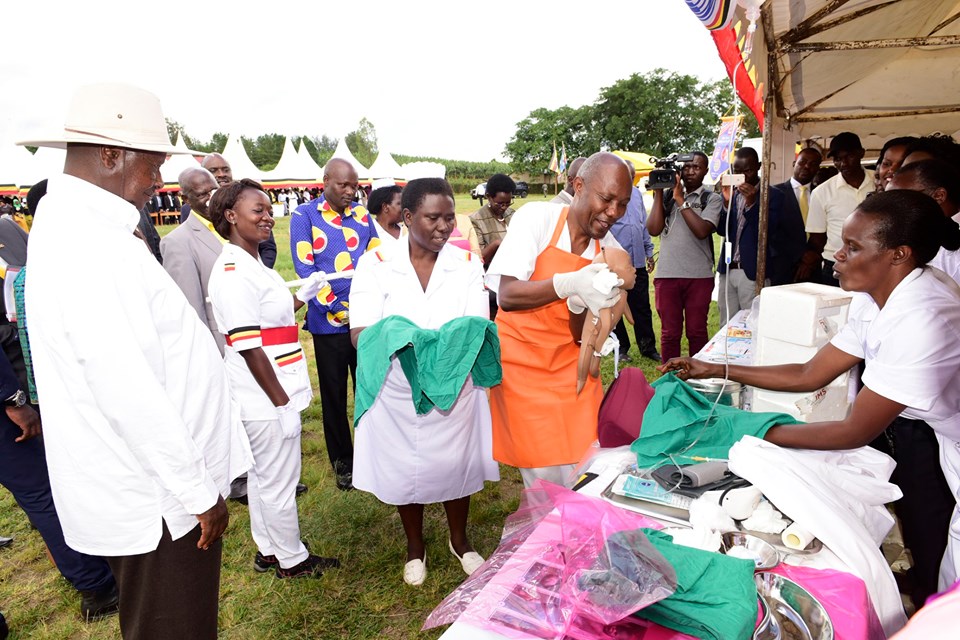 Regarding the reported employment of non-medical professionals to work in hospitals, especially upcountry, the President instructed the Health Minister, Ruth Aceng, to ensure that it stops. He commended the nurses and midwives for their excellent service to the country that, he said, is lifesaving service.

Health Minister, Ruth Aceng, who represented Minister of Education and Sports, Mrs. Janet Museveni, reported that her Ministry is studying the reported high tuition fees levied by nursing schools with a view to lowering them. She called for intense specialised training of nurses and midwives in the country and abroad to equip them with enough skills to take care of patients.

She commended the commitment of nurses and midwives in service delivery noting that their resolve and commitment has seen the country register commendable progress, especially in wrestling down maternal and infant mortality rates.