MITYANA– From the time the sun sets until midnight – in the space of only six hours – 1 in 3 children in Uganda would have experienced at least physical, sexual or emotional violence, a survey report show.

The survey, Violence Against Children in Uganda, is the first ever national household survey on the prevalence, nature, and consequence of violence against children in Uganda.

Conducted by the Ministry of Gender, Labour and Social development and other organizations, the survey ranks physical, sexual and emotional abuses as the top three forms of violence with every three in four young adults reporting having experienced at least two forms of violence – of either sexual or physical – during childhood.

The findings further indicate that 1 in 4 young adults who experienced sexual abuse during childhood first experienced it at 13 years or younger.

And twice as many girls than boys miss school after experiencing sexual violence.

On the other hand, nearly half of children and young adults interviewed reported to have ever experienced physical violence at the hands of their parents/caregivers, teachers and peers respectively.

Worth noting is that 68 percent of boys suffer more physical violence than girls at 35 percent, and the reverse is true for girls when it comes sexual violence.

Girls, for instance, are more likely than boys to suffer sexual abuse as 1 in 10 young women were physically forced to have sex during their childhood. However, when it comes to emotional abuse, both boys and girls seem to suffer almost the same dose of violence with a child’s mother or stepmother as the main perpetrator of the vice.

Despite the majority of girls and boys telling someone, they trust after experiencing sexual violence, they neither receive the required support nor access services after sexual violence.

Speaking at the launch of the report in Mityana Thursday, Tinah Mukunda, Operations Director, World Vision said exposure to violence at an early age can impair brain development and lead to a host of immediate and lifelong physical and mental health consequences.

“Violence against children has significant effects that threaten children’s well-being and can persist into adulthood,” Mukunda said.

“These results highlight the urgent need to strengthen programmes that prevent violence against children, respond to incidences of violence and provide survivors of violence response services in time.” 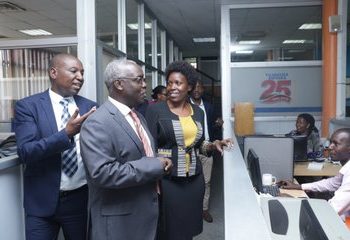