I can sack 10000 civil servants and replace them the same day, says Museveni in New Year message 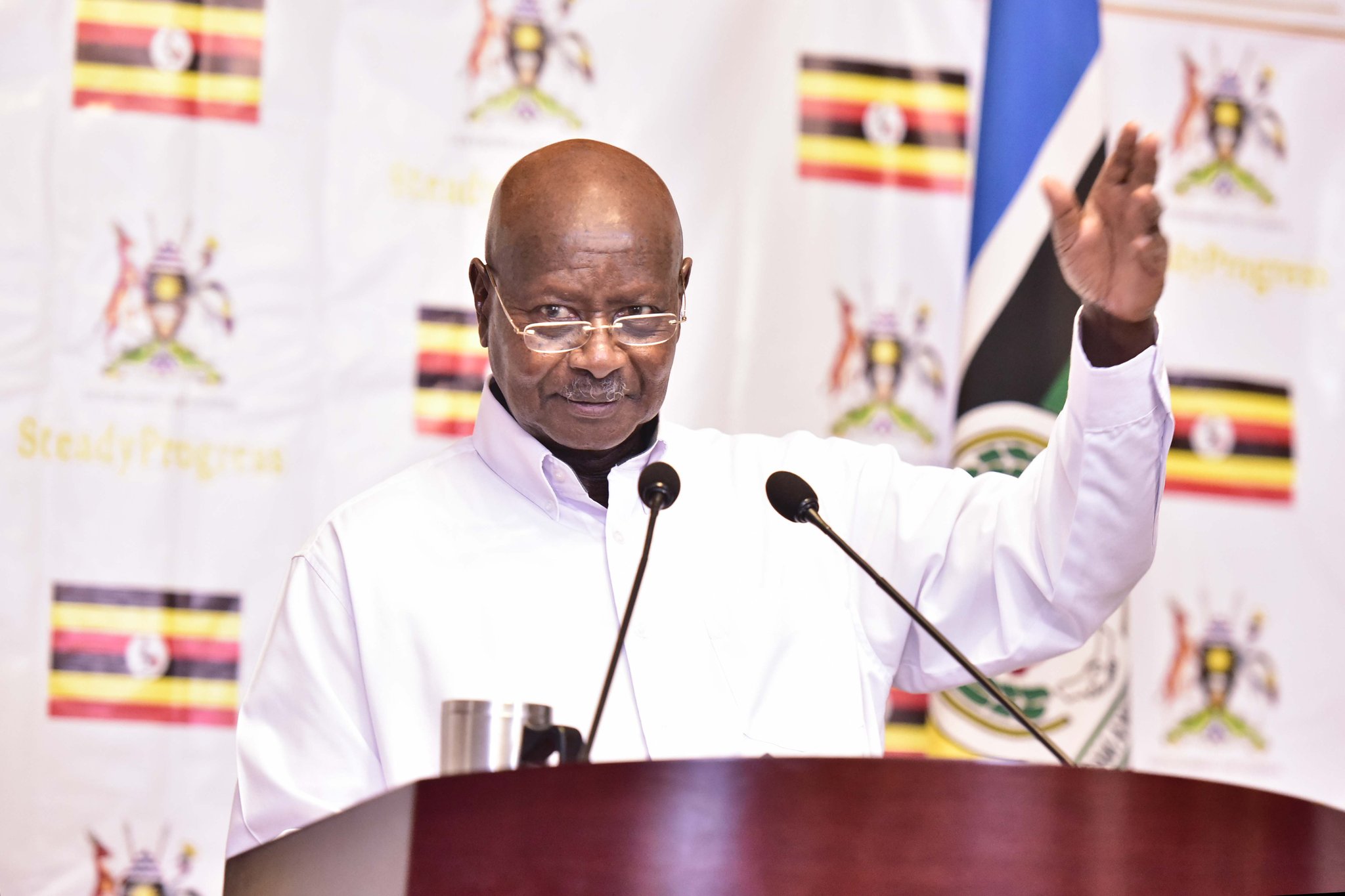 President Yoweri Museveni delivered his New Year Message at his country home in Rwakitura on December 31. He said  political actors must be clear with the words they use in the line of their respective duties. (PPU PHOTO)

The President started off by paying tribute to all those that lost their lives in the year 2018, and prayed that God comforts their families and friends.
Settled in, the outlined key issues of his speech including, Economy, Youth development and employment, ending Criminality and Political discipline.

Speaking about the  economic progress of the country, Museveni said some mistakes by some elements hurt the economy.

“In 2006, there was intervention towards the electrification of the country – which “rectified some of these mistakes”.

“In 2006, the government gave due prioritisation to electricity development and road construction. That little rectification effort of 2006 has now resulted into pushing electricity generation capacity to 1,800MW by 2020 compared to 60MW of 1986.”

The 3Ls and C
He assured the nation and investors that the economy is already growing by 6.1%, and that “soon, we shall have the three important Ls, which are low cost of electricity, low cost of transport and low cost of money (interest rates).”

“Working with Kenya and Tanzania, the issue of transport costs is being tackled by developing the rail and water transport and through UDB, we are addressing the issue of the cost of money for manufacturing, agriculture and the services sector,” Museveni said.

The president said that Government has already laid a foundation for youth development and employment.

“We immunised all youths and today, all NRM youth are free of polio and measles – save for recent cases of measles outbreak in some parts of the country.”

But there are still gaps, including skills, jobs, wealth creation and sometimes discipline, said Museveni.

He also said that by skilling youths, “we shall help them produce goods for export promotion, for example, some groups can get engaged in leather tanning and others in shoe making. Others can get into carpentry.”

He cautioned of not expecting to pray for a miracle without working.

About criminality, Museveni said 23 cases were reported in Christmas season
The President said that upgrading of the technological interventions to fight (urban) crime is already going on.

He added that he was briefed by the Police that 23 offences were reported on Christmas Day, including 11 murders, one victim of mob justice, two victims of shooting, one attempted murder, two killed in accidental fire, one case of vandalizing of Umeme cables, one case of kidnap and another of arson.

“These are mainly isolated incidents which are “straightforward” and not organised, he said adding that “this shows that vigilance is working and that by the end of 2019, our anti-crime posture will be quite different.”

Political indiscipline
Mr Museveni said that political actors must be clear with the words they use in the line of their respective duties.
He pointed out vernacular words such as “okuvuganya” and “okulwana” and also explained how the clear usage of them can lead to parties debating “peacefully” as opposed to throwing jarbs at each other.
Also to politicians: “To behave in a double-fenced way, where you have one leg in the constitutional line and the other is of unconstitutional ways – that will not be allowed.”

On Corruption
Museveni said there is no way the NRM can fail to defeat corruption.
“We have a very large number of educated people that are ready to replace corrupt officials,” said adding that “I can sack 10,000 civil servants and replace them the same day.”
He also reechoed the public to report bribery cases to a newly launched state-house anti-corruption unit saying there is a 24-hour call centre established, headed by Lt. Col. Edith Nakalema, to tackle the problem of corruption.
“Nakalema is not replacing the IGG – this should be clear,” Museveni said, explaining that it is a joint effort towards the fight against corruption.

Land ownership
“I will directly lead the struggle against illegal land evictions,” said Museveni.
The categories of those who own land include:
1. Those whose ancestors were found on that land
2. Those who were allowed on that land by landlords or owners
3: Those who are bona fide occupants of the land by 1986
4. Those who bought or inherited the land.

5. Those who are not among the four categories, but have been on the land for 12 years without anybody challenging them.

Irrigation
our goal is to transform agriculture from a rain-fed to irrigation-based sector, says Museveni.

And in so doing, there are three methods being employed:
1. Gravity-based irrigation
2. Microsolar pumping
3. Bulk water transfer
The micro irrigation projects will be 190 across the country.

Regional Integration
“When we produce goods and services, where shall we sell them?”
The President, while talking about Uganda’s recent bumper maize harvest, said the country needs more maize-milling machines, but that “we also need to sell more to our neighbours”.

“Therefore, I hope to work with fraternal people of Kenya, Tanzania, Rwanda, Burindi and South Sudan to consolidate the unity of East Africa Community,” he said.
And together with COMESA and the African Union, we shall work to ensure the unity of the African continent, concludes Museveni.
“I thank you all and wish you a happy and prosperous 2019.”