More unexpected was the removal Gen. Kabarebe, who had served in the position since 2010, and is shuffled into a new post as senior presidential advisor on security.

He is one of seven officials close to Kagame charged in France over a missile attack on a plane which killed then-president Juvenal Habyarimana in 1994.

The incident is deemed to have sparked Rwanda’s 1994 genocide which left 800,000 people dead, most of them from the Tutsi minority.

No reason was given for removing Gen. Kabarebe and Gasana from the defence portfolio and IGP respectively.

However, according to Rwandan New Times, Gen. Kabarebe’s departure is seen as a significant move towards the normalisation the country’s relations with Uganda, which have been frosty for several years.

Kabarebe is replaced at the defence ministry by General Albert Murasira, who came through the ranks of Kagame’s Rwandan Patriotic Front (FPR) which in 1994 toppled the regime and ended the genocide.

Munyuza will be deputised by CP Félix Namuhoranye in Operations and DCG Juvénal Marizamunda in Administration and Personnel.

President Kagame also made other broad changes in a trimmed cabinet, in which women comprise 50 percent.

The members of the cabinet have also reduced from 31 down to 26 in changes.

Sezibera has been a senator.

Prof. Anastase Shyaka, who has been the CEO of Rwanda Governance Board (RGB), was appointed as the new Minister for Local Government, replacing Francis Kaboneka.

Youthful Paula Ingabire, who has been the head of ICT at Rwanda Development Board, was appointed Minister for ICT and Innovation, taking over from Jean de Dieu Rurangirwa.

Ingabire has also been heading the Kigali Innovation City initiative.

The other new entrant is Soraya Hakuziyaremye, who will serve as the Minister for Trade and Industry, replacing Vincent Munyeshyaka.

The reshuffle also saw the Managing Director of Zigama Credit and Savings Bank, Maj. Gen. Albert Murasira, appointed as the Minister for Defence, taking over from Gen. James Kabarebe, who moved to the Office of the President as Senior Defence and Security Advisor.

There were also changes at the Ministry of Gender and Family Promotion where Solina Nyirahabimana is now the new minister.

The ministry was previously headed by Espérance Nyirasafari, who will now serve as the Minister for Sports and Culture.

James Musoni was appointed as Ambassador to Zimbabwe while Nelly Mukazayire has been appointed as the Chief Executive of the Rwanda Convention Bureau.

Richard Tusabe, who previously headed the Rwanda Revenue Authority, was moved to Rwanda Social Security Board as Director General. Christian Rwakunda, former Ministry of Infrastructure PS, was appointed as Deputy Director General in charge of Fund Management at the pension body.

RRA will be led by Pascal Bizimana Ruganintwali, who will be deputised by Agnès Kanyangeyo.

Other changes include the appointment of Claudette Irere as the Permanent Secretary (PS) in the Ministry of ICT and Innovation, while Jean-Claude Musabyimana was appointed as PS of the Ministry of Agriculture. 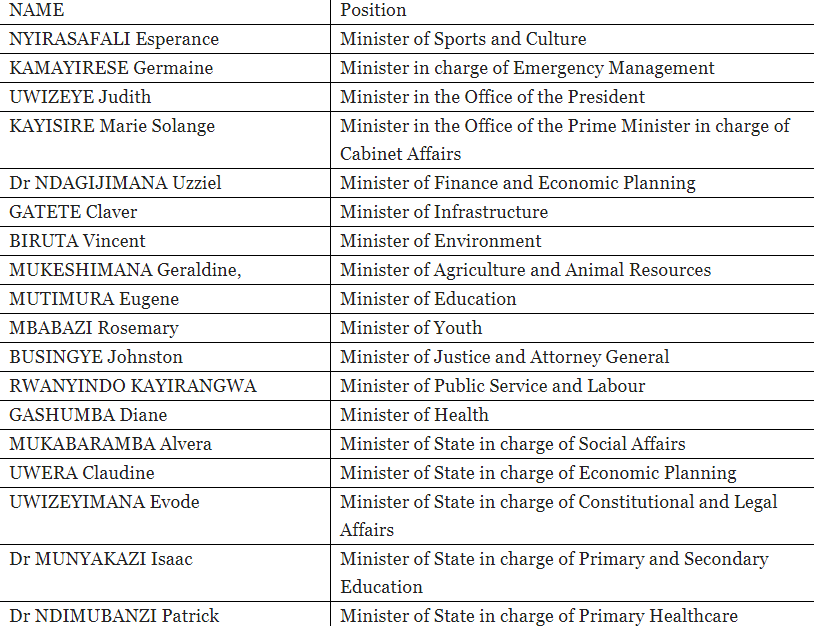