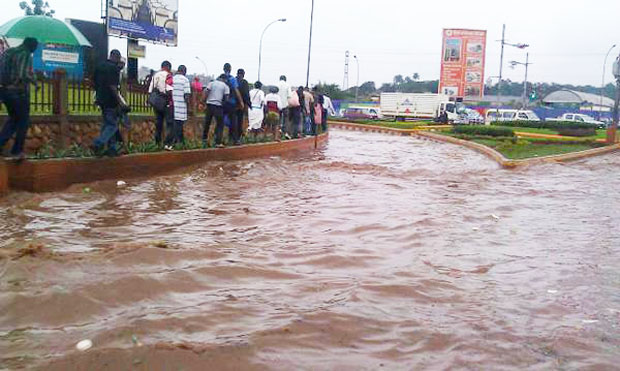 The Uganda National Roads Authority(UNRA) has joined in the fight against floods in five districts around the country.

The authority announced that it had procured 25 road equipment intended for use during emergency periods like floods and heavy rains.

UNRA procured motor graders and tipper trucks which will be allocated to UNRA stations of Kampala, Mbale, Moyo, Mpigi and Kabale.

UNRA executive director Allen Kagina said the equipment in Kampala will serve Entebbe Road which is most affected by floods.

Mr  Joseph Otim, UNRA’s director in charge of maintenance explained that  Entebbe Road was chosen because it is used by international visitors, coming from the Airport.

UNRA joined Kampala Capital City (KCCA) which this week unveiled a Master plan for the city’s drainage system to mitigate floods and its effects.

The Mater Plan requires Shs720b to implement. Dr. Micheal Kizza, KCCA’s manager in charge of drainage said the International Development Agency under the World Bank is ready to fund the project.

The funds, Kizza said will be used to work on the drainage channels of Nalukolongo, Kansanga, Nakivubo, Ggaba and Kinawataka.

“The Master Plan will incorporate the social aspects and the role of the different stakeholders in the flood risk management,” Kizza said.

Due to different land scape in the identified areas, Kizza explained that the authority will use integrated Flood Management IFM approach.

To implement this, KIZZA said KCCA will have to involve the local communities by creating awareness.

During the rainy seasons city suburbs  of Nateete,  Ndeeba, Nalukolongo and some parts of Rubaga are regularly flooded with blocked channels spilling into people’s houses.

“Whenever it rains, some people drown in this Nalukolongo drainage channel,” said Ruth Namutebi, a market vendor at Nalukolongo market.

This problem is caused by the delay to complete the construction of Nalukolongo Drainage Channel.

KCCA is supposed to construct the channel and evict people residing near it after compensating them.  But the project failed to kick off due to lack of funds to compensate the local residents.

Since the beginning of April, the city and its surrounding districts have been receiving heavy rainfall during morning and evening hours.

This has caused heavy flooding has also affected transport business. Roads in these are also impassable during the rainy seasons, making the taxis drivers who risk going there, hike the fares.

In the city centre, especially at clock towers, it normally floods. This area is very dangerous to those using bodaboda cycles.