Traffic officers in the city and surrounding areas have been asked to assist in arresting suspects that snatch bags during traffic jam rush hours rather than looking on as the helpless citizens are robbed of their valuable properties.

The call was made by Kampala Metropolitan Police Commander Moses Kafeero Kabugo, while meeting traffic commanders around Kampala and its surroundings.

During the meeting that took place in the KMP Boardroom on Wednesday May 9, traffic officers were also told that they play a big role in gathering intelligence along side other duties of maintaining highway code, regulating road safety and traffic rules.

Mr Kafeero emphasized the need for exhibition of high customer care levels and building a strong rapport with road users in order to be quality officers.

He added that the poor customer care exhibited by traffic officers while handling drivers has brought alot of bias and negative attitude, a current perception pertaining to traffic police.

“Policing shouldn’t be based on stories or fiction rather working concurrently with different units to satisfy the security needs of the public,” he said. 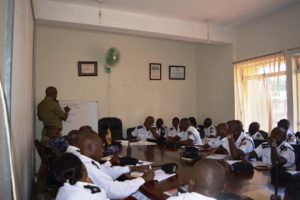 He encouraged officers to stick to the standard set of directional hand signals while guiding vehicles saying they help improve communication between drivers and guides and reduce the risk of vehicle related incidents. 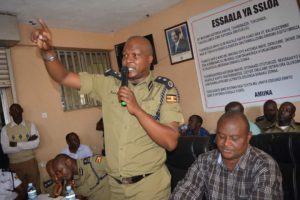 Meanwhile the KMP Commander on Tuesday May 8 pledged police cooperation for a better and secure Kampala business environment.

Mr Kafeero met Owino business owners and market vendors who voiced their security concerns, which include delayed response to emergency calls and need for improved community engagement by the area police.

Kafeero had visited the market where he addressed the business men and women, promising them an improved response to emergency calls and police increased visibility in their environs.

“You all know crime these days has no limits, no borders, we are working hand in hand with the different police units to counter cases of violent crime, drug abuse and other related security concerns,” he said , warning them against selling military like camouflage that comes in form of second hand clothes from overseas,” he said.

He added that such camouflage, a resemblance of military uniforms are normally used by criminals to commit a series of crimes and the unsuspecting public oftenly believe that the perpetrators of these crimes are security personnel. 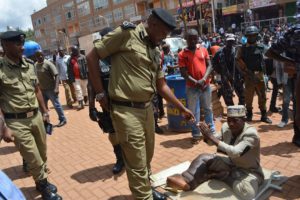 He therefore called upon the business community to always be alert, and vigilant and to report any suspicious activity in their surroundings.

He said in security, any quick accurate description of events can make a big difference in both criminal and terrorism related investigations.