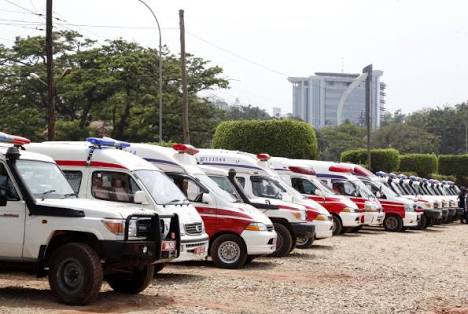 In a speech read on his bahalf by State House Comptroller Lucy Nakyobe, who was delivering the President’s pledge of an ambulance to Semuto Health Centre IV, Nakaseke district, the President directed that districts and health facilities should instead include fuel and maintenance of vehicles in their budgets.

“Districts must allot fuel for the ambulance and Health Centres must also budget for fuel. It is not right to ask patients for fuel because it defeats the purpose of my intentions,” the President said, in a message delivered by Lucy Nakyobe, the State House Comptroller.

Ms Nakyobe was accomplained by Brig Proscovia Nalweyiso, the Senior Presidential Advisor on Defense and Security matters.
The President apologized for delaying to fulfill the pledge, saying government has other priorities across the country.

Dr. Diana Atwine, the Permanent secretary in the Ministry of Health told PML Daily on phone that the ministry will implement the President’s directive to budget for fuel for ambulances.

“We shall implement within our capacity,” she said, adding that health facilities are constrained by the limited funding from the government.

“But I caution the facilities to also show accountability for the limited resources available,” she cautioned.

Atwine explained that when she was working in State House, as a head of Health Monitoring Unit, she noted that there were gaps in managing the ambulances at most public health centres.

President Museveni called on residents of Semuto to be vigilant in monitoring their health and not wait until the situation gets serious.

He urged the health workers to sensitise people and encourage them to exploit government’s immunization programmes to eliminate disease.

“For Uganda to have a healthy and productive population as well as reduction on the health budget, more emphasis needs to be put on disease prevention. Many people suffer and die from preventable diseases,” he advised.

Dr. Bernard Richard Kakeeto, who is in charge of the Health Centre hailed the President for fulfilling his pledge to the people of Semuto, adding that the ambulance, will go along way in easing service delivery.

He revealed that the health facility also serves Wakiso and Mityana district, handling about 125 out patients daily.