by OUR REPORTER | PML Daily
in NEWS
49
VIEWS
FacebookWhatsAppTwitter 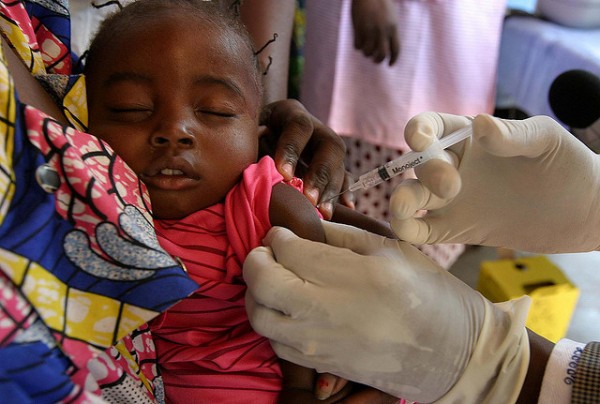 96.6 per cent children immunised against measles in Butebo District

BUTEBO- Leaders in Butebo District have announced that about 96.6 per cent of children aged between six months to five years in the district were immunided against the deadly measles following an outbreak, which had caused worry.

The campaign which  was spearheaded by the Ministry of Health,and in collaboration with the district leadership was in response to the outbreak of measles in the district early this year in the areas of  Kashebai and  Kanyum in Butebo sub-county, Petete and Kachecha in Petete Sub-county, Kachulu and Kabwangasi in Kabwangasi sub-county all in Butebo district.

He attributed the success of the exercise to collective mobilization and sensitization by all stakeholders.He also commended parents for ambracing the programme, urging that this would be an alternative to control such diseases. “The parents turned up massively with their children towards this nobble cause and as well the immunization team didn’t register any resistance from the communities and this was attributed to massive sensitization,” he said.

BUDAKA-More than 1,500 patients suffering from different ailments turned up for the health medical camp organized by the Bagwere Batakangana Association [BBA] in Budaka District, on Saturday.

The association vice chairman, Mr Fazari Kabwaka, said the health camp was organized purposely to enable people with different diseases access free medical services that are not routinely offered in their health facilities.

“The challenge that our people face is access to better services especially in rural areas. We decided to come together and make community contributions through organizing this health camp for our vulnerable people access these services. These people are sick coupled with distant places and could not possibly access these services”Mr. Kabwaka said.

Most services that were offered included dental care, sexual and reproductive health for young people including family planning, voluntary HIV/AID counseling and testing, blood donation and door recruitment, health education and sensitization on hygiene and sanitation including menstruation hygiene, optical and cancer
screening

Bagwere Batakangana is an umbrella association uniting Bagwere based in Kampala and other surrounding districts. It stands on the pillars of community development, economic empowerment, education, health and environment.

Other partners in that camp were Rain Uganda, AIC, Pace and Bugwere FM.

BUDAKA-Shock engulfed Budaka District employees when an 80-year old woman collapsed last Wednesday  afternoon and died on the verandah of the district.

It’s reported that the 3.30pm incidence occurred soon after the district council chaired by the district speaker, Mr Sam Mubalya, had just ended discussion on the budget estimates and other government business as laid on the order paper.

“ It was quite unfortunate and regrettable incidence that the old woman died under such circumstances but as Police,we were alerted about the  incidence as soon as it happended ,and we responded only to find the old woman lying dead on the district verandah”Mr Kamulya said.

He explained that police took several statements from the eyewitnesses to help establish the cause of death of the old woman, adding that police suspect that the deceased might have had previous complications.

This was the second edition of the annual Uganda Wildlife Authority Games-sponsored UWA at Kidepo Valley national park.

Murchison Falls National Park topped in football, was second in athletics and was second in netball and third in range shooting at the event in which a total of eight conservation areas under UWA took part. The games climaxed last Monday evening.

Murchison falls however, gained a good measure of revenge over Queen Elizabeth national park in football, ejecting the holders on 3 against 1 at the semifinal stage before beating Lake Mburo national park on penalties 3 -2 in the finals to claim that gong. The football semifinal between Kidepo valley national park and Queen Elizabeth was intriguing, ending in a 4-5 penalty shootout win for the later after a  2 -2  draw after normal time.

Mr Chemonges Mongea Sabilla, the deputy director legal and corporate affairs described the Inter-Conservation areas games as a target by UWA to build team work and exploit the talents of the workers.

“For us everyone is a winner here because our target of building a team spirit has been achieved. These games are rotational and we are proud to announce that next year we shall be in another conservation area,” said Mr Chemonges after the final. The RDC Kaabong Mr Simon Lolim who presided over the closure of the games and praised the UWA and sponsors for a job well done.

Entebbe – In preparations for the CECAFA Beach soccer tournament this year in Uganda, the Confederation of African Football general secretary Amry Fahmy on Monday March 26, commissioned the construction of an arena worth $200,000 at Entebbe that will host the tournament.

FUFA’s first vice president Justus Mugisha, who doubles as the project manager said the arena that will cost a total of $200,000 (about sh750m) will be ready in time for the May 2018 tournament.

Mugisha noted that construction is being co-funded by CAF and FUFA who secured land through partnership with Entebbe Municipal Council through the Public Private Partnership (PPP).

FUFA president Moses Magogo during the commissioning said the arena will not only help in the development of the game but become av tourist attraction to raise revenues.

Magogo noted that this was the first time that a CAF committee deliberated on football development in Uganda.

Twelve CECAFA member countries including Kenya, Tanzania, Zanzibar, Sudan, South Sudan have confirmed participation in the May tournament.  Others are Djibouti, Rwanda, Burundi, Somalia, Eritrea and the host Uganda.