by OUR REPORTER | PML Daily
in NEWS
9
VIEWS
FacebookWhatsAppTwitter 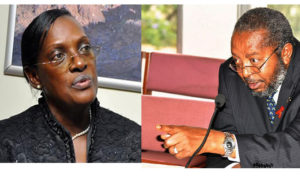 Former Bank of Uganda Director for Supervisions Justine Bagyenda, has Shs19b stacked away on three accounts, making her several times richer than her former boss, Dr Emmanuel Tumusiime Mutebile, who is the highest paid salary earner in Uganda.

Sources have intimated to PML Daily that the money was accumulated in six years.

Dr Mutebile, the central bank governor earns Shs53.3 million per month. According to statements available, Bagyenda has been banking Shs66.6m per week, making it Shs266m per month between  2013 and 2018.

BoU auditors were further shocked on learning that Bagyenda operates both Shillings and Dollar accounts in Diamond Trust Bank, Centenary and Barclays  banks on which she is statching away the billions, although  how she accumulated all this money has remained subject to lots of queries.

Sources reveal that Bagyenda owns  account number 5106903903 in Diamond Trust Bank described as ‘low start savings account’ which as of December 01 , 2017, had a total of Shs11.4 billion.

Bagyenda has worked at the central bank for only six years.