Fr. Musaala, Ssonko back to Catholic Church after public apology

The Rev. Fr. Anthony Musaala has publicly apologised for “greatly sinning” by rebelling against the authority of the Catholic Church for which he was declared “self excommunicated”.

Fr. Musaala has, during the Thursday morning Chrism Mass at Lubaga Cathedral, made a public apology and declared he was willing to suffer any punishment as prescribed by the Catholic Church.

He appeared together with another renegade priest Dr. Fr. Deogratius Ssonko who also made a public apology, with both greeted with defeaning cheers by the congregation at Lubaga.

The Archbishop of Kampala, Cyprian Kizito Lwanga led the mass.

Citing the prodigal son verses in the Bible, Fr. Musaala said; “I was a false prophet in whatever I was doing.

Fr. Ssonko said he has since last year been living with a family in Zzana as directed by Archbishop Lwanga.

The two priests last year denounced their rebellion and ceased association with Fr. Jacinto Kibuuka, who rebelled against the Catholic Church after he was sanctioned for disciplinary action.

He thought to break away from the Church and join the Eastern Orthodox rite crowning himself a Bishop, but the Uganda Episcopal Conference challenged his consecration saying he had no right of succession.

Fr. Kibuuka continues to rebel against the Catholic Church and runs his Mamre Prayer Center in Namugongo, however, the crossover by some of his key allies will be seen as a major blow to his movement. 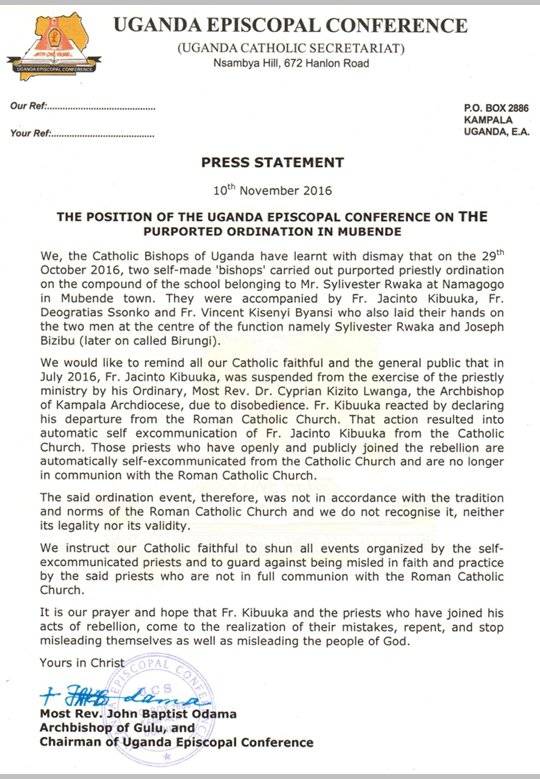 He will face it! Anybody who commits crime whatsoever, will pay the price, says Minister Oryem on Lumbuye arrest

Over 100 pedestrians arrested, hundreds of cars and motorcycles impounded as police intensify crackdown on non-compliance to curfew directive