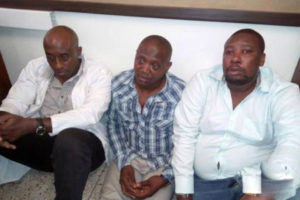 Five people including a woman  were yesterday charged and remanded to Luzira prison  by the Law Development Centre (LDC)  court over attempting to obtain Shs1.6 billion from a businessman under the guise of selling him pure gold.

The suspects including Stellah Birungi Dindi an electrical engineer , David Kironde, Richard Kamugisha , Kibirige Kirimana ,and Yazid Kabonge appeared before Grade One magistrate George Watyekere and have been charged with four counts including, impersonation, criminal trespass, conspiracy to commit a felony and attempt to obtain money by false pretence .

They denied all the offenses and were sent on  remand at Luzira prison until tomorrow (Thursday) when court will make a ruling on their bail application.

Prosecution  led by Ms Loy Karungi states that that the accused  between December 2017 and January 2018 at Makerere University and Lagrande Hotel in Kampala, conspired to steal Shs1.6 billion from a one Akil Nasri by falsely pretending to be selling him 14kgs of pure gold .

A scuffle ensued as the suspects refused to leave court for hours. Later plain-clothed security operatives also tried to arrest the same suspects.

After hours of resistance, police reinforced and managed to whisk the suspects away amidst protests from them.