Govt to investigate telecoms over simcards used in kidnappings 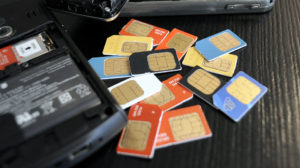 Cabinet has directed ICT Minister Frank Tumwebaze to investigate the presence of many unregistered sim cards that are being used by criminals in the rising spate of kidnappings that have engulfed the country.

Cabinet also ordered the minister to investigate how some of the simcards are registered under forged identities and report back within 14 days.

Addressing journalists at the Uganda Media Centre in Kampala on Monday, Mr Tumwebaze revealed that government, in its findings, found the killers and kidnappers using Airtel sim cards.

“Cabinet discussed and noted with great concern reports of illegal simcards still active in the market and being used by criminals to hide identity,” he said in a statement.

The minister also said a security brief to Cabinet revealed that the sim cards used by the kidnappers have no identity yet they are active.

“We have not got any complaints from the Uganda Communication Commission concerning what you are talking about,” Mr Bhati said.

Government in May last year ordered all the telecom companies to switch off unregistered phone numbers. However, some have remained active.

“Airtel Uganda follows a strict and robust compliance culture and all our customers are registered in accordance with the process. We have provided all the details to the regulator as requested,” a written communication sent to PML Daily read in part.

On accusations that Airtel has the largest number of unregistered simcards on the market, Bhati said the telecom company has provided all the required details to UCC. “Airtel Uganda follows a strict and robust compliance culture and all our customers are registered in accordance with the process. We have provided all the details to the regulator as requested,” a written communication sent to PML Daily read in part.

To a get sim card, one requires to present a national identity card.

The Cabinet’s order comes on the backdrop of increasing kidnaps where perpetrators use unregistered sim cards. Police insist that the killers of Susan Magara, a former employee of Bwendero Dairy Farm in Hoima District, used unregistered phone numbers to call her father, demanding a Shs3.6b ransom.

Police at the beginning of February arrested two men for kidnapping a three-year-old Favour Nabukenya and demanding for a ransom of Sh60m from the parents.

The suspects had threatened to sell the kid to DR Congo if her parents failed to send the money. But Police managed to arrest them in Bweyogerere, while moving around with the kid.

In 2017 24 kidnap cases were reported to police, 15 were rescued, while eight are still missing. In February, six people were kidnapped and still are missing.

Meanwhile, MPs have threated to block Police’s budget for the next financial year over what they described as failure by the Force to investigate and apprehend kidnappers.

Mr Theodore Ssekikubo, the Lwemiyaga MP, said there is no reason why security agencies such as police and the army should continue getting huge budgetary allocations “for doing nothing”.

“It is time we ask Parliament to block the budget of these security agencies because Ugandans are protecting themselves,” Mr Ssekikubo said