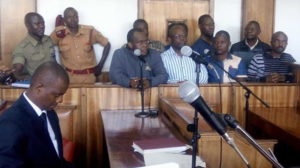 Buganda Road court has given the Direcor of Public Prosecutions (DPP) and the Red pepper directors two weeks with in which  to conclude negotiations and file a consent notice in court, else court will fix their case for hearing.

Chief magistrate James Ereemye Mawanda says he has given the parties’ negotiations  a last  chance until the February 28, else he fixes the case for trial.

This is  after state prosecutor Abdul Salaam Waiswa has revealed to court presided over by  Chief magistrate James Ereemye Mawanda that negotiations between both parties are on-going and that court should give them chance.

The Red Pepper directors are facing charges of publishing news that is prejudicial to national security and disturbing the peace  of President Museveni, his brother Gen Salim Saleh and security minister Gen Henry Tumukunde .

Since November last year, Red pepper offices in Namanve, near Kampala remain closed and under 24 hour surveillance by police. This has left the paper operating in  a temporary office at the Social Security House in Kampala.