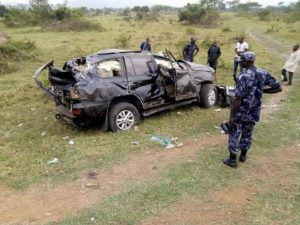 Uganda loses about 10 people per day to road accidents, the highest number in the region, a UN report has revealed.

The Uganda Road Safety Performance Review Report released by the United Nations Economic Commission for Africa on Wednesday indicates that by the end of December 2016, 14,474 road traffic crashes had been recorded.

However, the fatalities (number of people dying as a result of these accidents) increased from 3,224 to 3,503 persons over the same period and the trend has been the same for the last 5 years.

Speaking at the release of the report in Kampala, Mr Jean Todt, the UN Secretary General’s Special Envoy on Road Safety, urged the Uganda government to amend its road safety laws to scale down the deaths.

“We know that the situation is challenging because one death alone is already too bad. We need to revise the 1998 road safety and Road Safety Council Act,” Mr Todt said.

He added that the government should, among others, review its motor vehicle inspection policies and establish a national drivers training curriculum in order to reduce the road carnage.

The report, which indicates that boda boda-related accidents are the common, indicates that motor vehicle inspection and driver training are not effective while roads are constructed without provisions for cyclists and pedestrians. The report also indicates that accident response on high ways is very poor or non-existent

Ms Rosa Malango United Nations Resident Coordinator, castigated government for not prioritizing road safety, which she said is costing the economy Shs.4.4 trillion per annum or 5 percent of the country’s GDP.

“Road safety in Uganda is a serious challenge but has not attracted the attention it deserves. Uganda loses ten people per day the highest in East Africa meaning we are losing children and members of the workforce estimated at Shs.4.4trillion which is five percent of the GDP,” Ms Malango said.

The UN report recommends that an independent agency be set up to handle traffic in the country.

In response, State Minister for Transport Vincent Bagiire decried the rampant accidents on Ugandan roads but said the report will help government fight the trend.

“When I joined this ministry, I wanted to abandon the appointment because I would be called in the middle of the night to find out details about terrible accidents. But we have tried and we are moving ahead,” Mr Bagiire said.

He said government has since embarked on registration and licensing of all bus drivers, transfer of buses from the city centre, abolition of sugarcane loaded trucks on Jinja Kampala highway and imposing high taxes so as to reduce road accidents.

“We finished with the monsters, the bus drivers, and next are taxi drivers, who we are going to register and license. We want all vehicles on our roads inspected and this is where we want Parliament to assist us,” he said.

The report also indicates that there is a dilapidated road network in the country, with most of the roads needing overhaul as they have outlived their existence and the road repairs tend to be too costly and serve little or no value as new potholes continue to develop.