KAMPALA–FDC’s Francis Mwijukye has dragged the Inspector General of Police, Gen Kale Kayihura, to court over medaling in the party’s internal politics.

In an application filed Tuesday afternoon, Mwijukye through his lawyers; Sewankambo and Co Advocates, seeks court to declare that the IGP doesn’t have powers not to issue any directive barring FDC presidential aspirants from conducting public rallies.

Mwijukye also seeks a declaration that Kayihura’s barring, cancelling, stopping, disrupting, interfering and blocking consultative meetings and rallies by FDC presidential aspirants violates fundamental human rights and other freedoms like equality and freedom from discrimination, protection of right to life , protection of personal liberty and respect for human dignity and protection from inhuman
treatment.

He thus wants court to hold Kayihura personally responsible for the damage of property and injuries suffered by people across the country as a result of the IGP’s directives.

In addition to this, Mwijukye wants an injunction barring the IGP from issuing other communications of this nature, which he says contravene the Constitution, the Public Order Management ACT and the Political Parties Act.

“In response thereof, it is our advice that in view of the fact that your forthcoming party presidential elections are going to be held at the Electoral College level, your campaigns therefore be done indoors or places like halls, hotels etc as the case may be,” wrote Mugenyi, the Assistant Inspector General of Police.

“For that matter, there shall be no public rallies nor processions in those areas of your campaign.”

The FDC goes to polls with Mugisha Muntu and Hon. Patrick Amuriat in the race for the top party seat. 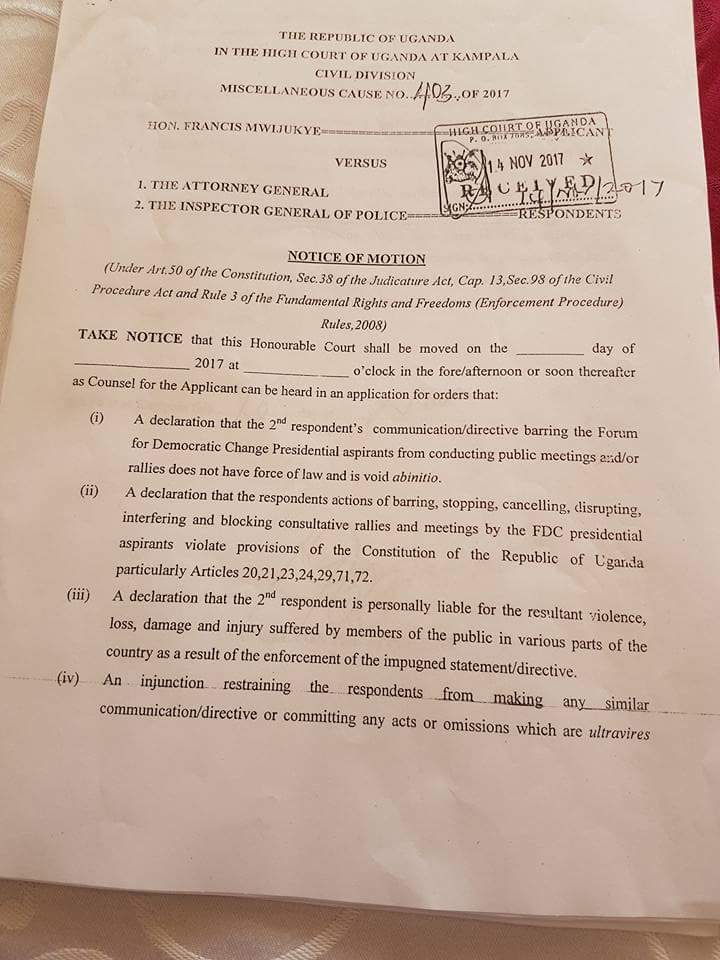