One killed as Kenya police shoot at election protesters 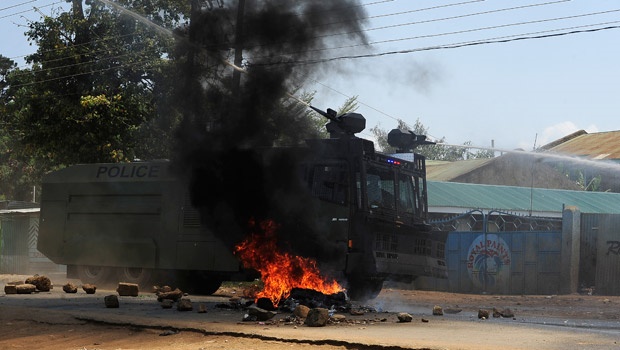 A Kenya security truck drives past a burning barricade in Kisumu. AP Picture.

Kenya’s election took an ominous turn on Wednesday as violent protests erupted in the capital and elsewhere after opposition leader Raila Odinga alleged fraud saying hackers used the identity of a murdered official to infiltrate the database of the country’s election commission to manipulate results.

Soon after Odinga spoke on television, angry protesters in the slums of Nairobi and the opposition stronghold of Kisumu in the southwest, burned tires, set up roadblocks and clashed with police, witnesses said.

With results from almost all of the polling stations counted, President Uhuru Kenyatta was shown with a wide lead over Odinga in his bid for a second term.

Many parts of Kenya, east Africa’s commercial hub, were calm a day after the elections for president and more than 1,800 other posts down to the county level. But the violence stirred memories of the unrest following the 2007 vote in which more than 1 000 people were killed.

Odinga lost that election to Mwai Kibaki. He also lost the 2013 vote to Kenyatta and took allegations of vote-tampering to the Supreme Court, which rejected his case.

“The fraud Jubilee has perpetuated on Kenyans surpasses any level of voter theft in our country’s history. This time we caught them,” he tweeted.

Meanwhile, protesters in the Kenyan city of Kisumu said the police were shooting at them and using tear gas.
Sebastian Omolo told The Associated Press that chaos broke out as soon as Odinga finished speaking on television.

Kisumu shopkeeper Festus Odhiambo said he was praying for peace even as roads into the city’s slums have been blocked by bonfires and boulders. The city has been a flashpoint in past elections.

A witness says hundreds of protesters are rioting in Kisumu.

Kisumu, a port city on Lake Victoria, is one of Kenya’s largest urban centres. Authorities have been concerned about possible violence following elections on Tuesday.

Odinga alleged that hackers used the identity of a murdered electoral official to gain entry to the election commission’s database in order to manipulate voting results.

He was referring to Christopher Msando, an election official in charge of managing information technology systems who had sought to reassure voters that the results of Tuesday’s elections would not be exposed to tampering.

On July 31, officials announced that Msando had been found tortured and killed two days after he went missing in Nairobi.

Kenya’s National Super Alliance (NASA) presidential candidate Odinga rejecting the interim results, also said that according to their tallying centre, he had polled a total of 8.1 million votes against Uhuru Kenyatta’s 7.2 million.

In a press conference in Nairobi, Odinga said the hackers used the log-on credentials of Msando, the Independent Boundaries and Electoral Commissions ICT manager whose body was found in Muguga forest two weeks ago alongside that of a woman.

Raila produced logs which, he said, were evidence of how and when the database was hacked into, calling the digital break-in the biggest fraud in Kenya’s history.

NASA’s chief agent lawyer James Orengo said at the time of the news conference, NASA had received only one Form 34A. This is the authentication of voting results that is co-signed by IEBC returning officers and political party agents, scanned and transmitted to party secretariats and the IEBC,

In a news conference hours after Raila’s statement, IEBC chairman Wafula Chebukati said the commission was taking the matter seriously because it involved the voting rights of Kenyans.

“As of now, we cannot say whether the system has been hacked into or not,” he said while promising thorough investigations into the matter.

He assured Kenyans that the commission was not in a hurry to announce the results before verifying Form 34As.

“The commission is going a mile longer. We will look at transmitted documents before making the final announcement,” he said describing the NASA statement as “aspersions” which would be investigated to establish if they are true or not. 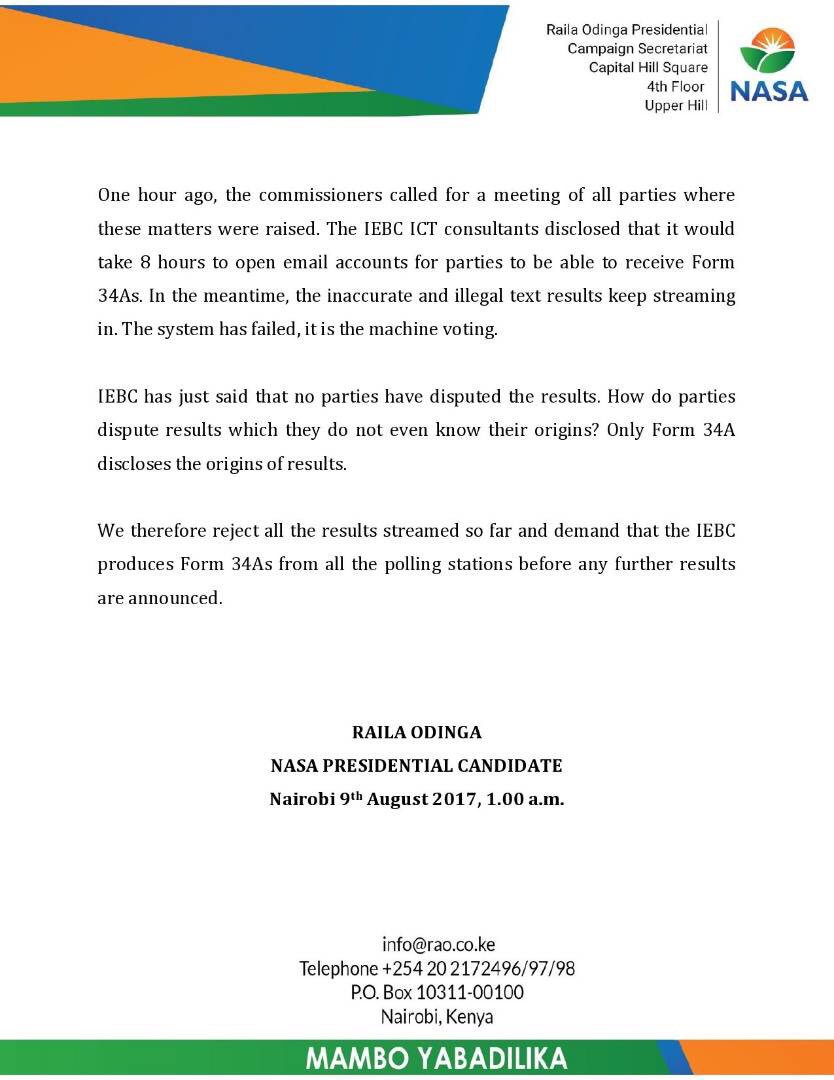 Responding to the NASA statement, Jubilee Secretary General Raphael Tuju accused NASA of spreading rumours and asked it to produce proof of the electoral fraud.

And, in another press conference Acting Interior Cabinet Secretary Fred Matiang’i assured Kenyans all was well and that the government would use all constitutional means to protect life and property. 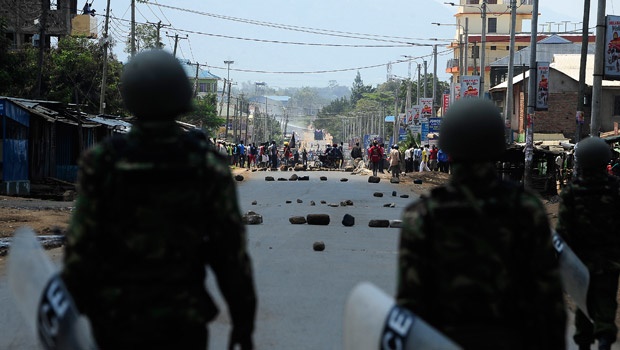 Kenyan police in stand-off with protesters in Kisumu. AP picture.