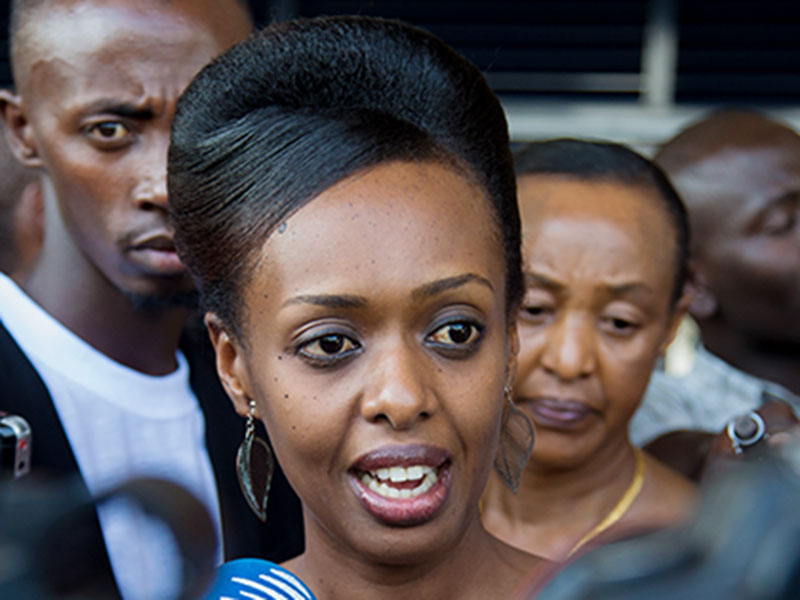 Explaining some of the reasons Rwigira’s presidential dream ended before it had even started  Rwanda’s electoral commission chairman Kalisa Mbanda, named the ‘dead signatories’ as Augustin Rudahara and Innocent Maniraguha.

The decision effectively shut the door to Rwigara’s presidential ambition, leaving only woman who was trying to challenge Kagame’s continued stay in power out in the cold.

“On her list, Rwigara submitted Augustin Rudahara, who died on April 16, 2016, at Kibagabaga Hospital and was laid to rest the following day in Busanza public cemetery,” Mbanda said, adding that the 35-year-old “conspired with Joseph Uwingabire, an electoral commission volunteer in Rulindo District [northern Rwanda] in forging the signatures of 26 voters.”

Diane Nshimyimana Rwigara conspired with Joseph Uwingabire a NEC Volunteer in Mbogo, Rulindo District in forging the signatures of 26 voters

Rwigara was not readily available for comments as she would not pick her known mobile phone contact, but sources close to her bid said she would address the media in coming days.

Along with Rwigara in submitting signatures of persons the electoral commission said have been found to be deceased was Gilbert Mwenedata, who had a one Enock Nyombayire from Gasabo District in the capital Kigali as one of his signatories.

The commission said it had proof that Nyambaire was deceased.

Of the six people who had submitted bids to run for presidency of the ‘tiny’ Central African state, independent aspirants Rwigara, Mwenedata and Fred Sekikubo Barafinda failed to meet the nomination requirements to contest in the August poll.

Last week, the electoral commission named only two aspirants on the provisional list of the candidates and asked the four independent hopefuls to fulfill the requirements that were lacking in their application.

The commission had given Rwigara, Mwenedata, Barafinda and Philippe Mpayimana until July 6 to submit all the needed requirements ahead of Friday’s final announcement.

But it said yesterdat that only Mpayimana fulfilled the electoral code demand.

Mpayimana, a former journalist, joins Frank Habineza, of the Democratic Green Party of Rwanda, as the two challengers to Kagame.

Kagame and Habineza were endorsed by their parties and had already been shortlisted in the provisional list released last week.

However, the same could not be said of independent aspirants, who had to fulfill a plethora of requirements before they could qualify to have their name on the ballot paper come August 4.

Rwanda’s electoral code requires independent presidential aspirants to present a minimum of 600 signatures of eligible voters with at least 12 from each of the 30 districts of the country.

Other requirements include proof of citizenship and birth certificate.

“After we verified the signatures, Rwigara, Barafinda and Mwenedata fell short of the required number in all districts,” Mbanda told journalists in Kigali on Friday.

Rwigara, a daughter of a prominent businessman who once was one of the financiers of Kagame’s RPF party, had earlier in the day tweeted that she was looking forward to “fairly and justly being on the final list of presidential candidates.”

On Wednesday, Rwigara said she had submitted additional requirements, including 120 signatures from 11 districts.

I am looking forward to fairly and justly being on the final list of presidential candidates this Friday July 6th 2017.

“This brings the total number of signatures collected and submitted to 1,105, almost double the NEC requirement of 600,” Rwigara said in a tweet.

However, the electoral commission verification threw out some of her signatures, just like it was with the other independent aspirants.

“Of the 600 signatures required from each aspirant, Rwigara managed to present only 572 valid signatures, while Barafinda only gathered 362 from 18 districts, with Mwenedata presenting 522, with none from Burera District,” the commission said.

The aspirant Fred Sekikubo Barafinda didn’t submit a Certicificate of Rwandan Citizenship for one of his parents.

The electoral commission also said Rwigara had some of the recommendations from known members of opposition Social Party-Imberakuri, which “contradicts the electoral code.”

Rwigara’s shot at the presidency has come at a price. Besides the wasted effort, pictures of her alleged nudity were leaked on social media a day after she declared her intention to challenge Kagame’s stronghold on power.

The three presidential candidates are expected to hit the campaign trail from July 14, a process that runs for 19 days until election eve on August 3 when Rwandans decide who will steer their country for the next seven years.