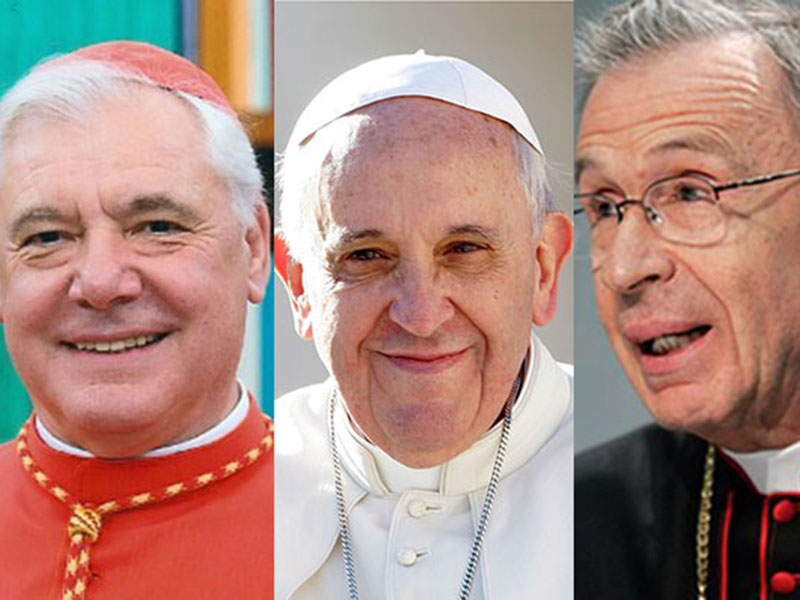 By Our Reporter & Agencies

VATICAN. Pope Francis has removed the powerful Prefect of the Doctrine of Congregation of the Faith Gerhard Cardinal Mueller a move that has shaken the Roman Curia.

The Catholic News Agency reported that German Cardinal Mueller 69, is to be replaced by Spanish Archbishop Luis Francisco Ladaria Ferrer, 73, as the Catholic Church’s new chief of doctrine—one of the most powerful positions at the Vatican, seat of the Catholic Church. It’s is considered a number 3 position in the Vatican hierarchy.

The Vatican has confirmed  that Cardinal Mueller, one of the conservatives in the Roman Curia will not have his five-year term as head of the powerful congregation responsible for church doctrine renewed.

Consequently, his name has already been replaced on the authoritative Catholic Hierarchy, that documents the record of the Catholic Church.

His replacement, Archbishop Fadaria, Like Pope Francis, belongs to the Jesuit Order.

The AFP reported that Mueller, 69 was one of the cardinals that have clashed with the Pope over key reform issues.

According to the AFP, Mueller was one of several cardinals who questioned Francis’s determination for the Catholic Church to take a softer line on people traditionally seen as “sinners”, including remarried divorced people who want to take Communion.

Mueller had also been caught up in the controversy surrounding the Church’s response to the clerical sex abuse scandal after his department was accused earlier this year of obstructing Francis’s efforts to stop internal cover-ups of abuse.

However, Cardinal Müller was quoted by the Catholic News Agency as saying that the decision to remove him from office was normal, and was not the result of conflict between him and Pope Francis.

“There were no differences between me and Pope Francis,” Cardinal Müller told Allgemeine Zeitung, a regional German paper from Mainz.

Müller spoke to the paper while in Mainz for his 50th high school reunion. He traveled to the city Friday after meeting with Pope Francis earlier that morning, receiving the news that his term as Prefect of the Congregation for the Doctrine of the Faith would not be renewed.

The German Cardinal said that while he doesn’t know the specifics of why his 5-year term was not extended, the Pope informed him of his desire to move away from trend of renewing curial mandates.

Although it has until now been common for these 5-year terms to be renewed, Müller said that during their meeting, Pope Francis said he wants to progressively move toward a general practice of limiting mandates to just 5 years, “and I happened to be the first one to which this applied.”

“It doesn’t matter much to me,” Müller said, adding that “at some point, everyone has to stop.”

Müller was appointed to the office by in 2012 by Pope Benedict XVI before his resignation that year. Pope Francis renewed the German Cardinals term on his election in February 2013.

According to the authoritative Catholic Hierarchy, the Congregation promote and safeguard the doctrine on faith and morals in the whole Catholic world; so it has competence in things that touch this matter in any way. (Pastor Bonus, 48).