Kenya: Two gunmen and a police officer were killed in an attack on DP William Ruto’s Sugoi home on Saturday.
Three gunmen ambushed shortly after Ruto left for a rally in Kitale. GSU guards and workers were the only ones at the residence at the time. It is feared several workers are trapped in the home.

Witnesses said the gunmen are Somali and that they had pretended to be selling sheets. They said the attackers burned the guard’s house after getting into the compound.

A GSU officer guarding the gate was shot and injured and his gun snatched before fighting began.
A corporal in charge of the home’s security was killed. Gunshots are still being heard at the home where it has been established the attackers gained access to the armoury. About eight Recce Squad officers have entered the home.

Rift Valley regional coordinator Wanyama Musiambo and Uasin Gishu county commissioner Abdi Hassan are among security chiefs at the scene. MPs Oscar Sudi (Kapseret) Alfred Keter (Nandi Hills) and several aspirants are among people waiting near the home. Journalists and members of the public were kept about 400m away. 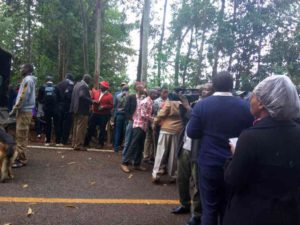 Garang; Africa's noble son who died fighting for his people