How Rwanda-Uganda border crossing came to a halt

KATUNA – A diplomatic feud between Rwanda and Uganda has stopped most cross-border movements between the two countries, a situation that has had a huge effect on daily life for families in both countries.

A row between the two neighbouring countries has been simmering for the past two years but seems to have escalated when Rwanda closed its borders recently.

Both countries have traded accusations of interference in each other‘s affairs.

Officially, the Rwandan government says the border is open but many people trying to cross over are not able to do so.

Who is being affected?

The impact of the border disruptions is extremely personal for local communities.

A young Ugandan man – Deo Hategeka – expressed his anger and frustration that his means of earning a living had been disrupted by the border row.

He usually makes just over $5 (£3) a day working as a taxi conductor ferrying passengers across the border.

Another Ugandan trader Bedia Nizeyimana, who runs a shop at the border, says his business is struggling.

A warning by Rwanda‘s government to its citizens not to travel to Uganda has meant no business for the traders.

Ugandans are also hesitant to make the crossing because of the tensions.

Other low-skilled workers relying on a daily wage like cargo porters, currency traders and Rwandan labourers have been left idle.

There is also the issue of food.

Early this week, grief and sorrow engulfed the Ugandan side of the border at Kyanika after a pregnant woman in her mid-30s collapsed and died trying to flee Rwanda Army who tried to stop her and others from crossing over to Uganda to look for food.

Kigezi Regional Police Spokesman Elly Maate confirmed the incident and identified the deceased as Mukarugwiza Elizabeth aged 37 years and was a wife to Hakizimana Dan a resident of Kingi Village in Nyamirima, Musanza District in Rwanda.

Maate told this Online Publication that the deceased was in a group of other people who tried to use a porous border entry point (Panya route) to enter Uganda where they hoped to buy food but were chased by Rwandan Army who tried to stop them.

When she got exhausted, Mukarugwiza who was heavily pregnant collapsed when she had already crossed on the Uganda side of the border in Rukoro village, Nyakabingo parish in Chahi sub-county in Kisoro District where she died.

“We have registered a case where a Rwandese National who was escaping arrest from Rwanda Army as she tried together with others to enter Uganda and buy food,” Maate said. Rwandan authorities have since trashed this.

Rwandans who live just across the border say they buy basic food like potatoes, tomatoes, and fruits at the closed Cyanika border post.

Now, they have to sneak across using illegal pathways or by creating new shortcuts to bypass Rwandan security officials, for fear of arrest.

Many also commute into Uganda to access healthcare or education. Those facilities are reporting a drop in numbers.

A key feature of border towns is the big market days, which are mostly on the Ugandan side of the border.

Activity in these markets has pretty much ground to a halt without Rwandan customers.

Bigger businesses are also being hit.

Trucks taking goods to Rwanda and other neighbouring countries like Burundi and the Democratic Republic of Congo were stopped at some border posts, been delayed or had to use the much longer route via the Mirama Hills crossing. 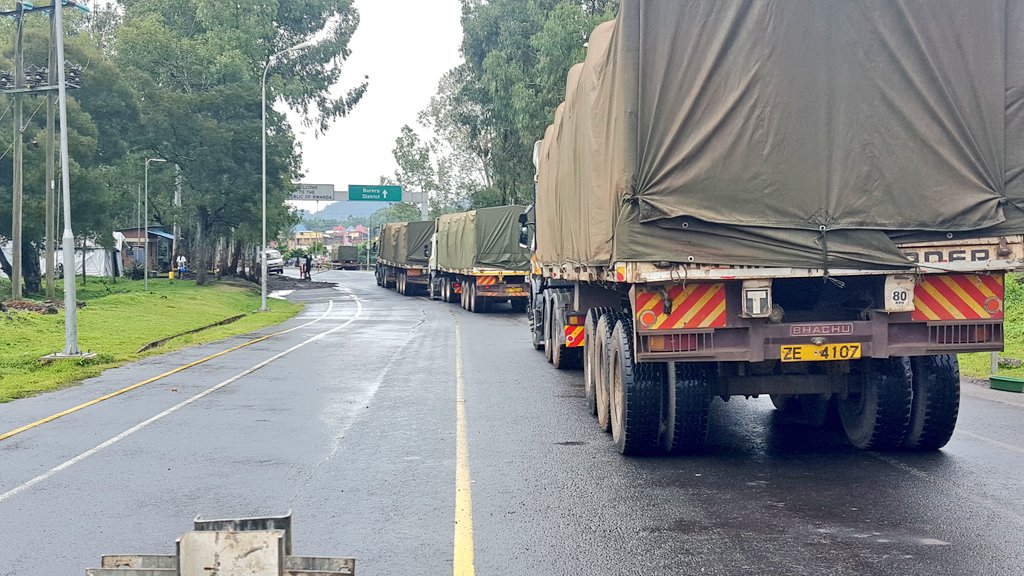 According to statistics,  Rwanda was Uganda‘s fifth biggest export market, selling about $180m worth of goods. Rwanda meanwhile exported $10m worth to Uganda.

Whereas traders in each said are calling for the trade to return to normal, President Yoweri Museveni recently told ruling party lawmakers that stoppage of Ugandan exports to Rwanda will have no impact to the economy.

Rwanda‘s Foreign Minister Richard Sezibera told the press earlier this week that the government in Kigali was making efforts to ensure its citizens were not faced with shortages or price hikes.

What is behind the spat?

They helped each other come to power through rebellions.

Mr. Kagame and other members of his Rwandan Patriotic Front fought alongside Mr. Museveni in the 1980s. In return, he supported their struggle in the 1990s.

There have also been strong familial and business ties between the political and security leadership of the two countries.

But they have fallen out over the years, including facing off in military clashes during the late 1990s war in the Democratic Republic of Congo when the two countries supported rival rebel groups trying to oust the then President Laurent Kabila.

When the first cargo trucks were prevented from crossing into Rwanda, the Rwandan government released a statement saying this was because of construction work at the busy border post of Katuna.

But that did not explain why other crossings were affected.

It soon emerged that there were deeper grievances.

Rwanda says it warned its nationals not to enter Uganda because some of its citizens had been detained and in some cases tortured, and then deported without consular support or due process.

It says more than 900 Rwandans have been deported since January 2018 and that 106 are in detention.

Mr. Sezibera has accused Uganda of supporting rebel groups trying to oust the government in Kigali.

What does Uganda say?

Uganda has dismissed the allegations from Rwanda as false.

The government has not spelt out any specific grievances against Rwanda, although there is speculation in the press that Rwanda has tried to infiltrate Uganda‘s security apparatus.

A prominent case being pointed to is that of Gen Kale Kayihura, former Uganda‘s police chief for more than a decade.

He was arrested in June last year and later charged alongside nine others, including senior police officers, a Rwandan army officer, and a Congolese national, with aiding and abetting the kidnap and repatriation of Rwandan nationals.

All the individuals deny the allegations.

There have also been cases of Rwandan nationals being arrested and deported from Uganda after being accused of espionage.

One of the prominent incidents was that of Annie Tabura, who was the general manager for sales and distribution at telecommunication company MTN Uganda.

Ms. Tabura was arrested and deported in January after being accused of undermining Uganda‘s security.

Ugandan officials say all of those detained or deported were taken through a proper judicial system.

Recently, Rwanda‘s foreign minister said his country was not interested in interfering with Uganda‘s internal issues.

Will it affect other countries?

For the moment trucks from other countries can pass through the border but they are facing delays and possibly extra costs in order to reach their final destination.

On the main highway leading to Rwanda, there were visibly fewer trucks and trailers – this could be a sign that exporters are waiting for things to get back to normal before sending in more cargo towards the border.

The biggest impact for the moment will be on Ugandan businesses which have not been able to sell goods to Rwandans, and Rwandans who cannot access food, education, and healthcare in Uganda.