As citizens wonder whether the Constitution will be amended to lift presidential age limits in effect allowing President Museveni to stay in office beyond 75 years or not Dr Abedi Bwanika a three-time presidential candidate, wants the Electoral Commission to organise a referendum to settle the controversial question.

The referendum, if the electoral body cushions to the idea, would see citizens deciding whether Article 102(5) of the Constitution should be lifted to allow senior citizens over 75 years to contest for the Presidency.

By 2021, President Yoweri Museveni will be 77 years old, meaning he will not eligible under the current Constitution to contest for the Presidency.

Dr Bwanika recently wrote to the EC boss, Simon Byabakama informing him that as a citizen, he is permitted by the Constitution under Article 255, to call for a national referendum on any issue of national importance.

Article 255(1) of the Constitution says on referenda that: “Parliament shall by law make provision for the right of citizens to demand the holding by the Electoral Commission of a referendum, whether national or in any particular part of Uganda, on any issue.”

Bwanika says he has started his campaign, drumming up support from across the country.

While appearing on a radio station last Saturday, Dr Bwanika said he is busy soliciting signatures, which he will present to the EC.

“Our campaign is moving and people are responding positively,” he said.

And if it is endorsed, this will be the second time Ugandans engaging in a referendum to determine their political destiny. In 2005, a referendum was conducted, asking citizens whether to remain in the movement or revert to a multiparty political system.

The latter system won and Museveni backed it, although the opposition parties refused to participate in the plebiscite on the ground that you cannot ask people to vote on an inherent human right, in this case the constitutional freedom and right to associate.

After the 2005 referendum, parties were allowed to legally engage in politics across. Prior to this, political organising was proscribed by Article 269 of the Constitution – limiting activity to party headquarters only.

But Bwanika’s move is being challenged by some MPs like Simeo Nsubuga of Kassanda County South and James Kakooza of Kabula County, who say the matter can only be handled by Parliament.

“Whoever is pushing for other ways is wasting his time. He should mobilise MPs instead to be on his side,” Kakooza argues.

Kakooza and Nsubuga, are known to be pushing for the lifting of the presidential age limit. Nsubuga was manhandled a little over a fortnight ago at Kabaka Mutebi’s coronation anniversary celebrations by former WBS Journalist William Ntege, accusing him of being used to push unpopular political projects.

Ibrahim Kasozi, Makindye East legislator, who is among the opposition MPs saying no to this course of action, says whether through Parliament or a referendum, Museveni should not contest in 2021.

“We are working around the clock to block Museveni from contesting. We can’t accept him to make Uganda his farm. He must leave to give others chance to govern this country well,” Kasozi says.

State House divided?
The debate on whether to lift the age limit or not is also at State House, with some presidential advisers like John Nagenda and David Mafabi apparently divided over the matter.

Nagenda, the senior presidential adviser on the media, says that after 75 years, the human body and brains are tired.

“Take an example of President Robert Mugabe who falls down,” he adds.

Nagenda is also worried that of civil unrest engulfing Uganda if Museveni died suddenly without preparing a successor, observing in a recent media interview that war is likely to break out between competing interests.

But Mafabi, the presidential private secretary on political affairs, last month joined a group of little known NRM youth leaders to launch a campaign in support of lifting the age limit, so as to allow Museveni to run again in 2021.

If Museveni gets his suspected wish, he will become one of Africa’s longest surviving heads of state – in office for four decades.

Other NRM party leaders like Uhuru Salim agree that the matter ought to be decided through a referendum.

“Let’s allow those above 18 years to decide,” he says

For now, the President is publicly distancing himself from the age limit talk, labelling such debate as rumours propagated by self-seeking people who want to derail his government from delivering quality services.

Pundits way in
Charles Rwomushana, political analyst and a former Constituent Assembly delegate, reminds the country that the age limit issue was targeting the late President Milton Obote to bar him from contesting for Presidency again even when he was exiled in Zambia.

While Yusuf Nsibambi, a senior law lecturer at Makerere University, argues that the only hope Ugandans have to block any attempt to lift the age limit is through a referendum.

“The Constitution allows the citizens to decide on any citizen affecting them. My worry is whether the electoral body will implement it,” Nsibambi argues.

Nsibambi has no faith in Parliament to block the push, explaining that since ruling party enjoys an overwhelming majority, they will vote on the side of Museveni

Human rights lawyer George Musisi meanwhile, says the age limit debate is more a political question than a legal one since the preamble to the Constitution provides for the rationale of making limits initially.

On the proposal by Bwanika, Musisi disagrees with Nsibambi, arguing that that it is extra-constitutional since a referendum is not envisaged in amending that particular provision. 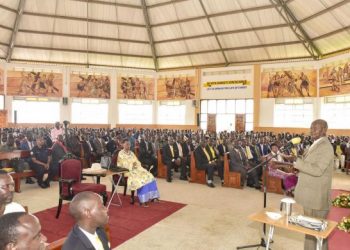 All set for global investments conference in Kampala