RAKAI SCHOOL FIRE: The nation woke up to fire again

RAKAI- The nation woke up to the horrendous news of the burning to death of 11 students and scores injured after a fire broke out at St Bernard’s Secondary School, Manya in Rakai District on November 12 this year.

The tragic event evokes memories of the 2008 Budo Junior School fire that killed 20 pupils and the subsequent rampant fires in other schools across the country.

Education authorities in Rakai District broke the silence on why they did not exercise their mandate to prevent an inferno at St Bernard’s Secondary School, Mannya.
Mr. John Baptist Kimbowa told journalists that his department is understaffed and ill-equipped–something he said has crippled down their operations.
He said his entire department has only one car and the six school inspectors who usually make impromptu visits to schools hire boda-bodas.

The district has 150 primary schools and 22 secondary schools spread in 10 sub-counties and one town council.

According to the ministry guidelines, each school is supposed to be inspected at least once a term by district inspectors.

Police arrested six people including three senior four students in relation to the inferno who are now battling the over 51 counts which include murder, attempted murder, arson and malicious damage to property.

It is alleged that four students: Halen Taremwa, Elias Edgon, Dickson Kisuule, Alex Junior Mugerwa, and two security guards Michael Tayebwa and Steven Nzeyimana set ablaze the Senior Three dormitory on November 11.
The Grade One magistrate, Mr. Tindyebwa Adyeri, however, adjourned the case and further remanded the suspects after the state prosecutor, Ms. Aminah Akasa, told the court that investigations into the case were still ongoing.

As we approached Christmas, security halted the planned reconstruction of a boys’ dormitory block that was accommodating a total of 115 students.

According to reports, the school was stopped from reconstructing the burnt structure. Henry Nsubuga, the school headteacher says that although they had already obtained resources from well-wishers for the works, they cannot proceed with the construction before securing clearance from the police.

Nsubuga told journalists that they expected to have all the affected dormitories fixed before the end December 2018 to enable them to put in place enough accommodation space for the students before the school opens for the next academic year.

Livingstone Luttamaguzi, the greater Masaka Regional Internal Security Officer-RISO says that the underlying delays are caused by the ongoing systematic investigations into the incident.

He says they are still conducting forensic examinations on samples that were collected from the scene to facilitate comprehensive investigations into the incident. 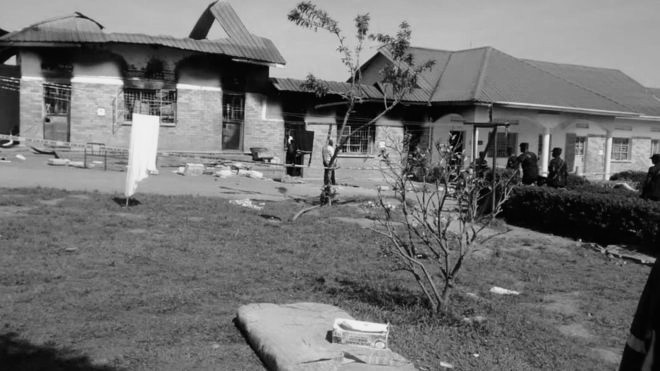 Whereas reports and guidelines of the same had plummeted, school authorities and stakeholders should take fire safety measures serious as early as during the construction of a school facility.

Secondly, there is a pattern of the fires occurring in the third term and schools should pay more attention to the discipline of their students during this period.

Schools should also ensure security to keep off intruders.
As police seek to establish the cause of the fire, let all school authorities across the country do the following, to prevent infernos.

• Install detection systems such as heat detectors, smoke detectors, alarm systems, and break glass pint, among others.
• Put in place a Fire Action Emergency Plan so that students and teachers know what to do in case a fire breaks out and carry out periodic or regular fire drills or evacuation drill.

• Have fire safety signage in any installation eg showing the direction of the exits and location of extinguishers.
• Recognise Police Fire Brigade department as a partner in fire safety promotion.
• When you get out of a burning dormitory or building, don’t run back in to save anything, your life is more precious than property. Get out and stay out!

Also, the Uganda Fire Safety Policy is there for all those operating boarding schools to observe. These are some of them.
• Schools should not exceed the maximum occupancy within any part of the dormitory.
• Maintain proper fire exits and exit signage.
• Placing and maintaining fire extinguishers in easily accessible places.
• Proper storing/using of hazardous materials that may be needed inside the building or the schools for storage or operational requirements.