MBALE – This extinct volcano is one of Uganda’s oldest physical features, first erupting around 24 million years ago.

Mt Elgon was once Africa’s highest mountain, far exceeding Kilimanjaro’s current 5,895m. Millennia of erosion have reduced its height to 4,321m, relegating it to the 4th highest peak in East Africa and 8th on the continent.

Mt Elgon is home to two tribes, the Bagisu and the Sabiny, with the marginalized Ndorobos forced to dwell deep within the forest of Benet.

The Bagisu, also known as the BaMasaba, consider Mount Elgon to be the embodiment of their founding father Masaba and refer to the mountain by this name.

At 4,000km²  Mt. Elgon has the largest volcanic base in the world (the Caldera). Located on the Uganda-Kenya border it is also the oldest and largest solitary, volcanic mountain in East Africa. Its vast form, 80km in diameter, rises more than 3,000m above the surrounding plains. The mountain’s cool heights offer respite from the hot plains below, with the higher altitudes providing a refuge for flora and fauna.

Mount Elgon National Park is home to over 300 species of birds, including the endangered Lammergeyer.  The higher slopes are protected by national parks in Uganda and Kenya, creating an extensive trans-boundary conservation area which has been declared a UNESCO Man & Biosphere Reserve.

A climb on Mt. Elgon’s deserted moorlands unveils a magnificent and uncluttered wilderness without the summit-oriented approach common to many mountains: the ultimate goal on reaching the top of Mt. Elgon is not the final ascent to the 4321m Wagagai Peak, but the descent into the vast 40km² caldera.

Many travellers find Mt. Elgon an exciting alternative to the more strenuous climbs in East Africa. It has many of the same attractions, with a milder climate and lower elevation, and requires no special equipment or technical experience.

The Sasa trail is the shortest but toughest route to the peaks, traversing the community land and allowing you to explore BaMasaba farming settlements and culture. The round trip takes four days and starts at Budadiri town at an elevation of 1,250m. The toughest climb of over 1,600m is completed on the first day, before crossing the park’s largest area of bamboo forest and passing Jackson’s Pool on the way to Wagagai Peak.

The Sipi trail (four to six days, 56km round trip) starts at 2,050m at the Kapkwai Forest Exploration Centre. It is the longest trail to the peaks, passing through the northwestern mountainside through Tutum Cave to enter the caldera and reach Wagagai Peak. The trail begins gently, but becomes tougher on the third day from Kajeri Camp. 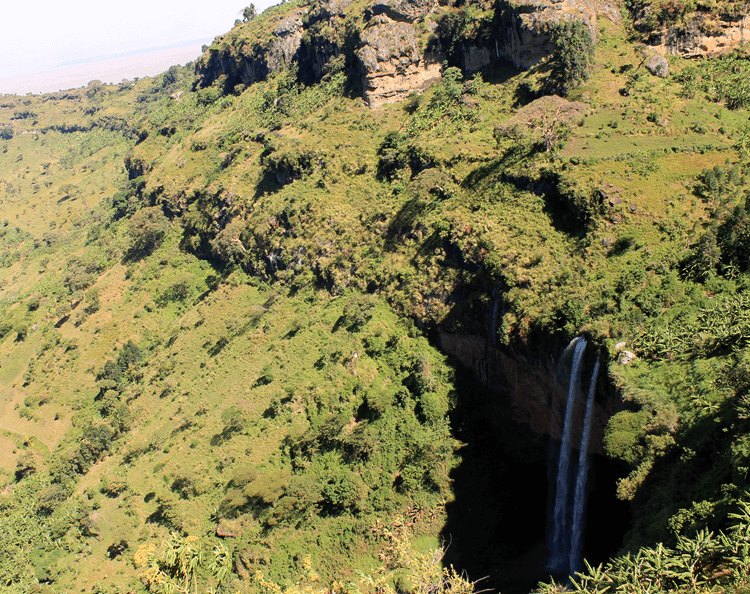 The Piswa trail (seven days, 49km round trip) is long and the gentlest trail. Starting at the village of Kapkwata on the north side of the mountain, it traverses the soft wood plantation to the Podocarpus forest. It’s notable for its rich wildlife and spectacular views of the Karamoja plains in Uganda and the Nandi and Kapeguria hills in Kenya. The Piswa trail also passes the hot springs on the way to the caldera and the peaks.

The various routes can be combines, ascending the Sipi/Piswa/Sasa Trail and descending along the Sasa/Sipi Trail for example. This allows a traverse of the caldera and a visit to the hot springs.

The higher slopes of Mount Elgon are shared with an adjacent national park in Kenya and a trans-boundary hike can be arranged. After ascending to the caldera with a UWA guide, climbers cross the border to descend with a Kenya Wildlife Service escort. 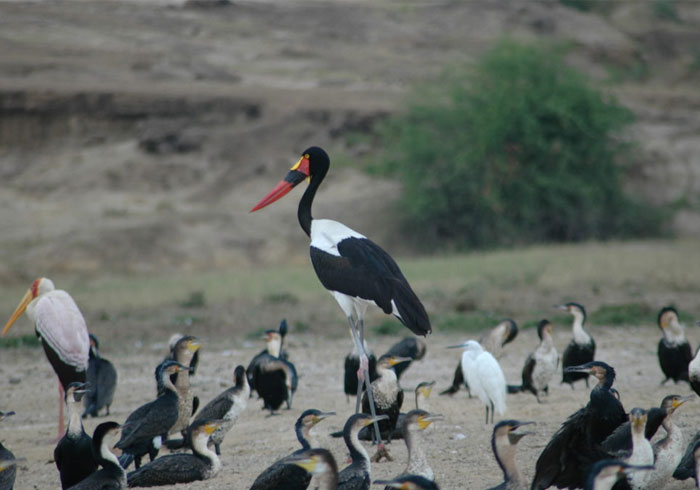 Enjoy views of Sipi Falls, the Walls of Death and the African sunrise across the Karamoja plains on these peacefull walks just outside Mt Elgon National Park.

A full-day nature hike leads from Budadiri to the Mudange cliffs, known as the Walls of Death, at the boundary of the national park. These cliffs are located in the tropical forest, and blue monkeys, black-and-white colobus and baboons are likely to cross your tracks. 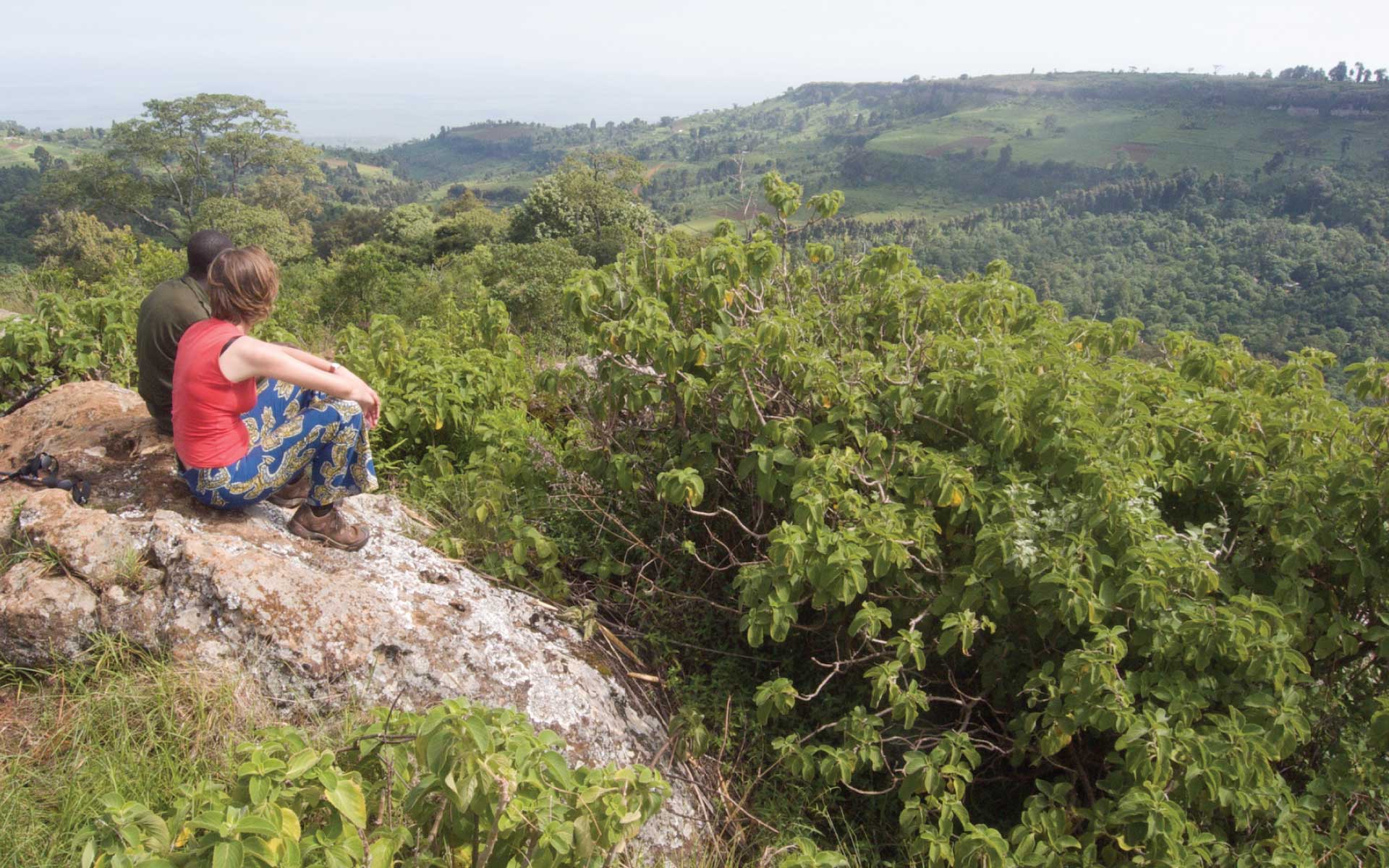 At Sipi Falls, guides from the local community can organize walks of a few hours up to a full day around local viewpoints. In Kapchorwa, a 20-minute Sunrise Trek at 6am from Noah’s Ark Hotel leads to the nearby Tewei Hill to watch dawn spreading across the vast Karamoja plains at the base of the mountain.

Rock climbing takes place outside the park at Sipi. There are 14 climbs requiring various levels of rock scaling techniques, and all equipment can be hired from the Sipi Falls Tourist Guides Association. The toughest is a 35m climb while the easiest is 15m. Both command a picturesque view of the main falls and the Karamoja plains.