Malaria cases sour in the mountains as climate change hits

When Ms Rose Nambozo, 62 a traditional farmer at the slopes of Mt Elgon in Zesui, Bugiboni village in Sironko district got down at the edge of Mt. Elgon and looked up the mountain, she remarked,

“If all the elders who died back in the 1960s, 1970s and 1980s came back to this place today, they would ask to go back, because they will not understand the environment today. There has been massive deforestation, settlement and the effects are high,”

Nambozo says she was raised on the foothills of Mount Elgon in Bugiboni village in Sironko district and that every night she would be lulled to sleep by the sound of the streams flowing down the mountain’s slopes towards the valleys.

She says these streams flowed through their plantations in the backyard and irrigated their crops in the gardens and those of the entire village.

She says as she grew older she would walk alone from Bugiboni Primary School, just a few kilometres from their house; she would be comforted by the soft gurgle of those streams.

“It was cold covered by natural trees and the children were happy to live in the homes that were at the slopes of Mt Elgon,” said Ms Nambozo.

“And today as a lie down to sleep, there is no soothing sound of meandering water, the streams have dried up. Now those villagers dig trenches and pray for the rain their crops now depend on,” said Ms Nambozo.

This is just one of many changes to the hilly landscape at Mt Elgon I have witnessed over the past few decades which has altered the lives of people in ways that were unimaginable to me as a child.

She said as children, they never experienced malaria when they were growing up at these slopes but that today there are many cases of malaria in the area.

“Last week I had a grandchild admitted for malaria at Budadiri Health Centre IV and this week I have another, I can’t understand this and this is not only one family but every family seems to be suffering from this,” said Ms Nambozo.

The Mt Elgon area conservation manager Mr Fred Kizza says malaria is becoming common at the hills because the people have cut down trees and the place has become warmer.

Mr Kizza adds that malaria transmission in the highlands such as Mt Elgon is seasonal but, the whole population is vulnerable now and that fatality rates during an epidemic can be up to 10 times greater than endemic areas because the people’s immune systems have never been exposed to malaria.

Mr Kiiza says that endemic areas such as those characterised with rainfall, high temperatures and humidity which is the perfect weather for the malaria parasite.

The paper published in 2012 says Mt Elgon sub-region malaria has become high and rampant in high altitude areas like 1800 meters above sea level in recent years.

“Malaria has even become common in areas of the high altitude which didn’t have malaria cases in the past. Injuries and loss of lives all have been attributed to the variation in climate besides other risk factor and until the populations living at the slopes of this mountain stop deforestation, malaria will continue to be high,” reads the report in part seen by PML Daily.

Environmental experts say that global warming induced by human activities has increased the risk of vector-borne diseases such as malaria in formally forested areas like Mt Elgon.

Experts are already worried that the destruction of Mt Elgon forests by big fires, set by farmers to clear land for agriculture, is helping to drive climate change and effects on human life.

An article titled; Rate of environmental degradation puts life on Earth at risk, by The Guardian [Jan 15, 2015] says of nine worldwide processes that underpin life on Earth, five have exceeded “safe” levels – human-driven climate change, deforestation, loss of biosphere integrity, land system change and the high level of phosphorus and nitrogen flowing into the water bodies due to fertilizer use.

“It is clear now at Mt Elgon that deforestation is one of the initial ecological factors that triggers malaria epidemic,” added Dr Wamasebu.

Dr Wamasebu, says as climate change rises, the higher parts of the mountains which were previously unsuitable for the breeding of mosquitoes are becoming favourable for mosquitoes; the vectors of malaria.

“And as the settlers continue degrading the environment, other diseases like yellow fever, dengue, Rocky Mountain spotted fever and Lyme disease will set in because many of these diseases linked to forest loss are spread by vectors,” Dr Wamasebu adds.

He added that malaria carrying mosquitoes now breed in the highest part of the mountain because they have become warmer due to massive loss of vegetation cover.

“Climate Change is caused by emissions such as carbon dioxide from production processes, which trap heat escaping to the atmosphere thereby causing global warming and that the warming of the earth disrupts rainfall patterns and leaves the hills warmer,” said Dr Wamasebu.

According to a malaria surveillance report for Mt Elgon region 2014,

39 percent of outpatient visits and 35 per cent of inpatient admissions in the medical centres around Mt Elgon sub-region are due to malaria.

“Prevalence of malaria in rural hilly Uganda is on the increase due to human induced climate change impacts and we suggest that more aggressive methods of controlling the disease should urgently be addressed,” reads the surveillance report by medical practitioners in Mt Elgon sub-region.

The World Health Organisation in a report entitled; Climate change and human health estimates that, by 2000, the global burden of diseases including malaria attributed to climate change had exceeded 150,000 excess deaths annually.

The report adds that climate change affects the social and environmental determinants of health – clean air, safe drinking water, sufficient food and secure shelter and that between 2030 and 2050, climate change is expected to cause approximately 250,000 additional deaths per year, from malaria, diarrhea, malnutrition and heat stress.

Dr Muhammed Mulongo, the Bulambuli District Health Officer says that highlands which have always been regarded as areas of little or no malaria transmission mainly because of low temperatures appear to be changing.

Dr Mulongo says due to the variations in climate and increase in the number of epidemics in highland areas, as well as a spread of endemics in highland fringes is indicated by several incidences and that among the various and prominent reasons explaining the apparent change in epidemiology have been attributed to climatic and ecological change caused by human beings.

Dr Pauline Byakika, a senior researcher on Malaria at the School of Medicine Makerere University College of Health Sciences says as climate change rises, the higher parts of the mountains which were previously unsuitable for the breeding of mosquitoes are becoming favourable for mosquitoes.

“Although prevalence of malaria used to be low in most hilly areas of the country, the disease is re-emerging in the highland areas due to a combination of climate and non-climate factors especially vast deforestation on the hills,” said Dr Byakika.

She adds that malaria epidemics in the context of climate risks is very high due to increasing but differentiated exposure to malaria risk, high sensitivity to malaria risk, and relatively low adaptive capacity, especially at most hills in the country.

“And without any intervention, rising temperatures and changes in rainfall patterns may intensify existing health risks and the risks may be exacerbated by other socio-economic trends such as population growth, poverty and environmental degradation.

Dr Byakika urges government to make positive strides towards establishing an enabling institutional and policy environment for reducing risks from disasters and for addressing climate change, as well as for malaria control.

The director health services (clinical and community), Dr Anthony Mbonye, says more than half of the children under 5 in the hills have the malaria parasite present in their blood, according to a survey by the aid group Doctors Without Borders.

“Fifty-nine percent of the Mt Elgon health center’s outpatient visits by children, and fully two-thirds of the visits by the rest of its outpatients, were spurred by the omnipresent mosquito-borne disease,” said Dr Mbonye.

Dr Okurut emphasized the importance of raising public awareness of the environment saying that should be the top issue in Uganda.

He said despite the fact that the public’s environmental awareness has significantly increased in Uganda; it has a long way to go to let every Ugandan know the importance of environment protection.

“People must be made aware of the environmental ecological destruction and pollution across the country in order to attract attention on environment and mobilise the society to protect the forests,” said Dr Okurut.

He said pressure from increased human populations, demand for fuel wood, building materials and other uses have put strain on the Mt Elgon forests over the years leading to decades of forest degradation.

“It is true, Mt Elgon now faces climate change impacts, because the mountain is faced with a high population pressure that is destroying the forest for settlement and clearing land for farming, “said Mr Cheptoris by phone.

Mr Cheptoris says that the recent decades have witnessed changes in the ecosystem and climate without precedent in human history although the emphasis in the role of temperature on the epidemiology of malaria has given way to predisposing conditions such as ecosystem changes and health policies.

“And besides the changes in the eco-system, there many of our species are threatened by environmental crime and habitat destruction,” added Mr Cheptoris.

He emphasized promotion of environmental awareness as the easy way to make everyone become an environmental steward and participate in creating a brighter future for the generations to come.

World Health Organisation estimates that, by 2000, the global burden of diseases including malaria attributed to climate change had exceeded 150,000 excess deaths annually.

Continuous increase in the transmission and distribution of infectious diseases worldwide malaria, typhoid fever is speculated by models estimating the effects of climate change while others for example will see a decrease in transmissibility due to excessive warming of some water as well as some regional drying (Gatrell & Elliott, 2009). 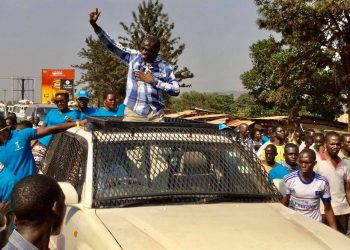