Following the recent public display of affection between King Saha and Spice Diana, Manager Roger, who doubles as lover and manager to Spice Diana is in tears after learning that the two are more than friends but have actually been warming each other’s beds for sometime now.

Last week both artists Spice Diana and King Saha were seen spending an evening together which started by Spice Diana joyfully trimming King Saha’s hair and the small voiced artist put up a picture saying, ‘new barber in town’

Spice Diana replied saying, ‘no one does it better!’ The two were later seen cozy with each other.

Sources close to both artists say this rather hideous relationship has been going on since last year.

Roger who has managed Spice Diana for two years now vented to a friend identified as Ray saying the 32 hit maker had been acting funny and suspicious for some months, putting a password in her phone which wasn’t the case before, going to the bathroom with her phone. 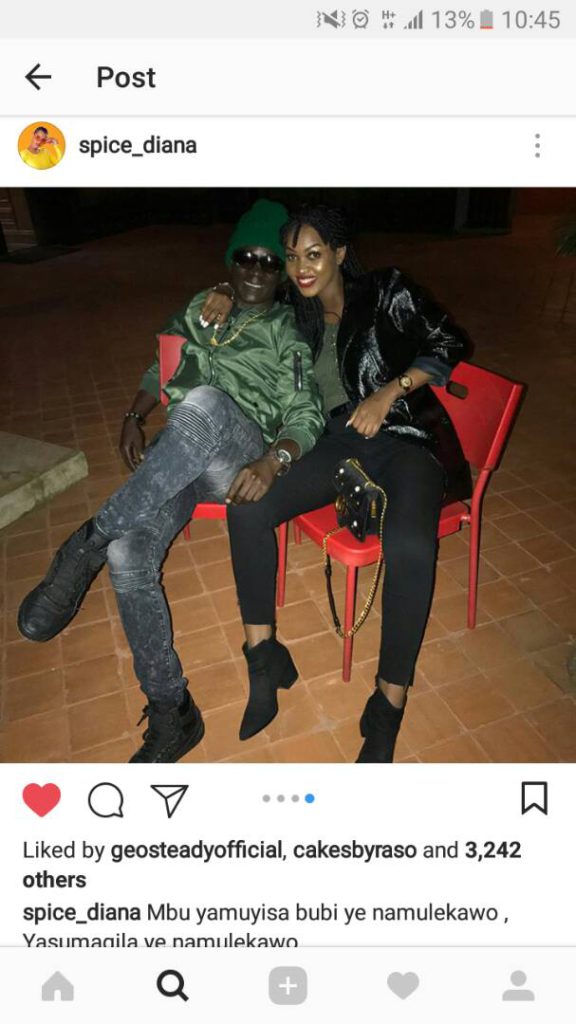 He further lamented that he took up Spice when she was nothing and he fought tooth and nail to see become the artist she is now, Roger in a message sent to his friend Ray says he staged a concert for Spice thinking he was doing all this for his wife to be but realized that the singer was only taking him for a ride.

Roger opened up a new music studio in Makindye, a Kampala surburd and named it 32 all in the names of surprising his girlfriend who was away in London during the Easter period where she performed alongside Weasel, Cindy, Eddy Kenzo, among others.

He says he was shocked when Spice Diana preferred to take a taxi when she returned from her trip but only to learn recently that it is Saha who picked her from the airport.

The bitter lover says he learnt of all this after Spice Diana accidentally left her phone behind when she suffered a running stomach, saying he almost collapsed having read the lovie dovie messages from the two artists and also says he came across a sex tape of the two (Spice and Saha) which he promised to release if the two do not call off their relationship.