Culture stands in the way of GBV successful fight

KAMPALA–In most cultures in Uganda, women are made to play certain roles – to look and behave certain ways – in order to make men control culture.

Culture often acts as a defense in regard to women’s conditions, status, roles and behaviors by carving out a separate space that is more often than not immune to political and legal checks.

Ms Bena Namono, a housewife turned Gender Based Violence activist, says many cultures and societies have given the patriarchy much lease on controlling women, with little or no outside intervention.

‘And GBV in Uganda is more widespread than many of us imagine among the societies where culture and tradition is very strong,” adds Ms Namono.

She explained that the given the existence of the deep-seated cultural practices and stigma surrounding it means that many cases go unreported, even as victims suffer untold physical pain and emotional anguish.

Ms Namono says there are certain cultural practices in Uganda which, by their very nature, purport to sanitise and justify sexual, emotional and physical violence against women.

Amongst the Bagisu at the slopes of Mt Elgon when a man beats up his wife, for instance, this is considered an acceptable method of instilling discipline here; hence the community leaders rarely intervene, often passing it off as a “small domestic matter”.

“I grew up seeing my mother being beaten and relatives would only come and say these are small matters which families go through. And when I got married, my husband beat me up daily until I got a hearing problem in the name of culture; I walked away from marriage,” Namono said.

Ms Stella Atiang, the Moroto district Woman MP, says amongst the Karimojong, when a girl is raped, it is regarded as a normal way of expressing love to a girl. Rape is culture here!” she explained.

“Unless rape is affected and virginity lost, the girl remains at large; the suitor here then works with a team who spy on the virgin, to monitor her movements. Sometimes, she is waylaid when she is collecting firewood, watering the animals or in the garden, and taken to an isolated place where the suitor rapes her,” says Ms Atiang.

She adds that after the rape, the other virgins do not associate with the rape victim freely because they expect her to enter the courtship phase, which could last up to five years and if the girl abandons her suitor, she will be called a prostitute.

“And so the girls has no choice but to continue with the process of courtship until marriage,” Atiang adds.
She explained that the local leaders and police are aware of the entire process, and their silence equals complicity while pressure is mounting from rights groups to ban the practice, it is deeply engraved in the lives of the people of Karamoja.

“Whereas men find solace on their stools for meetings, the culture here does not allow women to attend clan/village meetings and you are expected to sit away in silence. You are not expected to divorce even when your husband does not want you, beats you daily, men are kings here,” said Ms Atiang.

The Karimojong are a cluster of culturally related people stuck strongly to their traditional and cultural values governed by the traditional justice system that has seen many a woman oppressed, many a people hanged for committing petty crimes and others jailed in a pit dug in the ground as punishment.

“The issue here is not whether it is good or not for women, but as long as men deem it good. And this explains why rape and defilement are not an issue here,” says Ms Atiang.

In Kapchorwa, Kween, Bukwo, Amudat and Moroto where Female Genital Mutilation is, girls between the ages of 13 to 16 are sought and circumcised mercilessly in the name of culture and later forced into marriage.

Ms Beatrice Chelangat, the executive director of Reproductive Educative and Community Health, an NGO that is fighting FGM says young girls in Sebei are expected to undergo FGM before they can be regarded as women and perform other duties such as attending village meetings, serving food to newly-circumcised boys, smearing houses, getting food from granaries as well as being leaders or speaking in public.

She adds that the misery these girls go through typifies the misfortune faced by thousands of young across Africa where tradition does not give them an opportunity to speak their mind and say no to FGM.

“And for us changing the life style of the traditional people still held up in this outdated culture at the slopes of Mt Elgon in order to end FGM is proving a headache to us as young girls suffer and are forced into teenage marriages,” said Ms Chelangat

Ms Chelangat, an FGM survivor says the GBV is rooted in the unequal power relations between men and women and some of the key drivers of this violent streak are culture, subordination of women, economic and political factors that increase the vulnerability of women and girls.

She added that such GBV is an extremely complex phenomenon with roots in many biological, social, cultural, economic and political factors, often borne out of unequal power relations.

Ms Claudia Kakwenzire, a teacher at Mbale bright parents primary school, says In Western Uganda the Bakiga are referred to as wife beaters and are known for their hard work and valor.

She added that they talk violently and have the shortest tempers in the country and that they are known to accept fights easily more so when offended.

“And there is high incidents of GBV here because culturally the men here drink heavily and most of the beatings are intended to exert control over their wives who are expected to follow the whims of their husbands religiously,” said Ms Kakwenzire

In Nothern Beatrice Akello, a Gender Based Violence activist from Kole district says among the Luo in northern, their culture applaud polygamous marriages and their homes are run with an iron hand.

“In the home of a typical Northerner, culture gives a lot of powers to the man. The man therefore runs the show and children and women are expected to simply take instructions from the head of the family without any question,” said Ms Akello.

She adds that with this kind of mind set, wife beating and general domestic violence tends to be highly prevalent.

She adds that in the North where beating has been entrenched into the traditions of the people, some women have been found to associate beatings with love. “They actually feel unloved if they are not regularly beaten by their hubbies,” says Ms Akell.

She explained that traditionally, the Acholis, the Madi and the Langi of Northern Uganda, come back home carrying home a pile of sticks to beat wives.

Ms Dora Kiconco, the executive director The Uganda Network on Law, Ethics and HIV/AIDS (UGANET), an NGO involved in the fight against GBV and HIV says both men and women are victims GBV, although women bear the brunt of the practice.

She explained that men abuse women through battery, use of abusive language, not providing some requirements and overworking them, whereas women abuse men by not giving them food and engaging in extra marital affairs.

“Our culture is good. We cannot do without it, abandon it or condemn it. But GBV is real and rooted in the negative cultural practices which are not fit for the well- being on society,” Ms Kiconco said.
Association chairperson Monica Amoding says although government has initiated programmes to reduce vulnerabilities of women and girls experiencing violence in Uganda and improve access to justice, culture stands in its way.
She said Uganda has set the policy frameworks and structures for gender based violence (GBV) prevention and response which includes the Domestic Violence Act of 2010, the prevention of Trafficking in Person Act (2009), and the Prohibition of Female Genital Mutilation Act (2010) but that GBV still remains high.

The Speaker of Parliament Ms Rebecca Kadaga while addressing UWOPA members at Imperial Royale Hotel in Kampala on GBV said despite this intervention, there are several women and girls who continue to suffer in silence because they cannot afford court fees and transport to courts to testify while others have lost hope in the justice system because of the lengthy court procedures.

“And my mind broods over the numerous women who have lived through this experience and the girls who have to grow up knowing their right to choose when and if to have sex and become mothers are snatched away in the name of culture. We have a lot of work to do to change the world, even if it’s just one person at a time,” said Ms Kadaga.

She explained that both men and women are victims of gender-based violence, although women bear the brunt of the practice and that men abuse women through battery, use of abusive language, not providing some requirements and overworking them, whereas women abuse men by not giving them food and engaging in extra marital affairs.

Ms Kadaga attributed the rampant gender-based violence to lack of mechanisms in society to bring the culprits to book adding that society just transfers head teacher/teacher who has defiled a girl to another school instead of deregistering him to end this kind of abuse in schools.

“Imagine women routinely subjected to assault, rape, sexual slavery, arbitrary imprisonment, torture, verbal abuse, mutilation, even murder – all because they were born into a particular culture. It should be known that it is cultural practices and beliefs which perpetuate gender-based violence,” said Ms Kadaga. 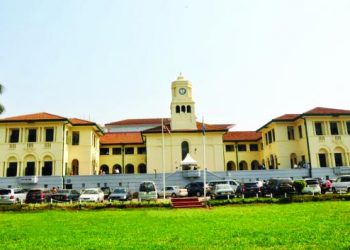