Namawejje,  a resident of Boston Village in Makindye Division and a dealer in cosmetics products branded Aunt Lususu on Thursday appeared at Standards and Utilities Court Division of Buganda Road Court presided over by  Grade One magistrate Gladys Kamasanyu.

Court has ordered Aunt Lususu  to pay a cash bail of Shs1 million and to deposit her original motor vehicle logbook before being granted bail.

Her two sureties  have also been ordered to sign a non-cash bond of  Shs100 million each,  deposit their original car logbooks before court, land titles and land agreements respectively.

The case has been adjourned to February 19 for hearing, after prosecution from UNBS offices informed court that investigations into the matter are over.

In a raid on the company, UNBS officers discovered that the cosmetics seller was illegally using the UNBS quality mark in addition to selling banned products ‘in contravention of the UNBS Act and the Uganda Standards on specifications for Petroleum Jelly (US191) and general requirements for labelling cosmetics (US 346).’

UNBS and police have since initiated legal proceedings against the Sure Deal Beauty Centre and its directors. 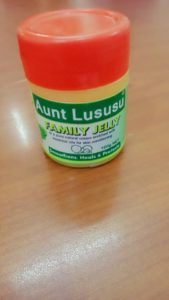